Lavender Ranger Editorial: What if Power Rangers were at Universal Orlando Resort?

As we all know, when Disney owned the Power Rangers and they were at the park Hollywood Studios only at a meet and greet and part of a parade. They never had an attraction, partly because Disney purists were against it. There were only rumors but nothing solid. I went to Universal's Islands of Adventure this past weekend. The following is just speculation and my own invention, there is nothing at all in true. There are no rumors or official statements that Saban and Universal are planning anything. I just want to make that clear. People constantly e-mail or leave me comments in misunderstanding what I wrote. 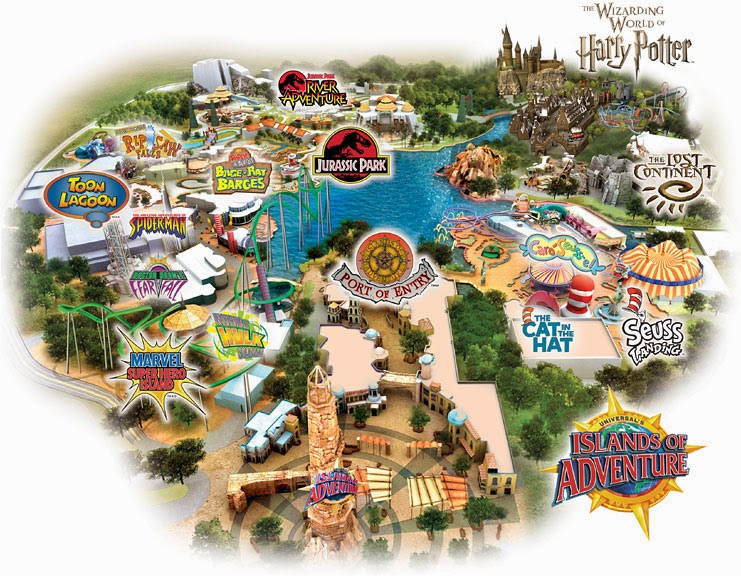 So going to the park, I start imagining where a Power Ranger attraction or rather an Island would fit in. I mean, they could have something small at Universal Studios Orlando but I like to dream big like an Island. Mostly because they have the Marvel Superhero Island and with the new deal with Disney, Universal is not allowed to make new attractions based on the new Marvel movies (although they have Captain America and Thor statues in the gift shops). The Spider-Man and Hulk attractions still draw crowds so Universal might not let it go. But these parks always like updating. And they can't. So Power Rangers would fit in there great. Another spot would be Lost Continent, which isn't a franchise and is original to the park. Fans suspect the long rumored Lord of the Rings might get a land here. But let's explore it... 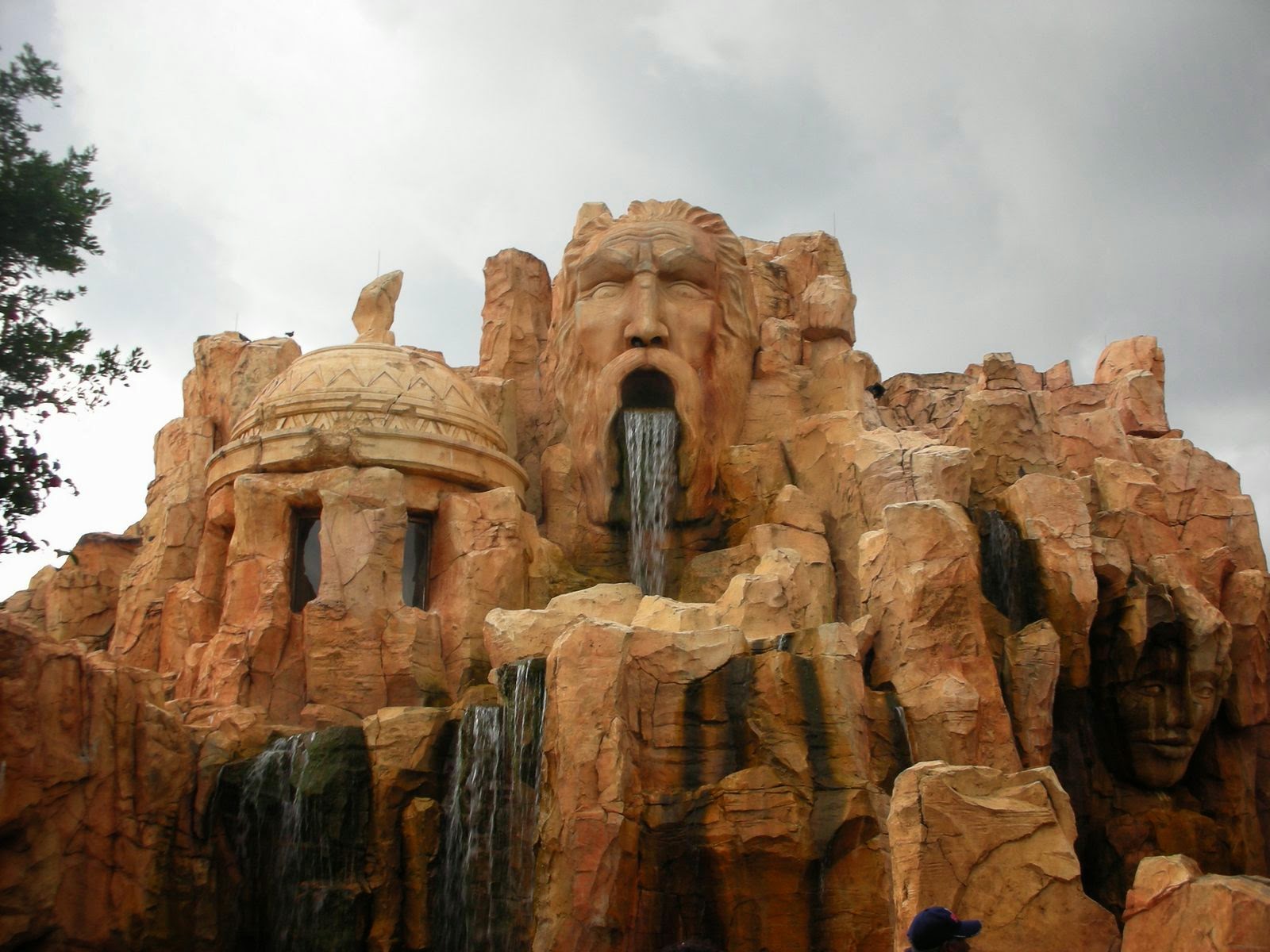 Lost Continent started with the park since the beginning in 1999 and part of it, the fantasy part was taken and changed to Harry Potter. What is left is the number one rated theme park restaurant Mythos (above), Neptune tour attraction and Sinbad stunt show. I went to the restaurant and it is great. It has this giant waterfall on the other side you can see from the Suess land or the enter port. A Power Rangers theme anything here would obviously would be the Command Center and changing the rocks to mountain peaks. 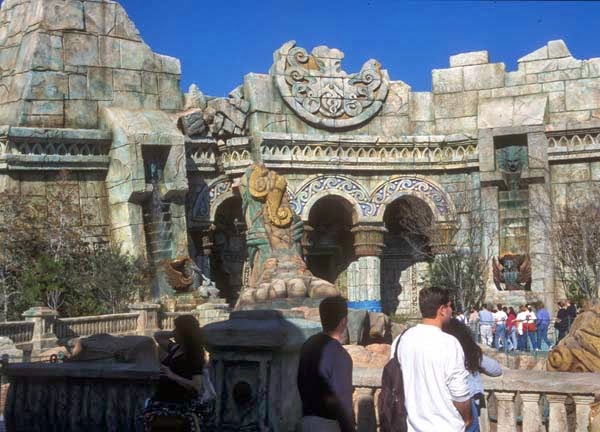 The Neptune building is big and beautiful and would be completely change outside to be anything Power Rangers. This is a walking tour with special effects, this would great as a tour from different teams like maybe the most popular ones like RPM, In Space, etc. This attraction to meld theme together in like Super Legends game. 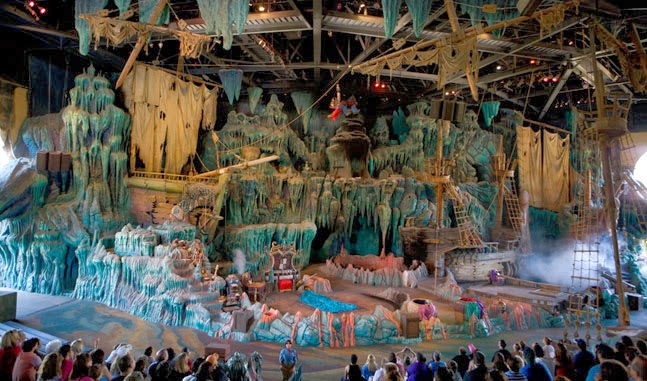 The Sinbad stunt stageshow is in a massive ampatheater (well as big as the one in Universal Studios). This would be great to incorporate various places but it would be cool if it was like "Forever Red" where all the Rangers have to go the moon to Zedd's old palace and fight Zedd reincarnate. It would be great to get all Red Rangers or a couple teams together. Or maybe the current team (which would be Dino Charge at this point) along with past Red Rangers. 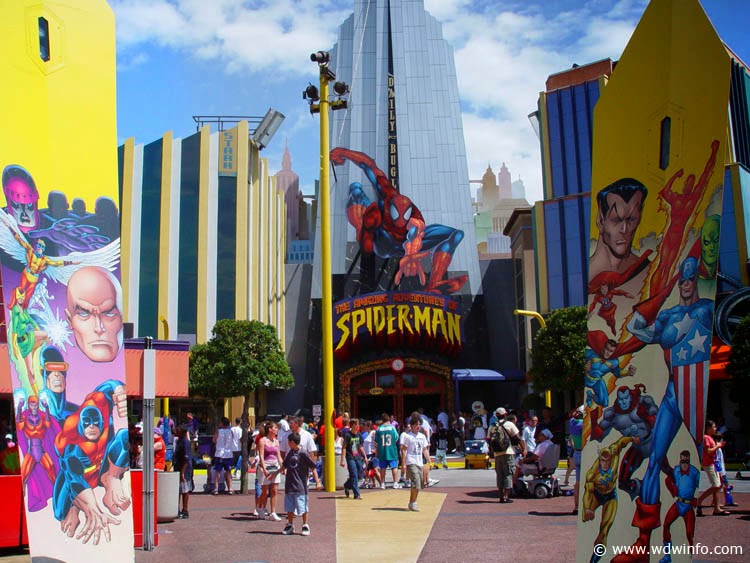 They could also use the Marvel Superhero Island, which would be ideal. My dream would be Marvel would move to Disney resorts and that Universal would have to find something new. A Power Ranger Island would be awesome. As this island is based on comics and New York, it could easily be changed to different Power Ranger cities like Angel Grove, Mariner Bay, Silver Hills, Corinth, and wherever the new seasons are held. The Marvel heroes appear at different hours on the island, they can continue this with different Rangers from different teams. Spider-Man has a special place in a shop for a meet and greet, they can do this with the Mighty Morphin Rangers like Red, Green, White and Pink. Since they only have 8 superheroes for meet and greets, realistically they have to go with 8 Rangers like Disney, from different teams. But since this is my fantasy, I would go with two members from each team (male and female or female and sixth). But if I had to pick eight I would go with: Red Dino Charge, Green Super Megaforce, Yellow Megaforce, Blue Samurai, Black RPM, Violet Jungle Fury (Of course), Pink Zeo and Titanium Ranger. 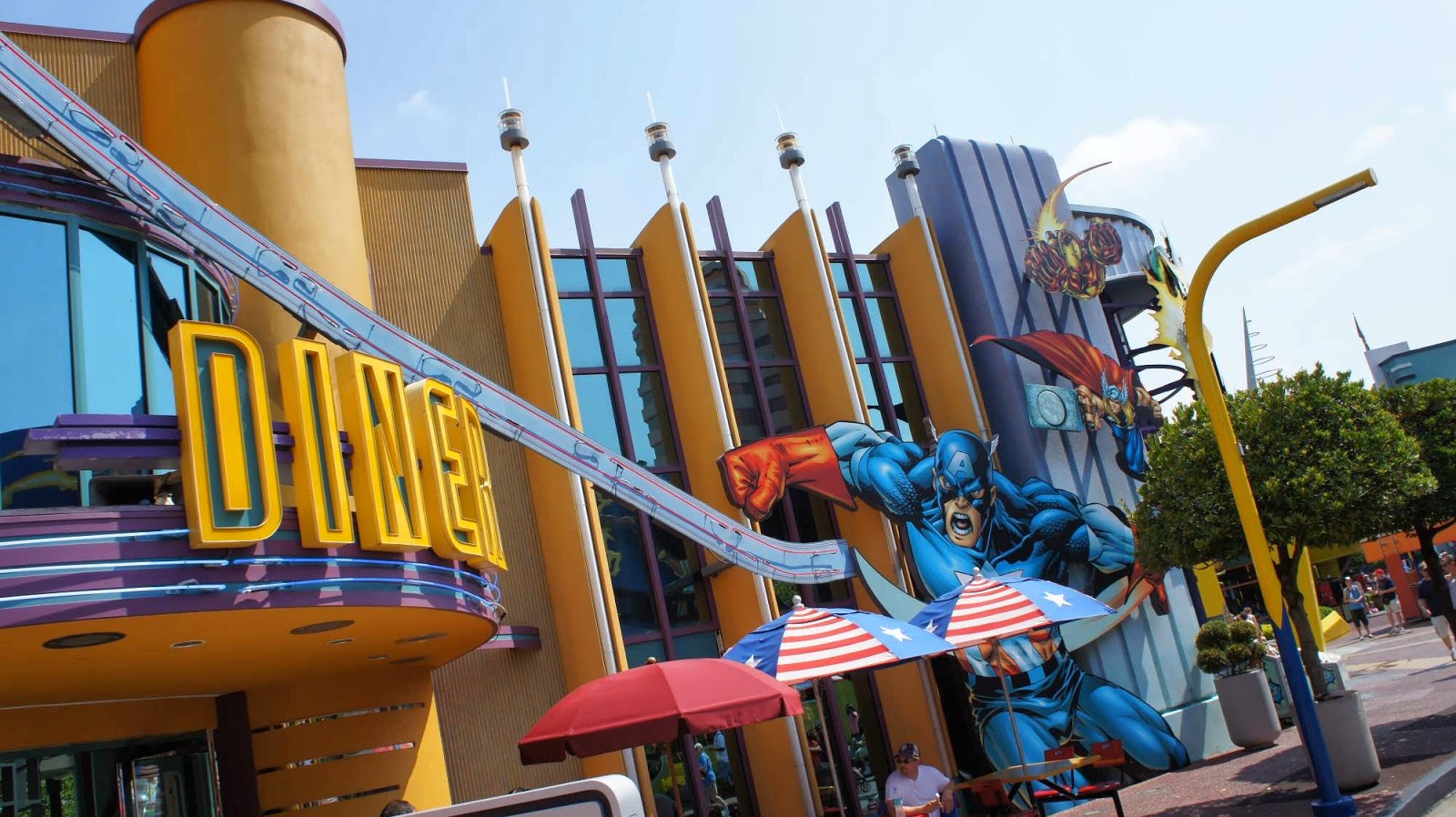 All of the buildings have simple titles like Diner, Comics, Shop, Arcade, etc. They could keep that. Lots of the comic book characters are large cardboards on top of the buildings, they can continue that with various Rangers. Of course they would have to change the diner to the Ernie's Angel Grove Juice Bar, they can recreate the very same Juice Bar from Mighty Morphin with gym, arcade and all.

The Storm force accelatron teacups could be easily changed to different Power Ranger teacups. I easily see them in different colors. 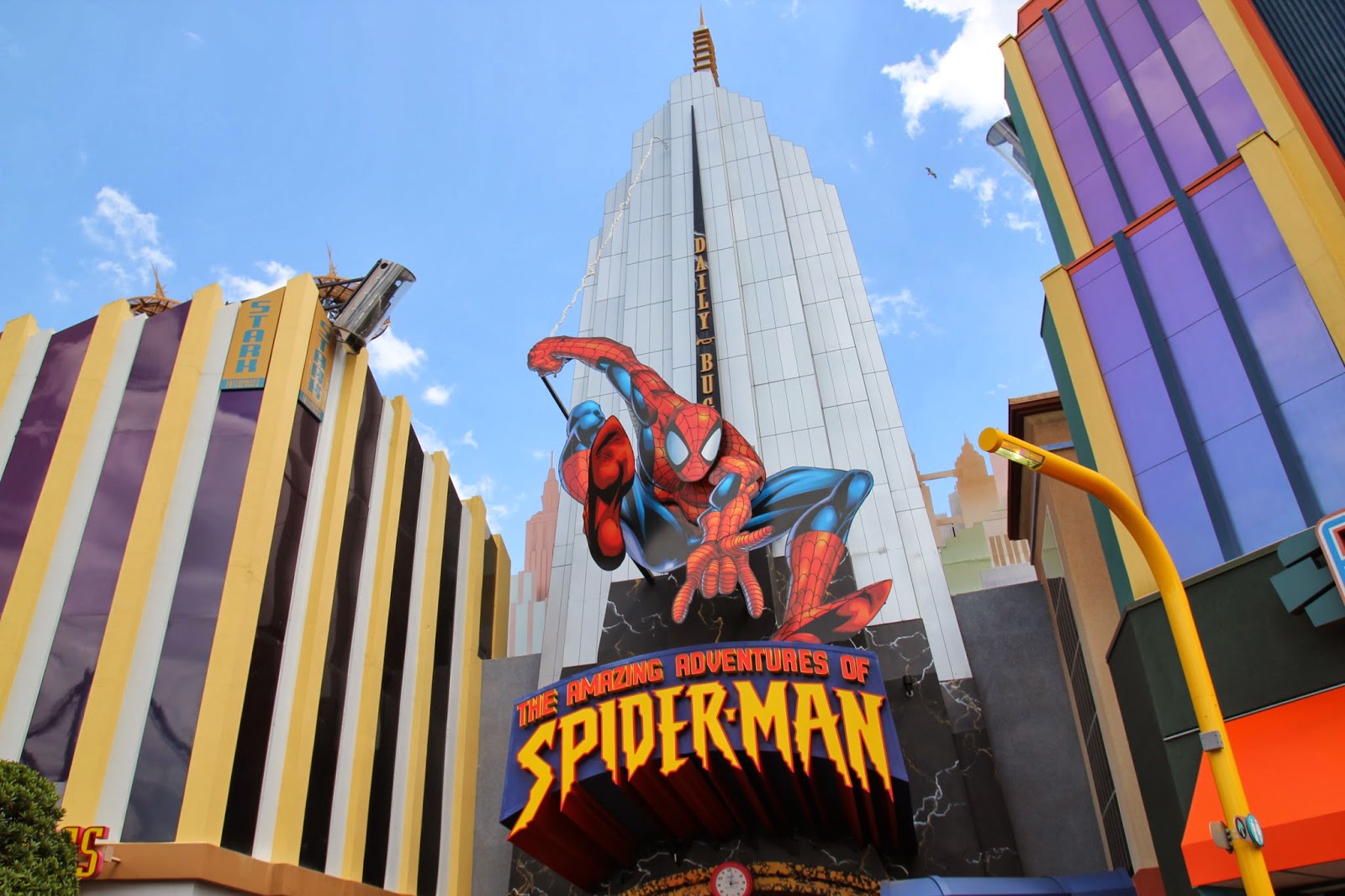 The Amazing Adventures of Spider-Man is a 3-D attraction that combines hydraulics, big screens, fire, water and other special effects. It is the most popular attraction there. It could become like I said before, a Super Legends sort of thing or like Back to the Future where they go to different times. They could follow a common villain to different worlds like Mirinoi, SPD future, Corinth RPM dimension, the Moon and other places. This would be a hard change but not too difficult. They would have change the exterior drastically, the inside queue is the Daily Bugle, it would have to be changed to the Command Center or something. When you enter, you can see Tensou on the screen saying we aren't allowed in there but then saying they need help, then the area that was the newspaper office could be changed to little kiosks about past teams (the monitors with news could be the same but Power Ranger themes) and then the big room with Jamenson on screen could explain the story. 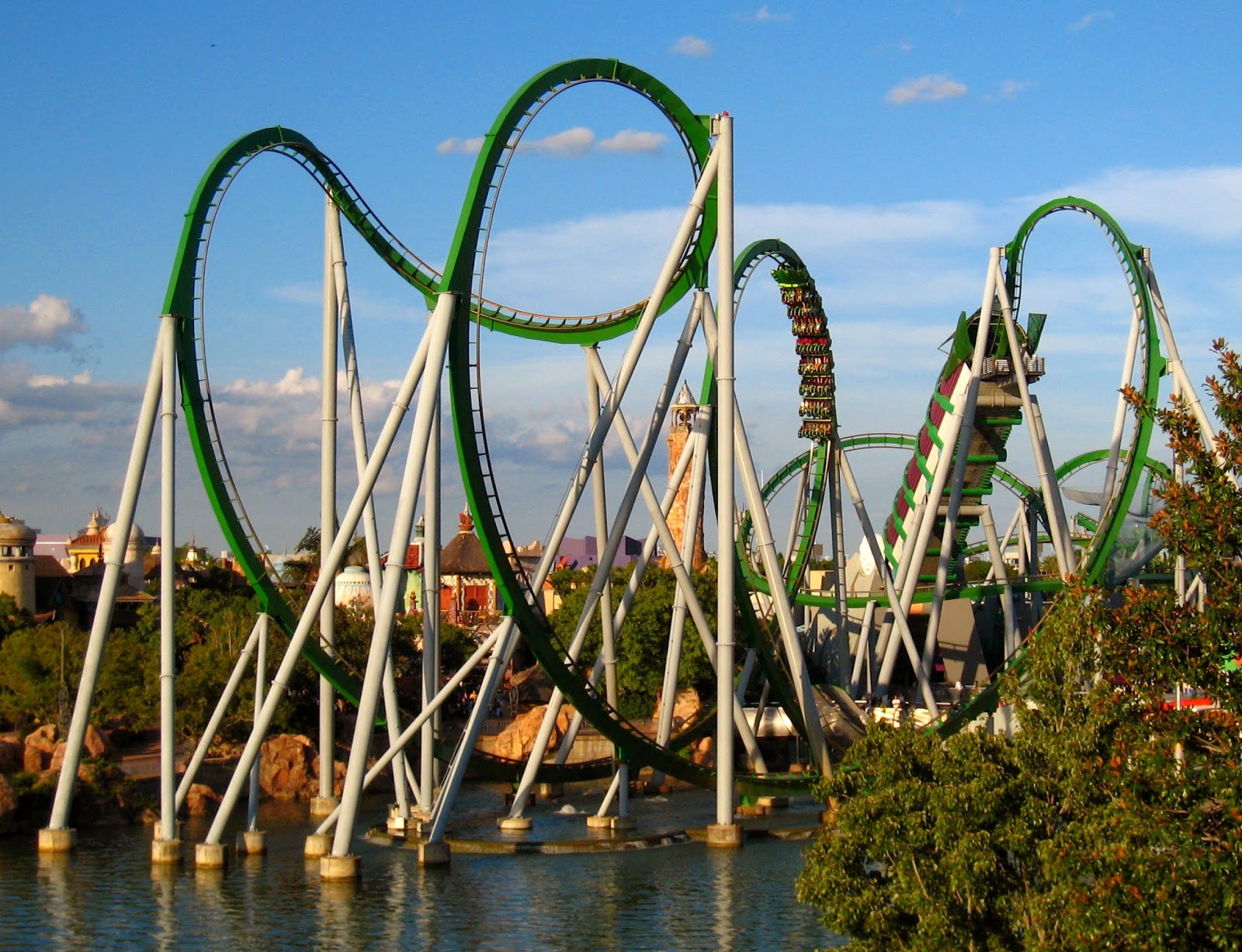 The Hulk rollercoaster would be an easy refurbishment, they could keep it green but since green is so iconic with Hulk and they would want to show people it has changed, they would have to change it to another color, maybe red or silver. I didn't go on this ride so I do not know if it has a queue.
﻿
Posted by Lavender Ranger at 9:38 PM

I like the idea of a Power Rangers attraction at Universal Studios Orlando.