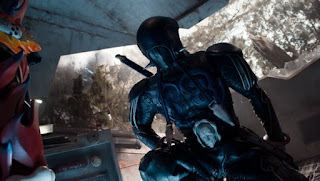 Summary:
Heckyl is not enthused by Fury's plan. Shinge comes in with Ninja and a plan to put a virus in the weapons of the Rangers. Tyler takes the Rangers with a crayon map to find a box of letters and mementos. The other Rangers are supportive. Tyler puts a Dino Bite Cafe in the box, saying his friends are important. Shelby says thanks for saying sharing it. Later Red Ranger blasts targets on his bike with his morpher. Shelby says he only hit four and before he hit all six. Ninja comes in and puts in the virus. 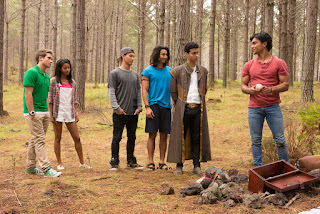 Kendall keeps the Red energem to make the Super Charger. Tyler takes out a map from Rusty where the cave-in happenw ith James. There is a flood, he wants to hold his breath. Shelby thinks his dad maybe haven't survived. Tyler is peeved, thinking she wanted him to five up. He runs off. Ninja comes in. Tyler awakes in a daze. A light blue foot kicks him and fights Ninja. Ninja runs off. Tyler gets up. Back at the base, Kendall says the new charge responds to the T-Rex energy. Riley activates the weapons program, the virus goes through. 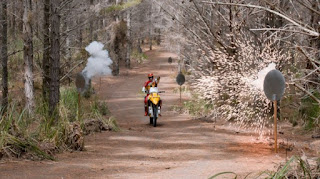 Tyler returns all hurt, saying a monster attacked him and he think he saw the Aqua Ranger. Keeper asks for his identity. He thinks it might be Rusty as he spoke about his Energem. Keeper says they can add extra strength. Shelby wants to talk, Tyler says there is nothing to discuss. Outside with all the Rangers (even Kendall morphed), Tyler calls the Super Charger and it shocks him. He becomes like a T-Rex and his helmet roars. Kendall tries helping but is knocked off and pounced on by Tyler. Ivan and Riley de-morph after being knocked off by Tyler. Kendall heads off to the base. 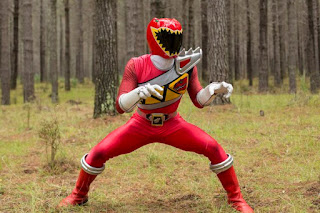 She finds there is a virus there, knowing it is Heckyl. The T-Rex spirit has taken over Tyler. He roars at Night. Back at the ship, Snide threatens Shinge. Shinge has another monster to hunt for Tyler. Snide says he doesn't like Shinge. Kendall gives the Rangers a Hypno Charger and Super Charger as they hop in the jeep. Shelby asks if the real Tyler is in there. She shows them his crayon map. The hunter monster is after Tyler and the Rangers see him. Koda detects Ninja and kicks him. The Hunter monster arrives and they crowd the Rangers as they morph. Chase goes after Tyler. 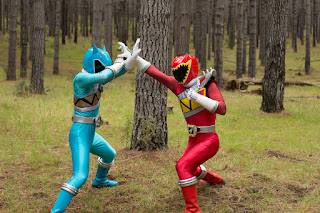 Riley and Ivan fight Ninja. Hunter fights Koda and Shelby. The Rangers are knocked down. Chase calls out for Tyler and finds his box o memories. He spots a pic of Tyler's dad and Tyler when little. The infected Tyler comes near him and is hit by the Hypno blast but it wears off and he tackles him. Aqua Ranger comes in and stops Tyler. Aqua says he won't hurt him and defends himself against Red and calls him Tyler. He de-morphs. Chase is shocked. James shows him the baseball when he was a kid. Tyler returns to normal and James picks him up. They hug. Riley calls Chase, he tells them they are on the way. 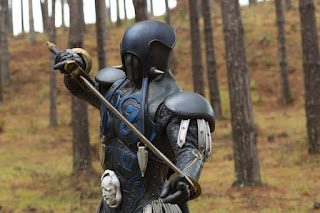 Chase tells Tyler Shelby knew he would be there. Tyler, James and Black Ranger arrive to the two monster site and instamorph. They blast away the Hunter monster and he leaves. 7 Rangers aginst Ninja. Chase gives Tyler the super-charger. He calls for the Super T-Rex, T-Rex becomes cute and little and he dons the armor. He fights Ninja in a barrage of explosions. Ninja tries throwing ninja stars to no avail against Tyler. Tyler blasts him down. The little zord attack him. Tyler does a big kick and chomp. He combines the two morphers and does the final strike on Ninja. Magna Beam makes Ninja big. T-Rex goes big too and the Rangers summon Brachio and Plesio. Plesio Charge Pachy-Rex is formed. The Rangers call the Dino Drive mode and then go Dino Super Drive. Aqua Ranger says it is awesome as he enters the cockpit. Ninja throws more ninja stars. They do T-Rex Power Blast and Galactic Blast and destroy the monster. 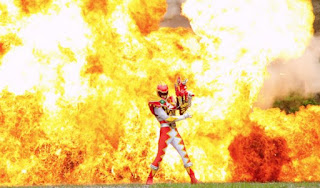 Back at the ship, Hunter says they know where the Aqua Gem is. Fury says thanks to him there is one more Ranger. Heckyl is about to destroy him. Shinge they need Hunter as bait. Heckyl is intrigued. Back at the box, James says he found the Energem when the cave collapsed ten years ago. Rusty is there too and he knew James was a Ranger but they didn't know there was more Energems. Shelby and Tyler make up. James says he was hiding for years and was relived to find out he was a Ranger. He saw everuything happened. Shelby says never giving up happen in the family. Tyler and James catch up playing baseball as the others leave. 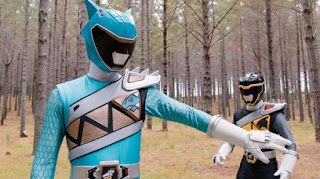 Review:
Everyone was complaining about Tyler not explaining his story and Rusty having lied, I think there is subtext about James not being able to be un-aging in public (maybe he thought Tyler couldn't handle an immortal dad) and Rusty contacted Tyler in other to find out what he was doing. But it is screwed up James never sent Tyler a letter or anything to let him know he was okay. I agree the ep is a little rushed as they squeezed two eps in there. It isn't as rushed as other seasons though.
Posted by Lavender Ranger at 6:00 PM

If you thought this week was rushed, just wait until next week, when the source footage will likely be Braves 28-29, meaning they have to squeeze in:

- The already announced plot of Tyler and James repairing Tyler's Energem
- The debut of Zenowing and the basics of his backstory (to explain why he seems evil at first, but isn't), unless they decide not to have a Zord battle and save him for later (but then what is Singe's new plan going to be?)
- Fury and Singe's feud coming to a head for the time being, since Singe vanishes from Sentai footage for roughly 12 episodes after Brave 29 (unless Chip was lying to us about having to rely more on Sentai footage this season)

What’s with Saban Dumbing down on the Color name by changing Cyan to Aqua? Aqua would make sense if there was a water theme to the Cyan ranger, but his zord is an ankylosaurus which is the dinosaur equivalent of a cow with a mace for a tail no water theme once so ever. It’s not like Cyan is a japanese color name that needed translated it is a globally accepted name for a specific shade of light blue.