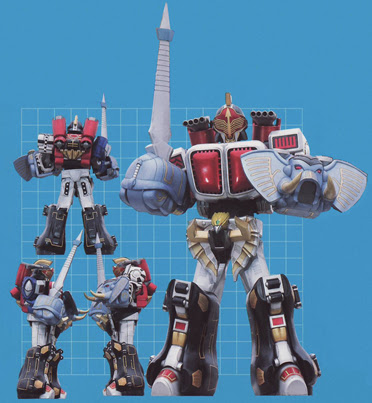 Highest Mecha combination: (6) The robot with the most mecha was GaoKnight and GaoKing Sword and Shield Mode, which had six.

Highest Mecha Combination: (8 to 17 or 22) The highest mecha combination would be when TenraiSenpuujin would climb on top of Revolver Mammoth and shoot out Karakuri Balls. 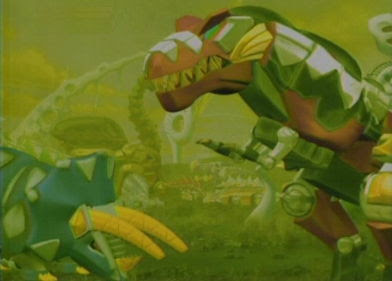 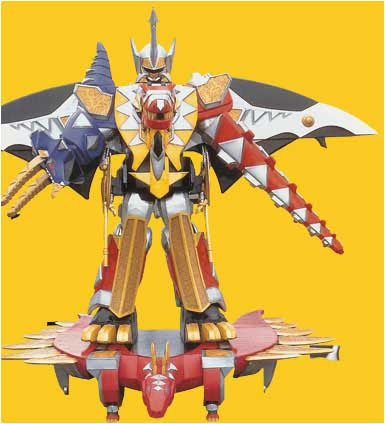 Highest Mecha Combinations: (7) The highest amount of mecha combination would be OoabarenOh, that had Tyranno, Triceratops, Ptera, Top Galer, Stegosraidon, RhanphoGolds and SpinoGold (helmet and weapon).

Highest Mecha Combinations: (10) The highest mecha combination was Ultimate DaiBouken, that had 10 mecha at one time. 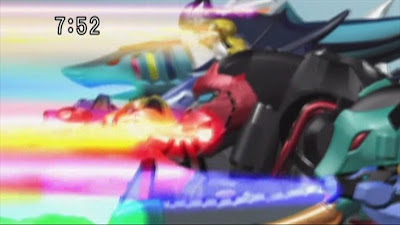 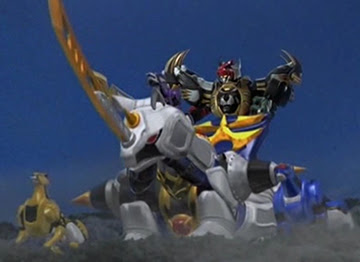 Posted by Lavender Ranger at 2:08 PM

How many combination (it's not 1 gattai combination - more like variation) appeared in the series.

And for gaoranger, I thought more than 17+6 ?
5 from gaoking, 5 from icarus, 3 from gaohunter (although gaoligator change color later - there are 2 toys), 3 from gaomuscle (armadillo and rhino counted from icarus), 1 gao elephant, and 1 soul bird (or this is not counted?), 1 gao kong, and 5 from gaogod. There is 1 more toy - gaopanda.

Oh yeah, it might be interesting to review the recolor version of mecha in the series (not toy recolor). What I mean for example
*gaoking vs gaogod
*abarenoh vs bakureno
*engine oh vs engine daishogun

I'll think about it, but man, that is alot. It's on my website supersentai.com if that is an incentive.