Many fans don't want to accept the fact that there will not be a live-action 2010 Power Ranger TV series next year, but they got to face the facts. Shooting wrapped in New Zealand for all Power Rangers and prop/costume shipping from Japan to New Zealand usually happens around this time and it hasn't as of yet. I have been told by one of my insiders, told from a reliable source that Bandai America is releasing a 2010 toy line for Power Rangers in the United States. Parents would want to buy new Power Ranger figures for their kids for Christmas, which is when the new line is usually released. So just because we might see a new toy line, it won't mean there will be a series. 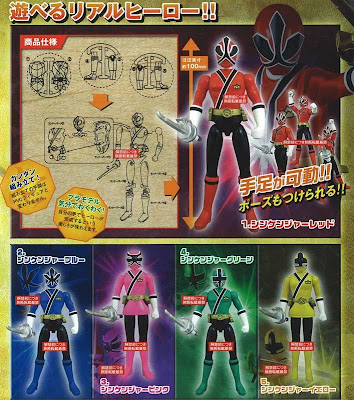 Bandai America released that statement that the show will not end and that according to my very reliable source, it made Disney angry. Bandai America doesn't have the final say! One rumor is that the only reason we have the RPM series is because they released the toy line. But according to my source, most likely, this is not gonna happen again. I mean, they closed up shop in New Zealand. Basically the reason Disney has canceled Power Rangers is because of costs and they wanted to go animated, because they want to be in control of everything. This same source says that they want to cut Toei and Plex out of the equation of the toys. Plex and Toei designs the toys. Disney wants their own people to design the toys so they get their own money. Toei is part owner of the Power Rangers so they have final say and have been against an animated series. We won't know what will happen for a couple of months.

Sidenote: The above picture of Shinkenger toys. 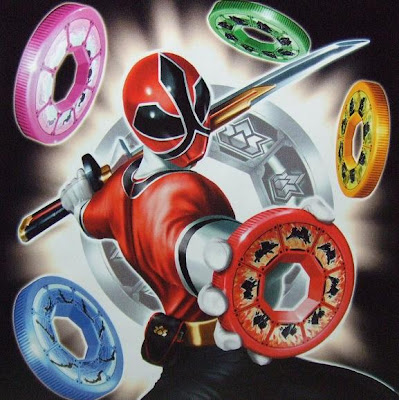 Since Disney took over the franchise back with Wild Force, it has been prohibited Power Rangers material being exposed in Japan. Power Rangers used to air in Japan, for example: Lightspeed Rescue, etc. It is said that Disney bought the rights to Goranger to Jetman, so another company would not release them on DVD subtitled or dubbed to avoid competition and confusion. It is a Disney company decision to cancel the show and they don't want to do it anymore and if they don't want to release an official statement, then they won't. When the majority of television shows are canceled, no statement is ever released, only a few lucky shows have had that pleasure to have a statement about cancellation. I guess no one will be convinced until there is nothing on the airwaves in next March. Maybe people think I don't want the show to continue. I don't want it to end, in my personal opinion, it will come back in some form. I just want people to face facts.

Posted by Lavender Ranger at 12:55 PM

"it made Disney angry" were is your soruce for this stuff? how would YOU know?

ive googled it and i cant find the satement were disney officialy ended Power Rangers... and the producer's statement is not offiial she said "at THIS stage..."

doesnt mean its ending it means theres a possibility


back this up and ill believe you

It sounds cliche but I can not reveal my sources. But this one source is very reliable, has had the privilege of going to the Wild Force set and also the RPM set. I know this source for 5 years.

You don't have to believe me, btw.

ok, i understand that a high possibility of power rangers is ending is true but i think i will be more comfortable hearing it from disney because this is really confusing n it hurts my head...

I don't want to smash no one's dreams. You're right, we should hear from Disney.

One question: Disney buying the rights of pre-MMPR sentai series, is that confirmed or is just some kind of 'urban legend'?

(And please, forgive my bad English).

Wingspan, your English is fine. According to my reliable source, they did buy the pre-zyuranger series, because if they didn't, then we would have official sentai dvds in America and power ranger dvds in Japan, but they no longer sell them in Japan.

Mmmm, you know? Maybe it's better that way. If no one can bring super sentai to U.S.A., fansubs will be made without any problem.

The above Shinkenger figures have been released in Japan. You can buy a set on Ebay. They are called Gashapon figures.