UPDATED September 30, 2009 2pm EST
I thought I'd cover which are the colors used so far for auxiliary mecha (or in some cases, warriors) in Sentai. All of them have different shades in their subcategories as well. Many of the auxiliary mecha have debatable colors, is it cyan or aqua or green? I have had a long fascination with colors since I was a child, I had a Rainbow Brite birthday party when I was 5, the only 'girl' party my parents let me have. Power Ranger names are in italics. I guess this post isn't friendly to those who are color blind. 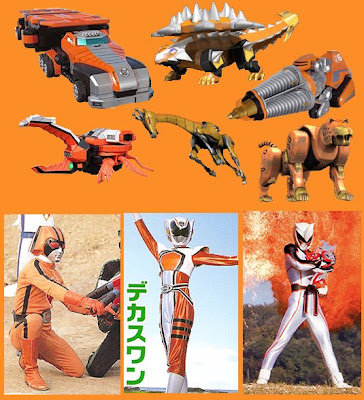 Orange
Gao Giraffe/Giraffe Zord was more like a carrot orange, Gao Jaguar of Gao God/(not given a name) is a pale light orange with tinges of amber color (Crayola's Atomic Tangerine). It is close to peach-orange or coral but it's not. Ankyloveilus/Ankylozord was a yellow-orange or Gamboge, GoGo Drill/Drill Driver was a plain orange, maybe like Home Depot orange, Carrigator/Croczord is a vivid strong shade of orange and Kabuto Origami of Shinkenger (2009) is almost like a orange-red-y color. There has been two heroes, with some orange in their outfit but not completely and they are DekaSwan/Kat Ranger (who had more orange, especially in arms and legs) and GekiChopper/Rhino Ranger (only had orange in trim). DekaSwan and GekiChopper were white, black, and orange. And the one that was completely orange was Battle Cossack from Battle Fever (1979), no other warrior has been completely orange since. 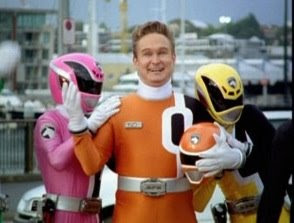 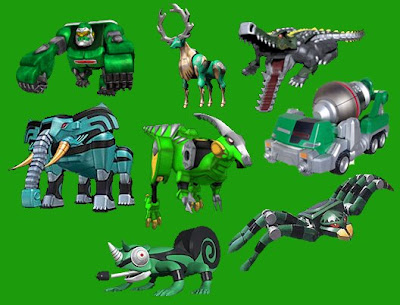 Different shades of Green
Gao Gorrilla/Green Gorilla was a regular green, Gao Ligator/Alligator was a dark green, but the toy was just a darker shade that Gorrilla. Gao Deer/Deer was a light paler green. Trance Spider/Spider Power Sphere was a basic green, the same shade as Shurikenger/Green Samuari Ranger. Parasarokkiru/Parazord was lime green. Rin Chameleon/Chameleon was a basic green. GoGoMixer/Cement Driver was like a JohnDeer Green. GekiElephant/Elephant sure does stand out with the other greens doesn't it? I really feel it is part of the teal/cyan ones but EVERYONE, many fans, say it is green. So I put it here to show it is not really that green. I believe it is a dark teal or dark Cerulean. 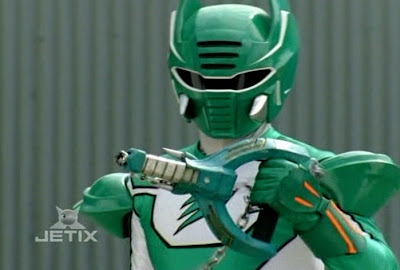 The Elephant Spirit Ranger from Jungle Fury is no where near the same shade of green as the GekiElephant/Elephant, it is closer to the shade of GoGoMixer/Cement Driver. 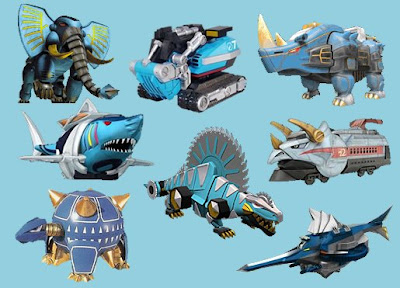 Periwinkle / Cyan / Teal
Gao Elephant/Elephant Zord, as I mentioned before was the first to be of this unique combination of the colors blue and green. This color is the most highly debated color, is it green or blue? Gao Elephant is teal or cerulean and Gao Rhino is Colombina Blue or a mix of maya blue with cerulean. Tortuise Hammer/Turtle Mace, one of the Karakuri Balls, was a Cornflower Blue. Dimenokodon/Dimetrozord was like a light teal, Go Go Shovel/Shovel Driver was cyan (brighter than periwinkle), Geki Shark/Shark Zord was aqua, K-Line/(not given a name in RPM) is light periwinkle, very pale, and Marlin Kaijiki (Shinkenger 2009) is a dark cyan, it is more blue than green. 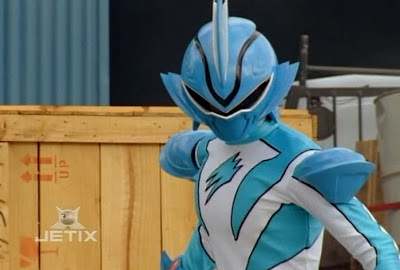 The Shark Spirit Ranger from Jungle Fury is around the same shade as the zord, maybe a little brighter. Many agree it is cyan. 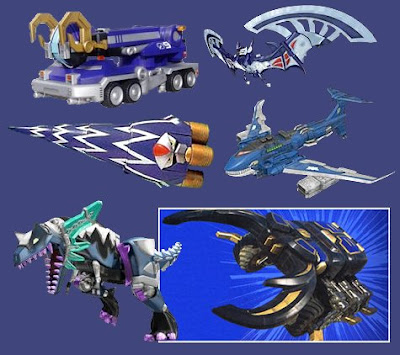 Indigo / Navy
Whatever people might call this color, purple or blue, it is a darker shade of blue. I would consider Squid Attacker/(no name given), GoGo Crane/Crane Driver, and GekiBat/Bat Zord indigo. Gorai Stag/Navy Beetlezord is of course Navy. Jumbo-whale/Whale Zord is Royal Blue, a light navy color if that makes sense. Carnoryutus (Abaranger 2003) is a interesting shade, like a pale Ultramarine and a bit grey-ier. 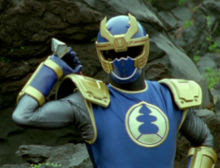 Kuwagata Raijer / Navy Thunder Ranger is the only warrior with a darker shade of blue than usual. 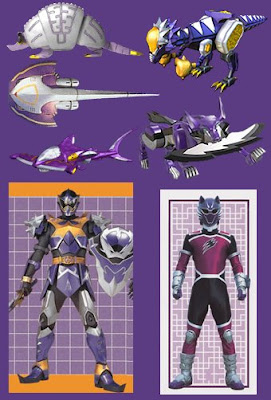 Purple / Violet
GaoHammer/Hammerhead Shark was the first purple anything in Sentai history, it was a vivid and perky shade of violet. GaoMajiro/Armadillo Zord was a lavender color, light violet. Kabuto Gani/Sting Blaster was a like a Royal Purple. Bakikeonagrus/Cephalazord is a mildly-dark violet with mixes of red or Electric Indigo. Geki Wolf/Wolf Zord was more of a purple than a violet. Violet is tangy, more pink-ish. GekiViolet/Wolf Ranger is that, he has different shades of purple. His suit a tangy violet like Gao Hamma, his boots and gloves are lavender like Gao Majiro, and helmet purple like the wolf zord. Wolzard/Wolf Knight was a purple like wolf zord. Wolkaizer is Wolzard, so I am not covering him. Update 3/11/10: Ika Origami of Shinkenger is white and lavender. 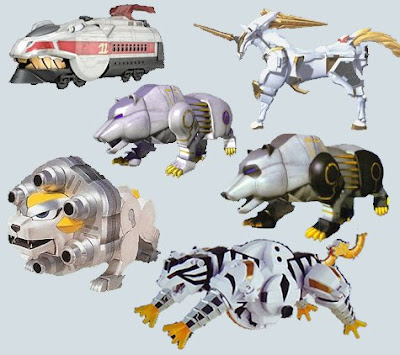 Non-Ranger White
These are auxilary zords that don't belong to White Rangers. Gao Polar/Polar Bear and Gao Panda were silverly-white. (Gao Panda only appeared as a toy and CD exclusive) Gattling Leo/Lion Laser was just plain white. Unikirion/Brightstar was plain white, maybe a bit pearl-y. T-Line/(not given a name in RPM) was like a silver-y or grey-ish white. Tora Origami is white and black. 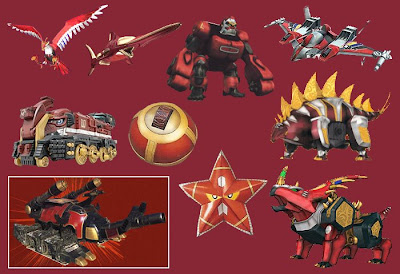 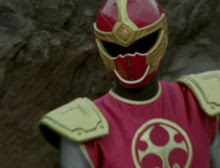 Kabuto Raijer / Crimson Thunder Ranger was a darker shade of red, and considered crimson in Power Rangers. Many fans clump him with Red Rangers and others consider him the closest thing to a male Pink Ranger.

Update 3/11/10: I will be posting a new post--update to this post with Shinkenger and Goseiger as soon as the Wind Brothers Set appears on the show and there is good enough pics. So sometime before May.
Related: Orange and Periwinkle... Pattern?
Posted by Lavender Ranger at 6:29 PM

Wow, I was thinking of something like this and voila you made this :D. And I've been wondering where did you put the gold, silver, and saidai-oh for example?

Anyway, I think this will be 'too much', but I think it's great if someone (you for example), put a database of zord where the user can put in their own search criteria, such as "Which ranger has the most mecha to pilot", or "Which color became head part the most", something more extensive than this post or this. The table would have columns like id, Sentai name, PR name, color, pilot, part when combined to the megazord, animal species (or vehicle type), etc. Dunno, just another thought.

I can answer which ranger has most mecha to pilot... the red ranger. Gao Red had 4, Hurricane Red had 5 Shinobi medals, Abared/Abaremax had 6, BoukenRed had 4 (at one point, he gave Drill to Yellow), the main 3 Gekiranger had 3 each, Go-Onger had 4, and ShinkenRed will have 3 and maybe more.

Awesome review!! I love it. Oh what about Jungle Fury Shark Ranger? Even he's not from Sentai he's the cyan ranger.

Yeah Ry, I forgot! I was gonna do it.