Many have noticed this or have complained, on the hot men in Super Sentai and Power Rangers. It is curious to me that people don't complain enough about the girls in short shorts. I have heard the complaint once or twice, but not as much about hot men. Anyway in Super Sentai and Kamen Rider, it has become a common occurrence to have good looking men or bishōnen (beautiful men). Producers have said they have good-looking men because of housewives who watch the shows with their children.

Above is Tetsuji Tamayama, who played Gao Silver. He had more fans that were mothers than anything. I remember a friend telling me she saw a crowd of women around him at a fan event. Who was also man candy was Yūjirō Shirakawa (Kabuto Raijer). Azusa Yamamoto (Furabijou) married him. Other Rangers after that, I believe weren't so striking, but more into the look of popular culture. Many of the men have an androgynous look, which many American fans either make fun for looking like women or...., no, that's it. Many male main characters in Super Sentai have taken off their shirt, sometimes just in process of the plot (few seconds) or gratuitously, but rarely just gratuitously. 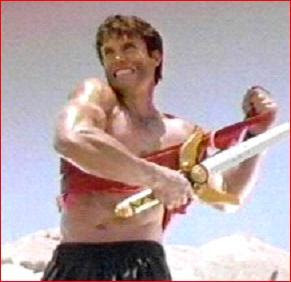 Danny Slavin (Leo) infamously took off his shirt in Power Rangers Lost Galaxy. Many fans found this gratuitous and ridiculous since he transformed after he ripped off his shirt. I personally like it and I am proud to say that. Roll your eyes if you want. Other male Rangers that have been shirtless include Jason (various episodes), Tommy (in "Gun Ho" and "White Light Part 1"), Cole, and recently Ziggy. 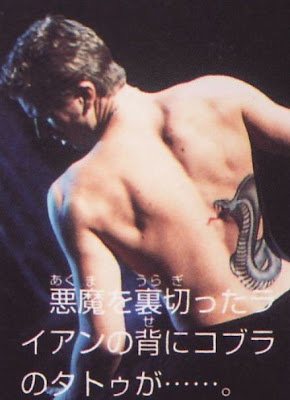 Many others rangers have been in tanktops but not completely bare. Except of course of the Titanium Ranger, Rhett Fisher as Ryan Mitchell on Lightspeed Rescue. Ryan got an evil tattoo on his back that was slowly moving and killing him and we could also see his chest. Most of the male Power Rangers have been handsome, most likely for teenage girls and housewives, but never has it been stated like it has been by Super Sentai producers that this is their intention. 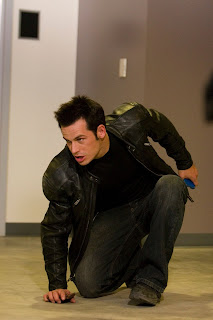 I think the most obvious intent to attract the female audience in American Tokusatsu would be in Kamen Rider Dragon Knight. The majority of the cast are steaming hot! Or maybe it wasn't intentional and the casting director has incredibly good taste. It may be no surprise that most of the actors have done daytime drams (soap operas), where attractiveness is one of the requirements. I just found whole topic interesting to mention.
Posted by Lavender Ranger at 10:04 PM

I'm a man...but I find Gunpei from Go-Onger pretty attractive. Maybe its just me....

I agree and thank you for being brave enough to be honest.

What about Cole in Power Rangers Wild Force getting topless?

Sean, I mentioned it.