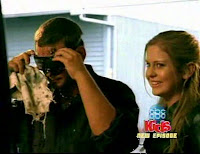 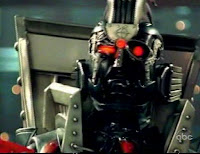 It is a hot day, a black robot general walks down the desert. Back in the dome, Flynn gets oil in the face when Dillon starts his jeep. He needs a lot to go on his jeep. Ziggy puts a chef hat on Dr. K's head and she takes it off and shreds it in a blender. Ziggy wants to teach her how to make a good breakfast, but she is not a great pupil. She asks where he learned how to cook and he says prison. She runs away. Gema comes in, beating out Gem and Scott. The black robot comes into the villain's lair. Tenaya has a new robot, full of straws. Kilobyte, Venjix's most feared general is the name of the black robot, he is feared by the others. He takes off his head and takes out dust and wants Tenaya to clean it up. She is insulted and wants to fights him but the others hold her back. Tenaya is commanded to go with her Chemical Bot to the city. 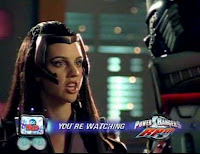 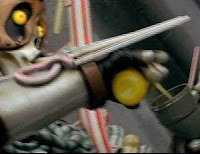 Tenaya is upset that Kilobyte called her sweetheart and blasts a Grinder. The Rangers arrive and fight the Grinders. The Rangers split and the five go after Chemical Bot. Tenaya takes on the twins. The three hold the robot down and the other two its down. He looses his red drink and freaks out. He dirnks the purple drink and sprays it on the Rangers. He disappears. Yellow grabs his red drink that he left behind. Tenaya returns to the base and Kilobyte scoffs at her. Chemical Banki pours a yellow drink in the tubes of the city and a yellow gas goes off. Two soldiers go by it and faint. Then all the men in the city fall asleep. 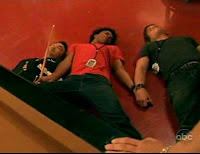 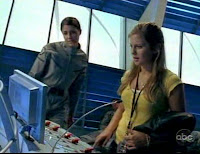 Summer does a cool move on the billard table when Gem, Scott, and Dillon have fall asleep. Flynn falls asleep. Dr. K says that the gas is specific chromosome, gender-specific. Vasquez tells them that the Colonel is asleep. Ziggy has not be knocked out... until now. Vasquez is worried. Summer tells Gema to work on the upgrades, Dr. K will work on a antidote and Summer will take care of Vasquez. Kilabyte criticizes Tenaya (she asks if because she looks female, that he thinks she is weak, he says it is because she is programmed to be a girl, that she is weak.) and is sexist and holds her up, until Venjix tells him to let her go. Summer gives Vasquez confidence. Meanwhile, Gema upgrades the Road Zord, but now it will only work with Scott's Engine Cell. Dr. K has an antidote and tries it on Ziggy. Ziggy wakes up and says he had a dream where he was with Dr. K. He falls asleep again and Summer arrives. 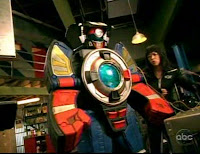 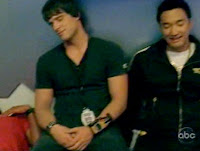 Tenaya, Chemical Bot and the Grinders come into the city as the guards are asleep. Summer and Gema use Dillon's car, saying it is an emergency. After the break, the girls arrive in Dillon's car. Summer asks Vasquez if she is ready, she says not yet. They fight the Grinders. Tenaya brings the girls down. They then morph--Silver and Yellow share a screen. Sorry, for those hoping for Silver to have the screen on her own. Yellow does an energy burst and takes down some Grinders. Dr. K continues working on the antidote. Tenaya pushes Chemical Bot into the fight and the two fight him. Vasquez initiates a thunder storm and takes out the Grinders. Tenaya attacks the duo. Vasquez creates a tornado, the girls grab on to 'something' and the twister takes in the bot and the grinders. 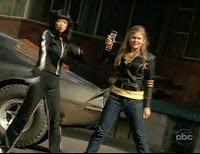 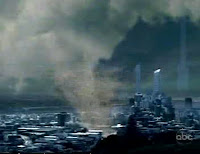 Tenaya holds on to dear life. Vasquez's base goes haywire and the climate control goes offline. The girls de-morph. Dr. K finally has the antidote and sprays it on the boys. She gives Scott the Road Attack Zord and the boys run off to battle. Tenaya is about to attack the girls when Kilobyte shoots Tenaya down, saying no one likes a cheap shot. Tenaya is clearly upset. The boys arrive, saying stay away from 'our' women and re-tract his statement. Scott and the Road Attack Zord fight the Chemical Bot on the other side of the city. The Rangers reunite. The bot is grown and the other zords except for Red's fight the bot. Because his energy is down. ValveMax and Mach Megazord are formed and take down the monster. Red cheers them on from below. 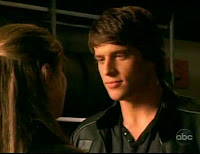 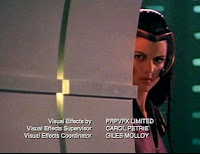 After the break, the twins and Ziggy pour the antidote in the fan. Ziggy wanted all the girls for himself to date. Dillon is upset that his car hood is gone, Summer and Gema bring it. Dillon is upset. Flynn is for painting it. Dillon doesn't want it like new, he wants it like he had it. Gema and Summer say he understands. Dillon tells her not to drive his car. She says not to fall asleep next time. Dillon asks how driving his car into a tornado a good thing. Scott and Flynn says it is good because at least their cars were not used. Tenaya overhears Kilobyte asking Venjix if she knows the truth about herself. He says she should never find out. Tenaya wants to show Kilobyte who is ruthless. 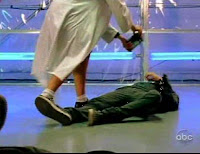 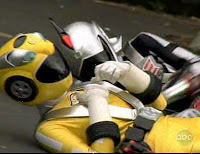 Review:
It is obvious they used the Straw Banki instead of the Shower Banki because of Shower Banki's obscene nipples. (Her faucet knobs were her nipples) Shower Banki's plot was used in this episode but they switched the bot. Actually, they combined two monster's plots together. Interesting. Also interesting that they brought in Krikezy early on, he is suppose to appear later on. He appeared in the Japanese magazine fans of PRRPM, so that will be interesting if there are some surprises coming up. It is interesting that there is a dynamic between Kilobyte and Tenaya. In the Go-Onger episode, Yellow and Silver initially succumbed to the pressure and were scared, but thank god our women are much braver. Yellow took lead fast. Vasquez sort of reflected the Japanese rangers. But the episode isn't as great as I thought it would be, I would have liked it if the girls would defeat the monster on their own.

Posted by Lavender Ranger at 5:23 AM