Why do Gay fans like Power Rangers/Tokusatsu (in General)? 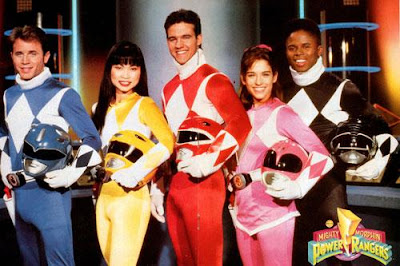 It might be a surprise to some people to find out there are many LGBT (Lesbian, Gay, Bisexual and Transgender) fans there are in the 'Power Rangers fandom.' I am a gay man and we are like anyone else. Singling out the LGBT community may not be a good thing to some people, but I thought it would interesting to highlight the positives that the LGBT fans see in Power Rangers and in Tokusatsu in general. I think the reason that attracts LGBT fans to Tokusatsu is the same thing that attracts LGBT people to superheroes. I feel that superheroes in general provide queer people (yes we use that term) with fantasy and an escape, like everybody else. But LGBT identify with keeping a deep dark secret, for example like how superheroes have secret identities in order to protect their love ones from their enemies, queer people keep their sexual orientation or gender transition a secret in order to avoid abandonment from their family or societal rejection.

The Super Sentai and Power Ranger heroes being in bright colorful uniforms is also another incentive to gay fans. (We like bright colors--the rainbow flag is a gay symbol because each color stood for something, but also its often misunderstood like us.) And what do the LGBT community that are not fans think about Power Rangers? Pretty much the same thing everybody else thinks, some don't know it is still around, some don't even know it is from Japan. So same as the mainstream culture. But the LGBT people I can get into Sentai, understand it and like it. Gay people are most attracted to camp. Camp and Gay go hand and hand, heighten drama is ideal. Camp is deliberately exaggerated and theatrical in style, typically for humorous. Many PR fans get insulted when told that Power Rangers is campy. Most people think of the 60's Batman as the number one example of Camp. But Camp comes in different levels. You got to admit that most of the monsters are campy in a way. And the majority of situations in the first few seasons of PR were slightly campy (turning to footballs, bricks and balls anyone?)

Here are a few of my favorite things: 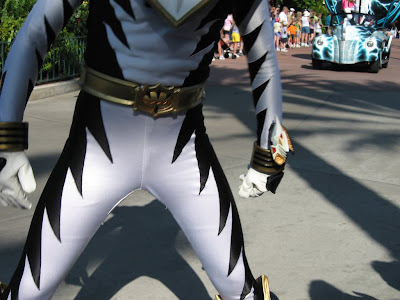 1. Tight Spandex
Let's be honest, come on, we have all thought of it. All superheroes have a tight suit, especially the major ones--Superman and Spider-Man, etc. 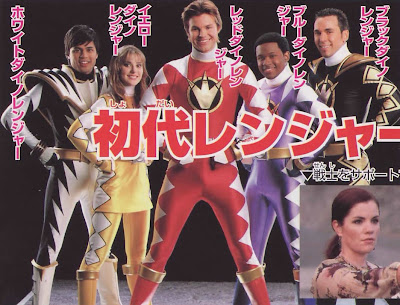 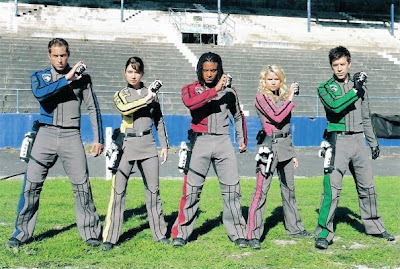 2. Attractive Cast
The girls and boys are both equally attractive in each cast. Not everyone in every cast, but eye candy is always appealing. 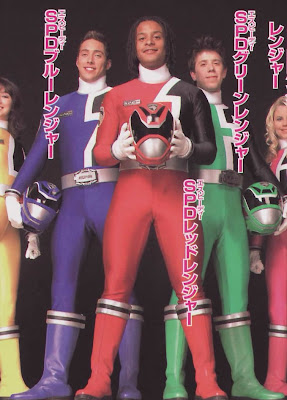 3. Cool and Interesting Designs
I think everyone likes the designs of zords, suits, monsters and such, but it also attracts LGBT fans. Yes, it is a stereotype that gay people like fashion, but eh, what can I say? The monsters bring a certain heighten sense of camp that is both self-aware and an inside joke. The puns in Super Sentai are not done to be cool but have a keen sense of irony and innuendo.

4. Changing and Secret Identities
As I mention before, LGBT fans can identify with having a secret identity. Also 'changing' is a interesting factor. Transgender people are transitioning from one gender to another. The Power Rangers 'morph.'

Posted by Lavender Ranger at 8:52 PM

Hey Hello!, I just found your blog and I think is really cool!
I liked the way you put this topic to discussion, I have wondered that myself. But at the same time a friend of mine said "they are guys in thights" when I found out he like tokusatsu... Funny how life turns out, rigth!?

Well I am also a gay male that likes power rangers but not for any of the reasons you mentioned. It's just because I never grew out of liking it as a kid, you know the whole save the earth thing. No offense, but this article seems to be stereotype gay people. I am not at all into fashion or camp nor am I attracted to bright colors. I just like Power Rangers for the same reason I did when I was younger.

That's great that you don't like fashion or camp, that's your thing and that's awesome. Gay people come in all shapes and sizes. These just happen to be my favorite things.

I am also a gay guy who loves Power Rangers. I grew up watching it and (as cable guy as it sounds) it shaped a lot of my values. I still collect the toys (megazords mostly).

I also am not into fashion. Even though I do like the design of the zords and get excited for new ones. I do like camp. But, mostly I like superheroes, and Power Rangers (in my opinion) are the best superheroes.