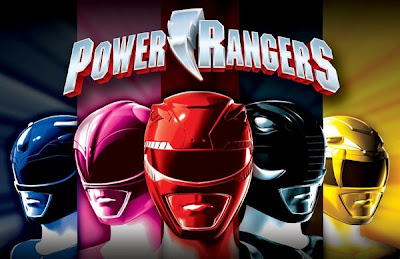 Read each article, each has different info!
Variety Article posted today May 12, 2010 at 5PM EST
NY TIMES ARTICLE
LATimes Articles
Canoe -- Jam! Television
Associated Press
The Hollywood Reporter
Entertainment Weekly
Deal Book
Newsweek
Nice And More Press Release
It has been six months, actually I had heard rumblings for a long while that Saban might take the rights back from Disney but I couldn't say anything until it was official. Haim Saban has a new company called Saban Brands and has made a deal with Nickelodeon to have 20 new episodes of Power Rangers, including the 700 older episodes (MMPR-RPM) will air on Nicktoons. The Variety article had some information wrong, saying that Mighty Morphin Power Rangers was the show title for two seasons when in fact it was 3 and saying Disney is currently running PR on ABC Family when in fact it is ABC Kids on ABC. "Disney has maintained some "Power Rangers" merchandise licensing. But the property clearly hasn't been a priority for the Mouse." Which is true.

The New York Times Article says: “The list is very, very long for things we’re going to do” with the “Power Rangers,” Mr. Saban said. An 18th season is in development now. That season will make its debut on Nickelodeon in the first quarter of 2011, the channel said. Mr. Saban said he felt that Disney “did not develop the property and exploit it in the way that it deserves.” And might I add that now that Disney has Marvel and Iron Man in Disney Stores, they want to focus on boys. But, they had PR but because it didn't have the Disney name, it became a black sheep. They just didn't know what to do with it. The Associated Press Article got this candid quote from a Disney Spokesperson: "From our perspective, it just doesn't fit in our long-term programming strategy," said Disney spokesman Jonathan Friedland. The Power Rangers are expected to disappear from Disney and ABC lineups "immediately," Friedland said. While Nickelodeon's current President says: "This fits in nicely as we are doing more things specifically for boys, and we are excited to add proven properties to our original slate," said Nickelodeon President Cyma Zarghami.

Look at a poll I did last summer: 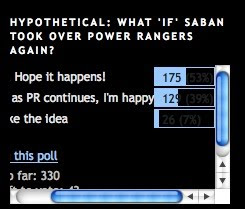 So a resounding 53% would think it would be awesome if Haim Saban took over the franchise. I have to hurry up and get a subscription to Nicktoons channel!

Some fans on Rangerboard already are jumping the board and thinking of a 'reimagining' movie. The Canoe article says: "A new movie, video games and toys are also in the works." And the Associated Press article says: "There are also plans to bring a Power Rangers movie back to theaters for the first time in more than a decade." Would You Pay for a ticket for a Mighty Morphin Power Rangers 'Reimagining' Movie?
Which means, would you buy a ticket to go to the theaters and watch a movie in which they re-do completely the first season of MMPR.
88 out of 111, 79% voted YES
23 (20%) voted No.

ATTENTION
Let me clarify, the 20 'new' episodes will be from a new Sentai series. They haven't stated which one or the name of it yet. I am sure they will soon. Most likely the new series will air on Nickelodeon.

The Canoe article says: "New episodes kicking off the 18th season of the show will play on Viacom-owned cable channels Nickelodeon and Nicktoons next spring. A new movie, video games and toys are also in the works."

The Hollywood Reporter says, "Library episodes of the show will start airing on Nicktoons later this year, with 20 new episodes set for Nickelodeon and Nicktoons in 2011 under the direction of original executive producer Jonathan Tzachor."

The Hollywood Reporter also reports, The Power Rangers are expected to disappear from Disney and ABC lineups "immediately," Friedland said. I heard a rumor that the MMPR reversion was the straw that broke the camel's back and Saban didn't like it. So most likely we will be seeing the original MMPR on Nicktoons, not the 'reversion.' And if Jonathan Friedland says PR will be removed from the ABC lineup 'immediately' that means we have seen the last of the reversions.

Produced by SCG Power Rangers LLC, Power Rangers will commence production in summer 2010 with original Executive Producer Jonathan Tzachor back at the helm and a new cast, look and theme for the show. -Nice And More Press Release

What 'new episodes' is Saban talking about? There are no new episodes, period. Unless if they somehow filmed new footage and made the transition for Shinkenger, it's probably old seasons with digitally enhanced graphics.

The 18th season is in production, meaning they might adapt shinkenger or goseiger. Most likely Shinkenger. They aren't doing enhanced graphics, that was Disney, Saban hated it. They said Nick ordered 20, that means if it does good, they will order more.

I always thought that someone would make a Power Rangers movie, like a restart for the franchise, leading up to a new season. But if we're getting an actual 18th season AND by Saban, I'm sold. This made my year.

ahh need 2 get nicktoons. i hope its shinkenger

I hope when they start reshowing MMPR on Nicktoons, they go back to the official and classic MMPR that I grew up on.. none of this altered 'comic book style/heavy editing' crap that is showing now!

This is pretty great. Nickelodeon is doing some pretty great things with their programming. I think Disney is going to regret the day they gave up on Power Rangers.

You think they will stop the new power ranger team concept? It would be great if they went back to the first 3 or 4 seasons when they evolved the powers and continued a broad story line.

This is awesome, I think I speak for everyone when I say that this is what we all have been waiting for, I just hope that they continue the MMPR toyline as well as the new toyline, we still need a new Dragonzord and Rita

I can confirm that Disney XD UK will no longer show Power Rangers after tomorrow. They'd been airing RPM reruns. Found the schedule for Saturday here: http://uk-tv-guide.com/list/Disney+XD/15%20May%202010/

Holy. Freakin. Crap.
That is the best news I've had this year!