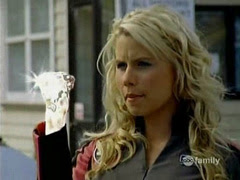 Non-Morphed Powers
Disney had a ongoing thread in most of their seasons where when the Rangers were not morphed, had individual super powers. Fans did not like this and some believed this was redundant as many had martial arts skills and going against the lore of the Power Rangers. I didn't mind it at times. Ninja Storm, Mystic Force and Jungle Fury already had powers in their original Sentai related to elements or animals, so there wasn't much difference in PR. As for RPM, they had individual powers but only when they were morphed, so doesn't count. The seasons that added un-morphed powers were Dino Thunder, SPD, and Operation Overdrive.

Rita as the Mystic Mother
Since Soga Machiko played Bandora and Magiel in Zyuranger and Magiranger, respectively and that footage was used for Power Rangers and had recently died, Mystic Force writers decided to make Rita Repulsa into Mystic Mother. Because of course the Mystic Mother obviously looked like Rita and was played by the same actress.

Thrax, son of Zedd and Rita
Thrax was added to the Power Ranger lore for the 15th anniversary episode in Operation Overdrive. Reportedly he was their son and was angry they went to the good side, but there was no explanation as to when he was born or how exactly. Thrax's body looked much like his father's, had half-human face with bone exo-skeleton like his Uncle Rito. He also had his father's staff and was trapped into Rita's dumpster by Sentinel Knight.

First Female Red Ranger
Power Rangers claimed the first female red warrior in 2005 while Super Sentai did it in 2009 with Shinkenger. While neither had completely original outfits, Charlie the A-Squad SPD Red Ranger had a semi-original uniform made from motocross gear. Charlie was leader of a group that was highly touted by SPD by being the best and decided to align themselves with evil by their own free will, not by a spell.

Posted by Lavender Ranger at 1:56 PM

Non-morphed powers really annoyed me, they were rarely ever used as well so why were they shoehorned?
A few of them worked like Mystic Force since it was just magic they used and SPD worked since the powers were directly related to the storyline and why they were rangers. Others like Operation Overdrives and JF just seemed tacked on.

Rita as Mystic Mother is hated by some but I thought it was an awesome idea/tribute and gives the character better closure than C2D did.

Thrax was a neat idea, he wasn't very interesting sadly but him being the son of Rita/Zedd gave him enough cool factor.

I loved Charlie, wish we had seen more of A-Squad, and when has it ever been said she's hispanic? I do hope Shinkenger is adapted so we can get another female red even if just for a few episodes.