Bulk & Skull
Unlike Zyuranger of Super Sentai, the source footage of the first season of MMPR, MMPR had Bulk and Skull, two characters who don't know the Rangers' true identities and serve as comic relief. In the early seasons, not many of the Rangers served as comic relief. Arguably, they did grow from being just punks and wannabe thugs. Bulk & Skull sought the Rangers' identities and when they founded it out, they saved them and lost their memories. In PRiS, they learned them again (new team) and stood up to evil again. Skull didn't appear in the pilot, only Bulk did, unnamed and not part of the main cast yet.

Profesor Phenomenus
This scientist was introduced in season 6 'In Space,' and when Skull's actor Jason Narvy left in the first episode of season 7 and Bulk left in season 7, along with Phenomenus. Phenomenus served as their boss and comic relief as well. The next season absent of Bulk & Skull, they were not replaced and Joel the Green Ranger served as the comic relief. For Time Force, there was Circuit and Trip sometimes. Wild Force had Max and Danny, Blue and Black Rangers and sometimes even Cole the Red Ranger, so there were no Bulk & Skull-like characters.

Cassidy and Devon
Cassidy and Devon were obvious as Bulk and Skull antagonists even though they did not look or act like them. Cassidy is shallow, self-absorbed, and oblivious, she was antagonistic to the Dino Thunder Rangers. She did date Ethan and grow as a character, she found out the Rangers' identities and decided to keep it a secret. Devon was her conscience and they eventually ended up together.

Piggy and Boom
Even though they were not a duo, they served as comic relief in different spots. Boom was inside SPD headquarters and Piggy outside. Boom was a wannabe Ranger and Piggy was the informant that betrays them and then redeems himself. I think it was an error to have two castmembers that were not Rangers because the crew didn't have enough budget for the sixth Ranger, what with Doggie and Kat and so many Rangers ended up in SPD.

Toby and Phineas
As I have mentioned before, the actors who played Piggy and Boom came back for Mystic Force but flipped over. Barnie Duncan had makeup to be Piggy, but now was without it. Kelson Henderson put on the makeup as Phineas. They served as comic relief in different ways, Phineas became central to the plot as he took Nick/Bowen to the human world. Toby did solve the puzzle of the Dragon Heart.

Norg
Norg served as his own comic relief, by himself, played Kelson Henderson. 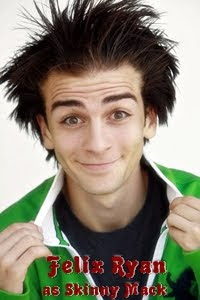