My pal Sean Akizuki covered this topic but I felt like elaborating. It was the 'Versus' part of the Teamup specials, for example, Kakuranger vs. Ohranger. I am going to detail if they fought or not. But the definition of the word 'versus' is just opposed to or in contrast with, which they do often.

JAKQ vs. Goranger
The first teamup ever, the Kamen Riders and Kikaider are mentioned in this special. Like the ones that followed it, it dealt mostly with the team that was mentioned first, in this case JAKQ. They worked together, didn't really fight each other. 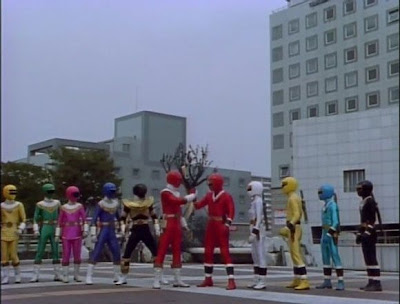 Ohranger Vs. Kakuranger
A Youkai is wreaking havoc and raping girls. The father and son of Baranoia Empire are having a competition. Some of the Ohranger get possessed. The two teams knew of each other and worked together. Like every teamup form this point, there is a monster of the Baranoia and a monster of the Youkai.

Carranger VS. Ohranger
Because of a misunderstanding, Oh Red and Red Racer briefly fight and later on the Ohranger's commanding chief had the Carranger go through a rigorous government training. Here there is a monster and robot from Carranger villains Bowsock and a robot from the Baranoia. 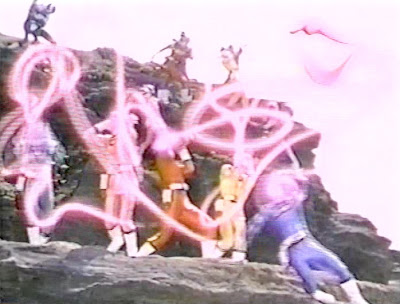 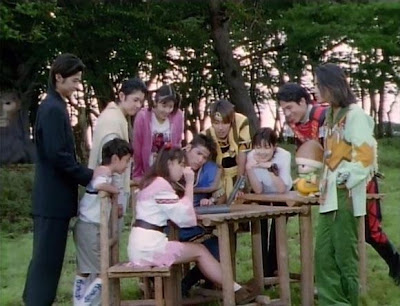 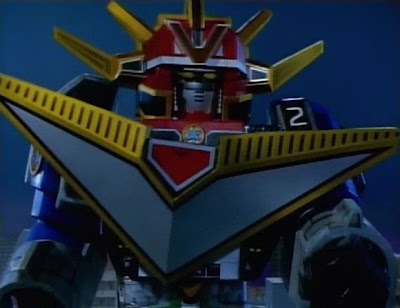 GoGoV VS. Gingaman
I haven't seen it, but I think they worked together since the beginning of the teamup. They even give the Victory mars the Lights of Ginga. The special only had a lost brother of the demons, who had betrayed his mother. 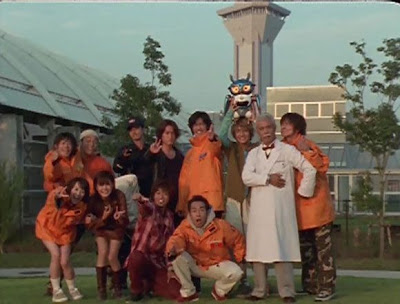 Timeranger VS. GoGoV
Tatsuya did know who GoGoV was and the Timeranger didn't know who they were, which made more sense than the SPD or Time Force knowing who the heck one singular Power Ranger group was. A thousand years in the future, and you think they will know about just one Sentai team? Us Sentai fans even forget Denjiman or Changeman for example. Anyhoo, they are all split into different times and learn to work together. There is an alien from the prison and Pierre form GoGoV and they merge together. 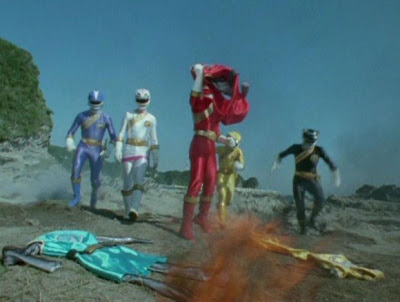 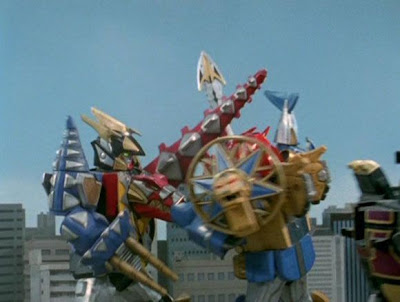 Abaranger vs. Hurricanger
The special starts out with the Hurricanger mecha ripping through the Bakuryuu, it seems the bad guy stole them. The Abaranger and Hurricanger eventually work together and defeat the ninja villain. Abare Killer was against them at that point. Shurikenger briefly appeared and helped out, with no explanation to why he was alive, but it could be thought it was his temporary ghost. 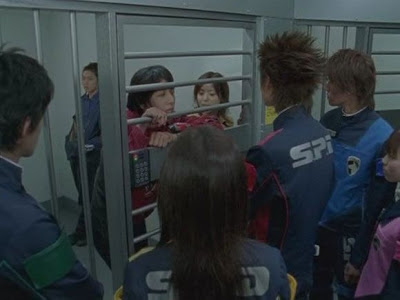 Dekaranger vs. Abaranger
The special starts out with the main three Abaranger have stole the Dekranger's cars and the Dekranger and Abaranger fight. They put them in jail and they work it out. Abare Killer was brought to life from death to help out but when back to the after life. There was an Alienizer and a Torinoid. 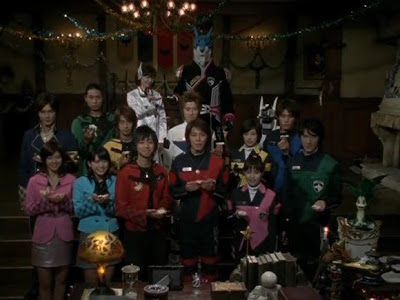 Magiranger vs. Dekaranger
It was the interesting that the villain Babon absorbed bullets which the Dekaranger tried but only magic could stop him. There was also Beastman Apollos. They learned how to work together. Also, Ban showed off his new Battlizer from his Fire Squad. The Battlizer was introduced in SPD. DekaBreak and MagiShine do a joint attack. Deka Master and Wolzard fight against each other. This took place before they found out MagiMother was not dead, I wish she did appear. In a flashback, we see the mother entrusted SwanSwan and Doggy with an important item.

Gekiranger vs. Boukenger
Pink and Red had been away in space and seemingly join Rio and Mele to get an ancient monster out. They get help from a Hippo Rinshi as well. The Boukenger, lead by Masumi clash with the Gekiranger but they quickly team up. In the end, Gekiranger, Boukenger, Rio and Mele fight against the villain in space. 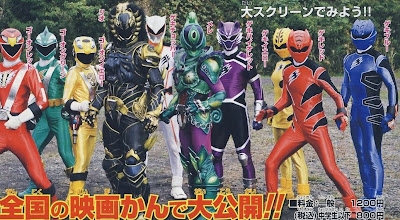 Go-Onger vs. Gekiranger
The Go-Onger must learn the GekiWaza to defeat a Rinshi, a Bankijyu and Ron (Long). Mele and Rio are brought to life by Hiroto, Miu and Master Shafu. Geki Violet and Geki Chopper did fight the Go-Onger over a misunderstanding. 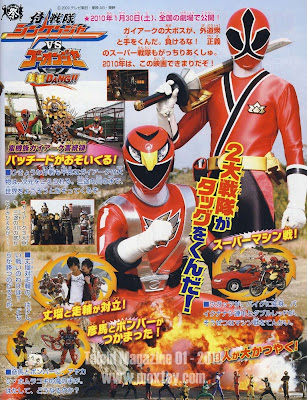 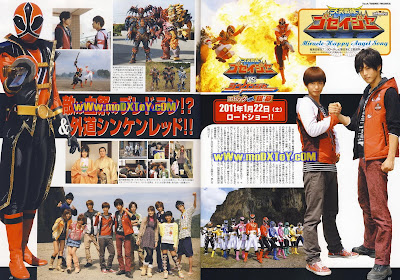 "Teamup Hair"
I forgot to mention this but I did want to mention this, the fan term that is 'Teamup Hair.' It probably used primarily by American Super Sentai fans. I am not sure if Japanese fans use this term. "Teamup Hair" refers to the different hairstyles that former Sentai cast members wear, that are drastically different than the hair they sported in their Sentai series. Many times they had to color their hair for a part and then changed it back to their regular hair or changed their hair for a specific part. The girls often cut their cut or rarely have it grow out. The men have them in different colors or states and have mostly grown it out or rarely cut it. So now this term "Teamup Hair" is often used by fans, especially now that former cast members are showing up for Goukaiger.

Actually Ultraman wasn't mentioned in Goranger vs JAKQ, it was Kikaider.

Goseiger vs Shinkenger is out on January 22nd, not January 1st.

I love this artcle.

how about an article about a what-if scenario should every sentai has a teamup special starting from battle fever j vs denjiman all the way up to dairanger vs kakuranger.. for example in goggle v vs dynaman, there is a funnu moment when ryuu hoshikawa/dyna black and kanpei kuroda/goggle black met each other and are surprised to see that they are identical to each other, due to the fact that they are played by the same actor..
then there is also this turboranger vs super sentai special which is an anniversary special featuring the turborangers teaming up with the 10 previous teams. is most likely to take place after the finale of turboranger,and the fiveman team are more likely to make a cameo appearance.. in zyuranger vs dairanger, the zyurangers have found a way to revive burai, and then the complete rosters of the zyurangers with burai and the dairangers with kou all joined forces