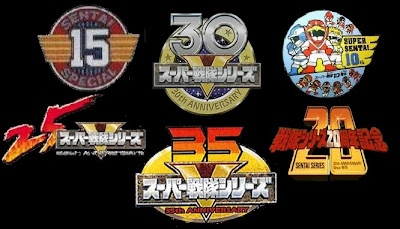 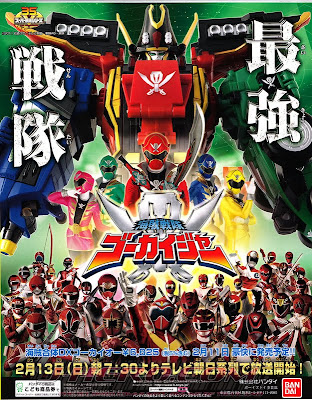 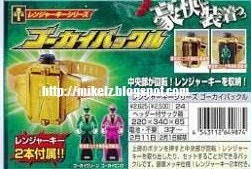 Go-kaiBuckle
Can store one ranger key in the belt buckle (in essence, similar to Shinkenger's belt buckles). Comes with Go-kaiGreen and Go-kaiPink's Ranger Keys. 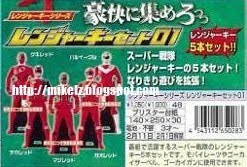 Ranger Key Set 01
GekiRed, DekaRed, MagiRed, GaoRed, VulEagle
Most likely we will be getting 7 sets for the 34 Red Rangers. Or maybe 6, with some sets carrying 6 instead of 5. 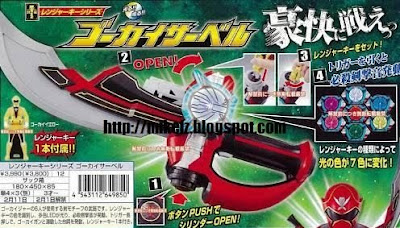 Go-kaiGun
Releases: February
The Go-kaigers' gun sidearm. When pushes the trigger, an upper part of the gun appears for key insertion. The Keys seem to be used to activate a finishing move. Comes with Go-kaiBlue's Ranger Key. 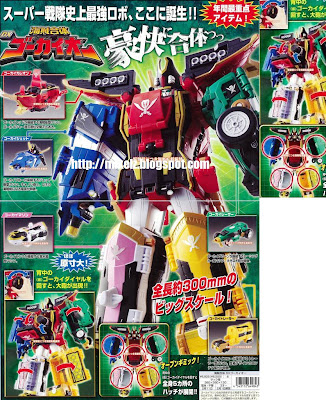 Go-kaiOh
Releases: 2/11/11 | Price: 6,500 yen
Go-kaiOh can enter a finishing mode, where cannons protrude from the different "caps". Galleon's bow opens up completely, with the 3-sails becoming armor. The barrels and treasure chests open up to reveal their cannons.

Go-kai Galleon- Red's 3-sailed galleon. Adhered to the bow are two sabers. Also, there are Boosters at the back. Go-kaiGalleon forms the head and body of Goukai Oh.

Go-kai Jet - Blue's jet. Where Go-kaiOh's hand is, there is a round barrel. GoukaiOh's hat is tucked behind the wings. Forms GoukaiOh's right arm and hat.

Go-kai Racer - Green's racecar. A square barrel is on the fist, versus Blue's round one. This is the car's bumper.

Go-kai Marine - Pink's submarine is white with pink accents). The tip of the submarine forms an ankle, but the upper part of the back is the knee. The location for its "cap" is a treasure chest.

Go-kai Trailer - Yellow's tractor trailer, which is mainly the cab part. It looks the most like a treasure chest. 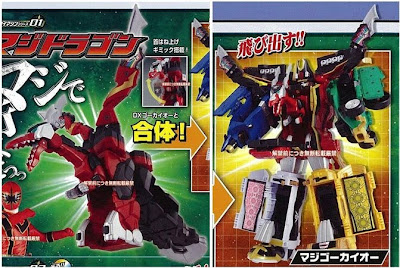 Go-kaiMachine Series 01 MagiDragon
Releases: February
Price: 2,500 yen
Combines with Go-kaiOh to form MagiGo-kaiOh, in which the cannons are removed from the cap-ports, and MagiDragon is installed, adding a dragon head to Go-kaiOh's chest, wings to the shoulders and dragon-claws to the feet. It is a red version of MagiDragon as the original one was made of the other Magirangers other than Red.

The silhouetted human-type robo combo seems to be a Shinkenger mode. GaoLion's head is on the chest, and the helmet has two-points, similar to ShinkenOh. The open Vulcan ports have the Shinkenger kanji on them, two "Ka" on the chest, "Sui" and "Ki" on both shoulders, and "Ten" and "Do" on the legs. The form itself resembles SamuraiHaOh, at least in silhouette.
Legend role playing set

Vinyl figures of past Red Warriors 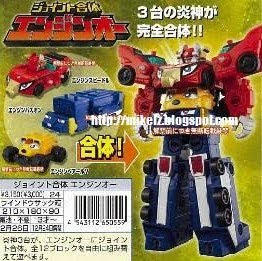 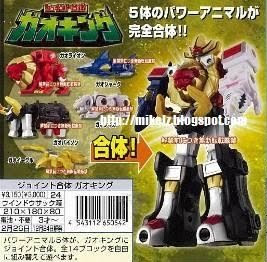 Lavender Ranger's Opinion
So are we to understand we will get all 200 Ranger Keys? I don't believe so. Maybe we won't even see 200 Ranger Keys in the actual Sentai series. So far there is 12 Ranger Keys to be released. Most likely we will be getting all 34 Red Ranger Keys. So far there is 7 Red Ranger Keys, we just need 17 more. I just can't help buy mention Power Rangers, I know the series Goukaiger hasn't premiered yet, but it is kind of hard not to mention the Power Rangers since this series has a lot of past Sentai, that had been in Power Rangers. It is inevitable. It is obvious that Bandai kept in mind that the series will become Power Rangers, because many of the past Sentai first released with this line have become PR, only 1 has not--Sun Vulcan. Bandai America can easily skip that, since recently they have been making their own version of the Morphers, Zords and other role-play toys. And if Bandai does use older Sentai, these will be omitted.
Posted by Lavender Ranger at 3:02 PM

Well the new rangers certainly look BA... but that's just it. They don't look like they'd be the good guys.

Luca, BA as in bandai America?

Kamen Rider Decade concept again? If these rangers are so called "bad Guys"

Yes I mean badass. I just didn't want to actually say the word ass in case some kids were reading this.

Also, it's weird how they look like European pirates. I understand that's what most people think of then they think of pirates, but it's a Japanese show. I wonder if this means that it's possible for there to one day be a freemason sentai! *fingers crossed*

Luca, that is true that they don't look like Japanese pirates, I guess they were more inspired by movies about European pirates.