Mr. Yellow and James Spiring helped me out MMPR to Wild Force of Power Rangers were dubbed in Korean. Then around 2005 or so, Abaranger to Go-Onger were dubbed under the Power Rangers title. Hurricanger was skipped, according to Mr. Yellow, probably because it was deemed 'too Japanese' and Koreans have problems with Japanese so maybe Shinkenger will be skipped as well. 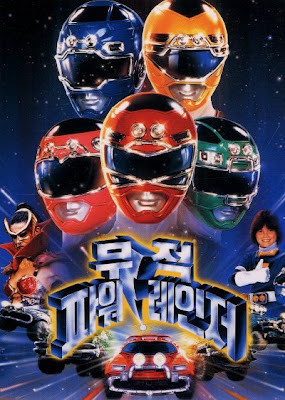 They aired MMPR to Wild Force dubbed in Korean and then Abaranger to Go-Onger dubbed under the Power Ranger title, and now Gaoranger after Go-Onger. 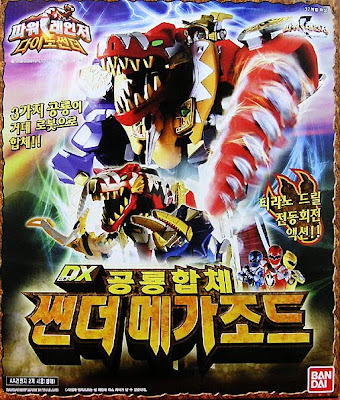 Abaranger logo in Korea was a carbon-copy of the American Power Rangers Dino Thunder logo but the zords came in boxed like the Bandai Japan ones (like most of the Korea stuff). 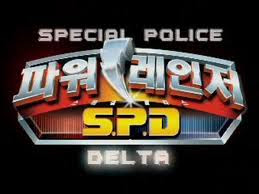 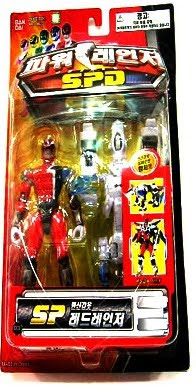 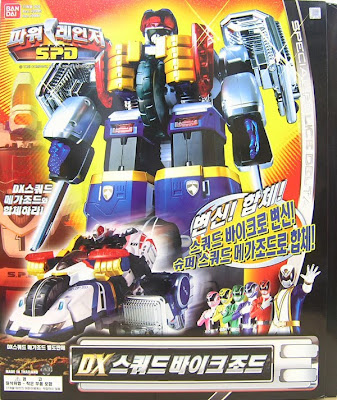 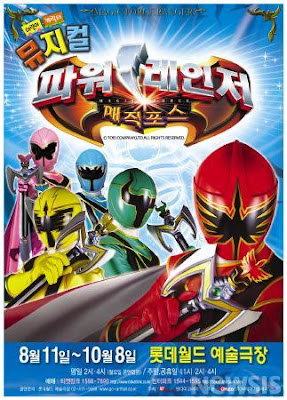 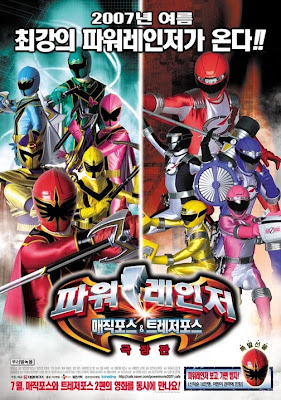 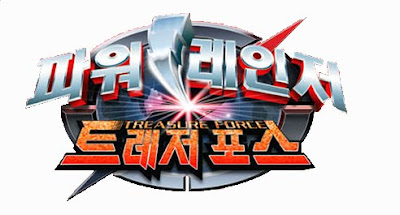 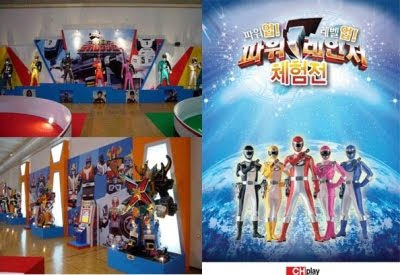 In Korea, they had a Super Sentai-esque roadshow. 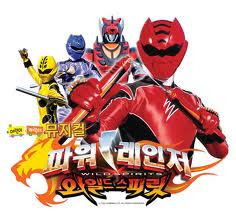 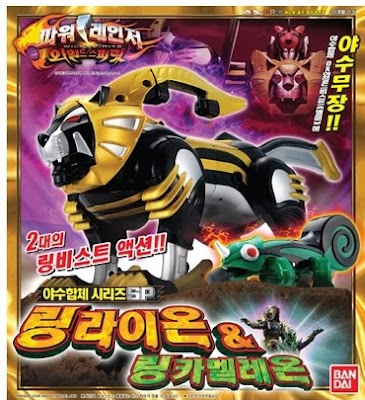 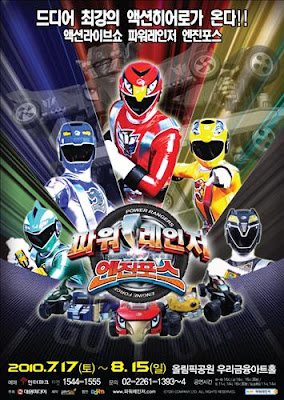 Go-Onger was released as Power Rangers Engine Force with the Go-Onger logo. 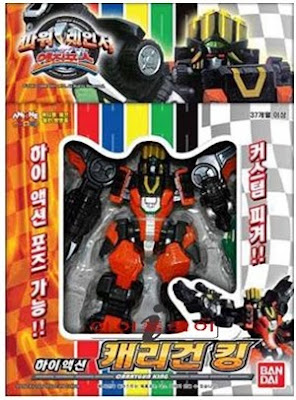 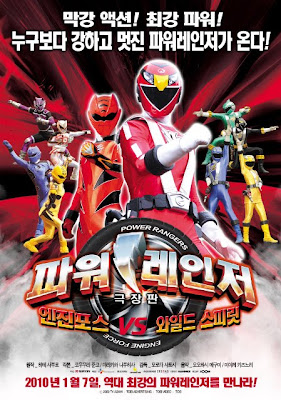 Just like in Japan, the Go-Onger vs. Gekiranger movie was released but as Power Rangers. 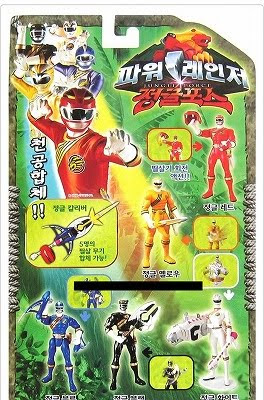 Okay, here is the main focal point of this post. Here we got Power Rangers Wild Force, renamed Jungle Force. But the toyline is a combination of the Bandai America Power Rangers toyline and the Bandai Japan Super Sentai toyline. Bandai Korea used a different background than Bandai America did, the logo is reminiscent of the Wild Force logo but with the Lion zord more prominent. Notice how the Yellow Ranger above is male because they are showing Gaoranger and in Gaoranger, the yellow ranger is male. 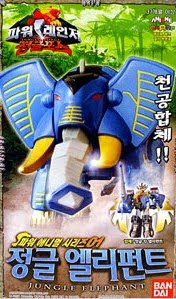 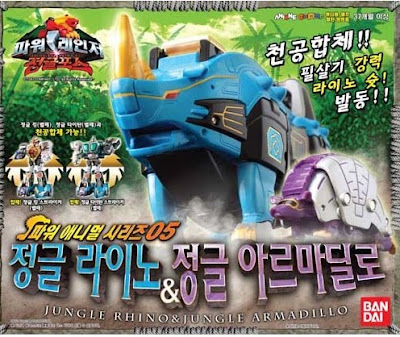 The Jungle Force (Wild Force) Pictures comes from this site. 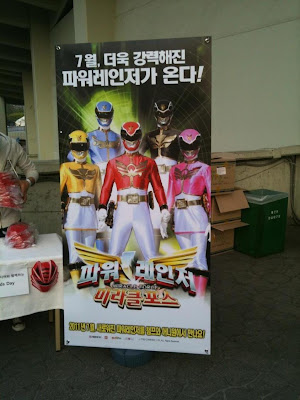 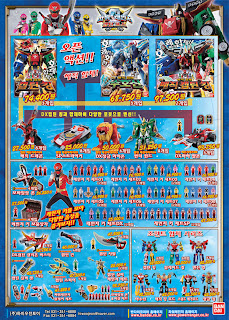 Power Rangers Captain Force (2012)
For some odd reason, Gokaiger was called 'Captain Force' instead of Pirates. Maybe because they think the idea of Pirates is too barbaric for children.One thing is the name and the other is the visual. Shinkenger was shown in the series but given another name, Power Rangers Blade Force.
Posted by Lavender Ranger at 9:09 PM

Not sure when PR started being dubbed in Korea, but I know they skipped Hurricanger because of the strained relationship between Japan and Korea. Hurricanger evidently was too Japanese, and the same with Shinkenger. And generally the series start in the fall of the next year in Korea. :)

I'm not sure if this is part of this topic, but Korea did get Choushinsei Flashman as it's very first Super Sentai series ever. It's name was changed to "Earth Protector Flashman." ;)

List of the Korean dubs:
MMPR to Wild Force dubbed from American to Korean;
then they skip to Abaranger, which becomes Power Rangers Dino Thunder.
Then Power Rangers SPD. They really should've changed the Dekaranger text to say Power Rangers in the section after the cast credits in the title sequence.
After that is Magic Force (not Mystic Force) - Magiranger dub.
Then Treasure Force - Boukenger dub (it's not Overdrive that got renamed!)
Then Wild Spirit, a dub of Gekiranger.
Engine Force, a dubbed version of Go-onger.
And the current series, Jungle Force, a Gaoranger dub (even though they already had the adaptation...) We don't know yet if they'll do Hurricanger, Shinkenger or Goseiger next year (they dub Naruto apparently, so whatever stopped them doing Hurricanger at the time is seemingly no longer an issue). Korea hasn't yet had Hurricanger or Ninja Storm, nor Shinkenger.

James Spiring, I understood that they aired the sentai, but I meant the PR title changed, but anyway, I clarified it now for other readers.