Going over the female Rangers by colors, if they had skirts and what about their costumes were different. I left pink for last because it is the color most used for females and exclusively so. 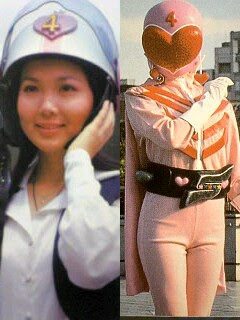 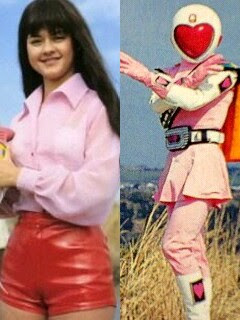 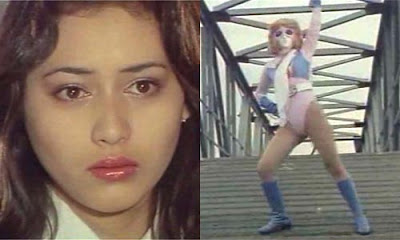 Miss America (1979)
The majority of her costume was pink, so I will count her. She had no skirt. 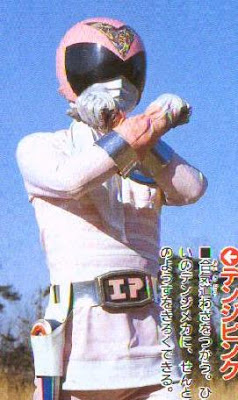 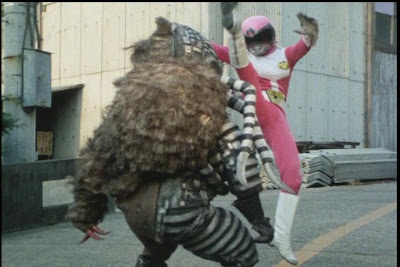 Goggle Pink (1981)
No skirt, just like her male counterparts. 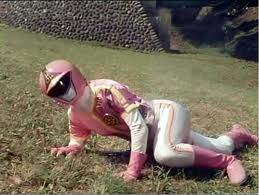 Dyna Pink (1983)
No skirt, white legs with stripe, same as the males. The year before Sun Vulcan, skipped girls and pink all together. 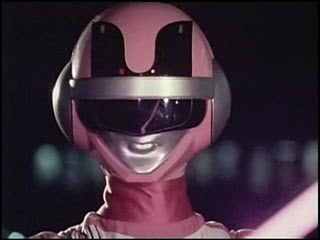 Pink Five (Bioman, 1984)
She was the first pink Ranger to have a female partner. Like her, she had an underwear-like like shape unlike the male rangers that had a short-shape, but no skirt to speak of. 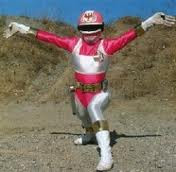 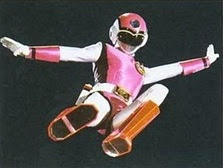 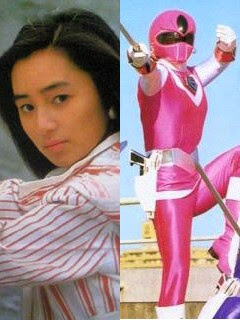 Mask Pink (1987)
She had white trim on her skirt like Yellow. 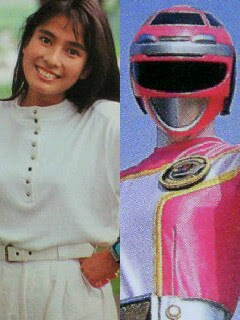 Turbo Pink (1989)
The year before, there was a female blue. She had a gold trim on her skirt. 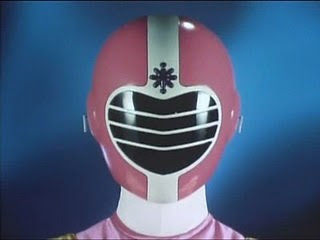 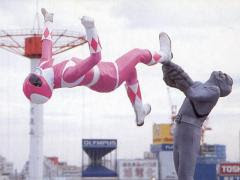 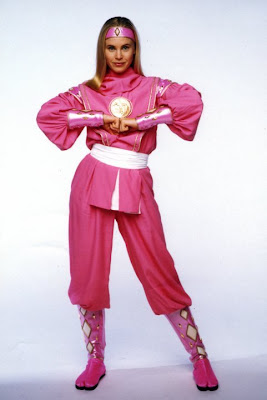 Pink Ninja Ranger (1995)
For the movie and 3rd season, the Pink Ranger and Yellow had skirt sheets with white underneath in this PR-exclusive costume.

Houhouranger (1993)
She had a white skirt with silt and gold trim, with pink legs. For those who don't know, her show Dairanger, their zords were used for the Thunderzords of Season 2 and their suits were not used for PR. 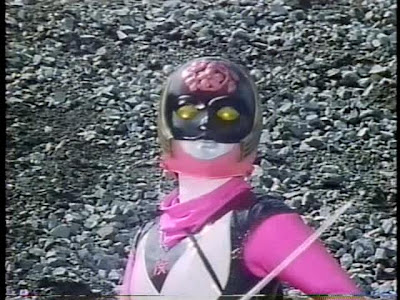 Sakura (Kakuranger, 1994)
I don't usually mention the flower ninja much in my list of Rangers because I do not consider her or the Hana Rangers as part of the other good sentai. It is like counting the Nejiranger/Psycho Rangers. They go with the evil Sentai. She had no skirt, she was the closest thing to have a Pink ranger in Kakuranger. 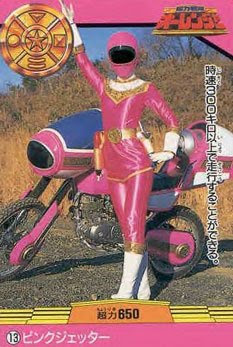 Oh Pink (1995) / Zeo Ranger I Pink (1996)
In Ohranger, she and Yellow had a skirt with gold trim, same color throughout. The team before Kakuranger had white instead Pink. 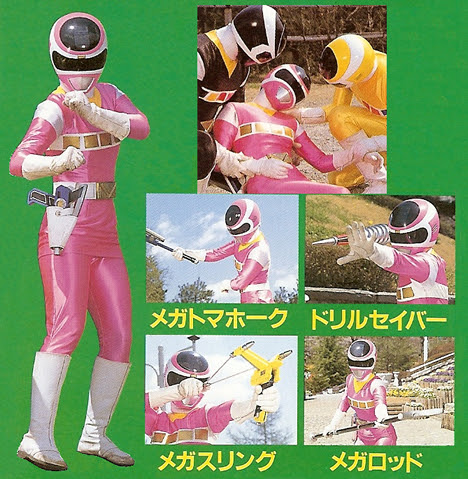 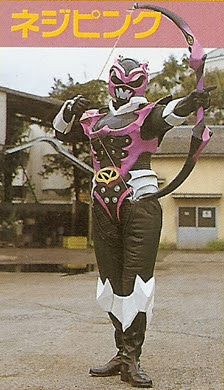 Neji Pink (1997) / Psycho Pink (1998-1999)
Heck, if I counted the Hanarangers, might as well count Neji Pinkie. No skirt. Psycho Pink was used in the episode "The Power of Pink" of Lost Galaxy when Valerie Vernon had to leave the show and they needed a reason why. Psycho Pink survived 10 Rangers destroying her team and she inadvertently lead to the death of Kendrix. 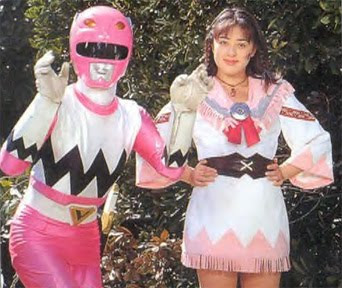 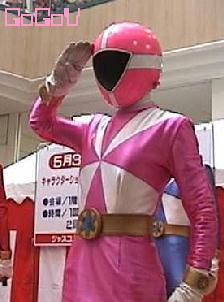 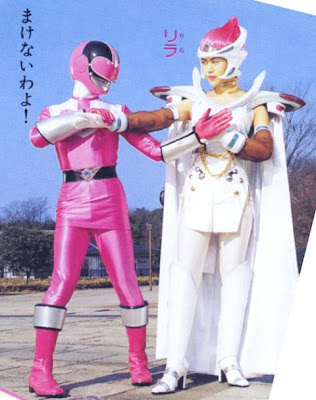 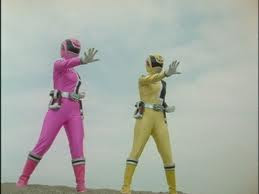 Deka Pink (SPD, 2004) / Pink Ranger (SPD, 2005)
First Pink Ranger in both franchises in 4 years, she like the other SPD gals had no skirt. There was also the Pink A-Squad Ranger. 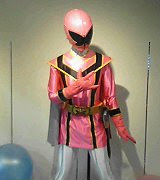 Magi Pink (Magiranger, 2005) / Mystic Pink Ranger (Mystic Force, 2006)
White legs, skirt with stripes and no trim. In Disney World, she had a meet and greet character. 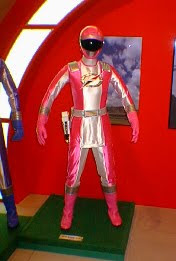 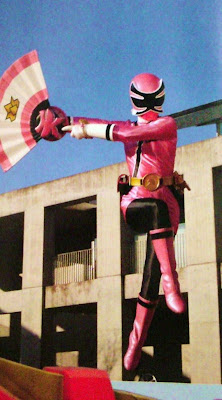 Shinken Pink (Shinkenger, 2009) / Pink Ranger (Samurai, 2011)
She had a skirt with no trim, black designs on top and black legs, just like Yellow and Red. 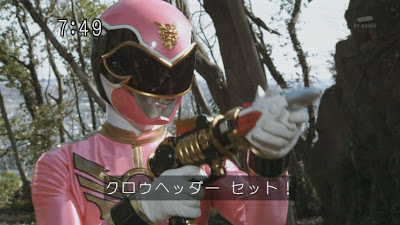 Gosei Pink (Goseiger, 2010)
All her teammates had white legs, she was no exception, she has a white skirt with pink trim.
Posted by Lavender Ranger at 3:46 PM

You should call the Hana Rangers the Flower Rangers. It's a perfect pun since Hana means flower.

it ids a funny pun.