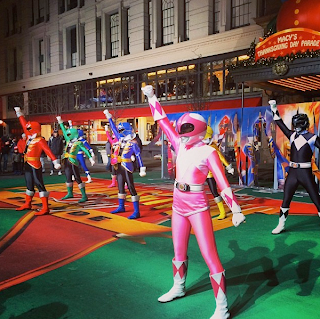 It is that time again! Starting the tradition since 2010 at the Macy's Parade with Samurai Rangers walking with Eath balloon, then a performance of Samurai Rangers and last year of Megaforce Rangers with Red Rangers.
"With Thanksgiving just two days away, I hope everyone is ready for some turkey, stuffing and not to mention the EPIC debut of the Power Rangers Super Megaforce!


Although I'm sure many of you already have your DVR's set, I wanted to pass along a friendly reminder to tune in to the Macy's Thanksgiving Day Parade, airing on NBC this Thursday from 9 a.m. – noon EST. You definitely won't want to miss the surprise Legendary Rangers joining forces with the Power Rangers Super Megaforce, I think Zordon would approve :)
Also, don't forget to watch the season finale of Power Rangers Megaforce this Saturday, November 30th at 1p/12c only on Nickelodeon, and check out the newest Power Rangers YouTube video to POWER UP your Turkey Day! Go Go Megaforce!"
- Our Power Force rep
The picture is from Instragram for the rehearsal for Macy's Thanksgiving parade,
﻿
Posted by Lavender Ranger at 8:32 PM