Zyuranger and Abaranger cameo in Kyoryuger vs. Go-Busters 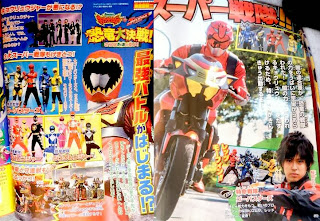 January 18, 2014 debuts the new teamup movie Kyoryuger vs Go-Busters, not only does the 2013 Sentai meet up with the 2012 Super Sentai but also the three Dino Sentai unite. I say 'cameo' because I don't think they will be in the whole teamup or not. Fans are excited about this as they could spell things for a MMPR homage with Kyoryuger footage. 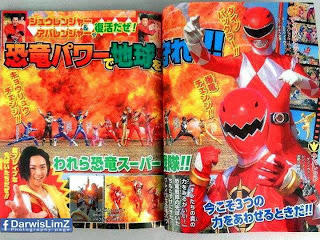 In this picture in the center we see the six Kyoryuger, three Abaranger an what seems to be 4 Zyuranger (maybe Tiger Ranger is in the crease of the book. Left to Right: AbareBlue, KyoryuBlack, TriceraRanger, KyoryuBlue, Pteraranger, Tyranno Ranger, KyoryuGold, KyoryuRed, KyoryuPink, KyoryuGreen, MammothRanger and Abare Yellow. Now it makes sense Dragonranger and AbareKiller are not there as they died in their series. But head scratching why AbareBlack isn't there. 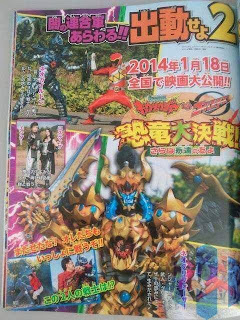 Gairudon (Zeltrax in Dino Thunder) from Abaranger appears with upgraded armor. Grifforzar (Goldar in Mighty Morphin Power Rangers) gets an upgraded form which has gotten mixed feelings from the PR fan base on Twitter. It seems we are getting most of the actors back. We see Geki (Tyrannoranger) there and the actress who played Mei (Pteraranger) she will be back. Also Enter and Escape on the page.

Posted by Lavender Ranger at 10:12 PM