Super Sentai Villains Plots too hot for US TV

This is not a definitive list. Here are some evil plots or occurrences villains did in Super Sentai that were omitted or not used in Power Rangers because either too violent or too controversial. But here are just the ones I can remember. So yeah, mention some in comments. 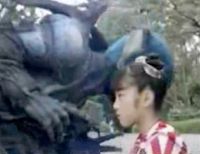 Zyuranger, Tottopatto (Baboo) is a vampire and in this picture he is trying to get blood from the little girl. His vampiric nature was omitted in MMPR.

In MMPR, the Panchinko monster was destroyed by the Rangers but in Dairanger, Dairynjuu (Serpentera) stepped on him.

In Episodes 43-44, Dairynjuu (Serpentera) made people jump off the buildings to commit suicide.

In Carranger, the Bowsock sought to suck the life out of a little boy, this never really happened, but they dreamed of it.

In Carranger, the Bowsock imagine growing children from other countries like plants. They were to become alien monsters resembling plants and vegetables.

In Episode 18, the monster had a gun to make people naked. They only made Dappu naked, making him dona more modern attire.

The three space wolves in Hurricanger, the brutal way they ate people's shadows, turning them into vampire/werewolf hybrids. This was omitted from Ninja Storm. 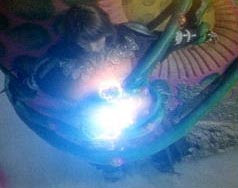 In Abaranger, when Mahoro (Later known as Jannu) was taken by the Evorian, she was pregnant with Asuka's child. The child would have been called Kasumi.She and Mizuho went to fight Dezumorzorlya and they were captured in the process. Dezumozorlya sent his demon seed through her to create Rije, so basically Mahoro was raped by Dezumorlya.

In Magiranger episode 26, the harpi's song made a parasite into the victim's stomach, killing them, in Mystic Force---this was changed to the Rangers turned into feathers.

In Boukenger, there was an episode where a lot of gun pointing. Episode 23 where the Questers kidnapped Souta and had him face his old spy partner, they was a lot of gun shooting and pointing guns. I have no problem with this for entertainment value but this would never happen in Power Rangers.

In Episode 46 of Boukenger, Masumi seemingly was going to betray his friends and become in evil.

Like I have mentioned before, how Mele killed Braco, this was changed in Jungle Fury.

In Go-Onger, not exactly an evil plot but Go-on Geen dresses in a dress as a grandaughter to cheer up an old lady, who is linked to the bad guys, but she later sides with the Go-Onger.

Posted by Lavender Ranger at 9:06 PM

The carranger ones are more ridiculous than controversial.

I wish America wasn't so uptight with censorship. The closest thing PR got to a gunfight was in an early episode of PRLR where Dana was on a bus with a bank robber. Of course he never fired it.

There's a brazilian flag at the Carranger flags photo! Yay!

OO had Will side with Kamdor to betray him. Will never put the other rangers in any serious danger though.