Squatt and Baboo (MMPR)
The first comic relief, in the first season they appeared with the monsters during battles because of the Zyuranger footage. But less in later seasons. For season 2, they only shot a little bit of them and reused that footage over and over again. For season 3, they were more integrated in the palace. They only created one monster in the first season, which was actually successful. 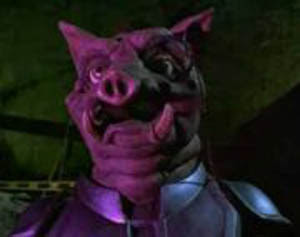 Mordant (MMPR TM, 1995)
Only appeared in the movie, he appeared with no explanation, puzzling fans. In an early script, he was said to be Goldar's cousin. Mordant took the place of Squatt, Baboo and Finster. He mostly was there for jokes and burping.

Sprocket (Zeo, 1996)
He really wasn't funny but he was funny looking and his plots were sillier than his parents' plots.

Klank and Orbus (Zeo, 1996)
As they followed Sprocket sometimes, they had shenanigans.

Elgar (Turbo and Space, 1997-1998)
Everyone hated him, including fans. He could be considered a warrior as he fought the Rangers regularly but he was more like comic relief as he goof around. For some unknown reason, he return for the next season.

Gluto (PRTF, 2001)
His Timeranger counterpart was the leader and was serious, but he became a stupid in PRTF and pretty much useless. I hate this pattern of turning serious fat characters into goofy fat slobs (Choobo in case in point).

Jindrax (PRWF, 2002)
He was a warrior but also a comic relief. He was loyal and in love with the villainess.

Choobo (PRNS, 2003)
Choobo was serious in Hurricanger, but he was a goofball, he wasn't instantly killed, he was shrunk and fooled around with.

Norg (PROO, 2007)
The most obvious comic relief than anyone else, he was an original creation that did not appear in Sentai.

Flit (PRJF, 2008)
Flit is a fly that used to be human, he was the announcer for the Megazord battles.

General Crunch (RPM, 2009)
Goofy and dumb, while he was serious in Sentai, yet again, yes, I know.

I will be doing the monster makers and a Dark Specter profile next.
Posted by Lavender Ranger at 8:35 PM

In my opinion: If Norg counts as an American Monster, I think Norg looks a little like the Kongazord of Wild Force. (Just a bit. His lederhosen straps represent the Eaglezord's wings!)

So I'm the only Elgar fan? Even the ridiculousness of this card sword only added to how goofy he was. Then again, I just remember Turbo better then MMPR, so Divatox and her goons are more iconic to me.