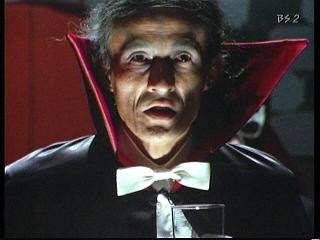 Doctor Shinigami is from Shocker's branch in Switzerland, he takes over after Zol's death until Hell takes command. Discarding his cape when he faces Hongo for the last time, Shinigami assumes the form of Ikadevil to fight Kamen Rider with Ichimonji held off by the Shocker Soldiers. With Tobei's guidance, the first Rider manages to overpower Ikadevil and weaken him before sending IkaDevil falling to his death. Ikadevil tries to rise once more, only to fall down and explode. 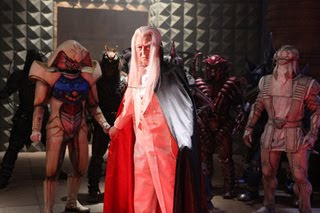 In the World of Decade, Eijiro Hikari (in the first Decade movie) is revealed to be a guise assumed by Shocker's Doctor Shinigami, an executive member of Dai-Shocker from Switzerland. Doctor Shinigami has the ability to assume the form of the Inhumanoid Ikadevil, a squid monster, which he claims is his greatest creation. Though seemingly killed in the final battle by Decade, Diend, and Momotaros using several other Riders as weapons, Shinigami resumes his Eijiro guise, who seemingly forgets ever being Doctor Shinigami to begin with.

Posted by Lavender Ranger at 12:01 AM