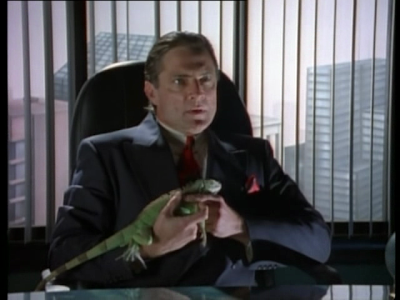 Karl Ziktor was the alas of the main villain Grimlord of VR Troopers (1994-1996), which lasted two seasons. Karl Ziktor was the owner of Ziktor Industries and a millionaire, he was responsible for pollution. He had three to four women in black dresses that stayed by his side, some were disguised Skugs and Ultra Skugs. Grimlord was his true identity. "Forces of Darkness, empower me! Take me back to my virtual reality!" The orb sends a current of energy into his body, changing his physical appearance. Upon transformation, he is taken to the throne room. In Season 2, he slurp Tyler Steele's knowledge of Virtual Reality into an energy prism, and used this prism to access a whole new army of Virtual creations and a new base of operations called the Virtual Dark Fortress. In fact, no one, not even the Troopers or Professor Hart, knew that Grimlord and Karl Ziktor were one and the same.

Grimlord's counterpart Gozou Kirihara in Metalder had a toy playset version of his Dark Fortress, which wasn't made into the U.S. He was portrayed by Gardner Baldwin. His name in the pilot of 'Cybertron' was Cyrus Riktor. When Karl first transformed into Grimlord, we would see old man white hair. His appearance changed in season 2 form his appearance in season 1 as they ran out of Metalder footage and had to adapt characters from Shaider so they add an American suit with Shaider villains. His outfit changed slightly with a cape was added. Gardner Baldwin also provided the voice of Mandible in Masked Rider.

Posted by Lavender Ranger at 3:25 PM