Power Rangers Samurai - A Fish Out of Water - Episode Review 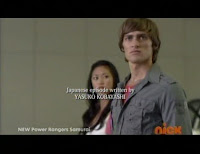 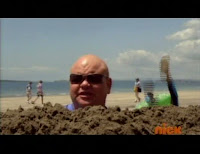 "Fish Out of Water"
Mike comments on Kevin being too high-strung. A new monster (Yamiror) is out there that with his stink, it makes people sick. Jayden sends Kevin on a mission to find the Swordfish zord. The four fight the monster and end up getting sick. Kevin uses a fishing pole to fish it out but with little success. Kevin thinks back when he was at a pool and his dad gave him his Dragon Folding Zord and told him he had to be a Power Ranger. The flashback is brief. He is knocked out and wakes up in a little tent with an old man. The old man helps Kevin to fish the fish out. When they get the fish out, he asks what kind of fish that was. Jayden fights the monster even though sick and the others quickly join him. Kevin arrives and they finish him off with their cannon. They then use the Swordfish with the Megazord and finish off the monster. Meanwhile, a mysterious villain (Decker) watched them. The Bulk and Spike subplot has them at the beach and Bulk buried in sand. 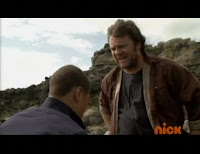 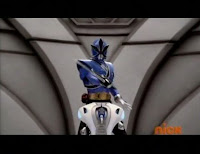 Review:
First time I notice the credit during the first act saying "Japanese episode written by." At least they give credit to the original writer, since essentially they are copying shot by shot with some tweaks. Like the man who helped Blue in Shinkenger was a former Kuroko, their black clothed helpers. I like the tone of this episode, I think it is the tone they want. It has been hard to figure out if they wanted to be serious or campy. With the puns, it seems they want a light complicated mood. Even though it doesn't have some underlying themes the original episode had and the fisherman seems sort of useless, it is still a solid dramatic and entertaining episode. 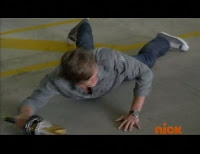 Posted by Lavender Ranger at 12:26 PM

Do you think wild force red could be the "Juuzo" character?

possibly, it didn't say who played his voice. It kind of sounded like him.

*sigh* I can only get the 1st 3 episodes On Demand.

Yeah, they give credits to japanese stuff since a few seasons ago, I think it was Lightspeed Rescue. But this is the first season to have japanese credits in the beggining of the episode.

I cant believe that YOU didn't see that.

ooh, Luca, it's already On Demand?

You know, I felt that the moment after Kevin caught the swordfish, not only did his whole demeanor change, but it seemed like his acting got a lot better. His lines felt more natural and didn't come out as awkward. Everyone else after that also followed through with the improvement and the tone of the episode flowed really well. I just think this must be that point in the series where the cast finally "falls into their roles."

What was the name of the Swordfish Megazord combination, I couldn't hear it?

Did you see Jii with a gold samuraizer

OMG, Jayden is so awesome, i just noticed he wears Grey Cons, that makes my day.

Lavender, we've seen pictures of Ricardo Medina Jr with the Samurai Rangers. If it sounds like him, it probably is.

Manuel, that was wood in Shinkenger. I wonder why they changed it?

I thought you have saw the episode have stated "Japanese episode written by." since episode 1, since it is so obviously written ><

Most of the time when the episode airs I am eating lunch and I just remember what happened and write it down, or review it by flipping through scenes on the dvd but don't usually read the credits.

The other four episodes were not terribly impressive, but this one stands out as being the best one. I just can't shake this feeling that that fisherman had played someone else in another season.

I'm also starting to think that they filmed the Bulk & Spike scenes way after they shot scenes with the rangers. Does that make sense to people?