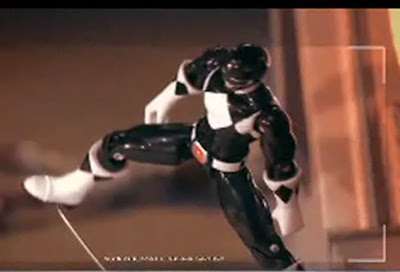 UPDATED 6:30pm EST
There is a Bandai America contest video at Amazon America website. The Mighty Morphin Black Ranger appears around 7 seconds. This has many fans curious to know where this came from and if it will be available soon. Here he is fighting a Grinder. It is not a repaint of the Super Legends Green Ranger because that Green Ranger's diamond is small, when this Black Ranger's middle diamond is larger. This could confirm speculations that the 2010 toy line will be MMPR figures. And no it is not a re-paint of the Anniversary Red Ranger figures, because I have those and they are 6.5 inches tall, while the Grinders are 5.5 inch tall and they are the same height. It has the mark on the feet which the Red ones didn't and the glove cuff looks like the red one but it's not. One fan was concerned about the Super Legends Pink Ranger figure we were promised by Bandai America through that poll they did, but we might still get it. If we get all 5 MMPR Rangers, we might get the Super Legends Pink too, so we might have two Pinkies! 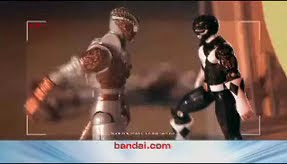 The permalink: http://www.amazon.com/gp/mpd/permalink/m31LET6IKP7275.
Posted by Lavender Ranger at 10:51 AM