Kilobyte is working on a new project. Venjix says Shifter will pay after their weapon is done. Dillon, Summer, Scott and Flynn are in Flynn's jeep following tracks in the wasteland. Dillon thinks they are close to the kingdom. The twins and Ziggy are with Dr. K in the dome and Scott tells them to wait for him. Scott is feeling pain. Back at the garage, Dr. K scans it. Shifter has a controller and says the Hyperbot was just the beginning and sends the signal, Scott is effected. Generation 15 comes out, new weapon, Crunch says it is a '10,' Venjix says it needs a mission. Dr. K says Scott doesn't have the virus and he is missing, then they hear the alarm. Shifter is attacking the city and the Rangers arrive to fight the tin can.

Shifter says he has a big surprise and he wraps the six in tape and swings them in the air. Scott appears as Ranger Red and blocks Shifter, Shifter controlling him against his will. Red draws his weapon. Black wants to shoot. Blue says they don't have a clean shot. Shifter is attacked. The controller goes down and the gear falls out of Scott. Everyone sees Tenaya, Dillon runs to her. He sees she is brainwashed, she says that she is Tenaya 15 in a robotic voice. Shifter becomes huge. Scott is not sure if he can do it, Summer says it's okay. Dillon morphs. Red looks at the controller gear. The zords attacks Shifter. The yellow zord bites the gear. The other zords attack Shifter. Red energy level climbing. They make G12.... i mean, the Ultrazord. Blue takes Red's spot and Shifter goes down.

Red meets Shifter in a quarry. Red does a summary of their plight and they fight. Scott delivers a final blow, takes off his helmet and Shifter explodes behind Scott. Gema works on the control key, Dr.K explains the key. Ziggy wants to control lovely lady. Dillon asks if the key is trashed, asking if it will work on Tenaya. Dr. K says it might work for three to four seconds. Dillon wants to use it on Tenaya. Back at the evil lair, the Grinders bring the scraps of Shifter. Tenaya is powered up and go. Venjix ordered an attack and send a new bot. Kilobyte is mad. Venjix wants him to help him rebuild a new body for him, using Shifter. Dr. K gives Dillon a new cannon with the control key, they only got 3 seconds.

The new attack bot (the exercise weight one) is attacked by the twins and they fight the Grinders. The other four arrive and fight. Dillon comes behind with the cannon and puts the control key in. He waits for Tenaya. The bot makes Ziggy go down. Summer fights the bot and he pounds her. She morphs and then Ziggy morphs. The twins then morph. Flynn takes a Grinder down and morphs. Scott takes Grinders down and morphs. Blue goes down, Red holds the bot down. Tenaya attacks Dillon. Dillon aims the gun at her but she swipes it out of his hand and it swings away. She tosses him away and he morphs and lands. He goes out for the cannon but she lands and fights him. 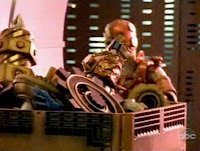 The bot beats up the others. Black says he won't destroy her as she continues fighting him. She points her gun at him, he uses his shield and her power destroys his shield. A sound powers down as she sees him and she retreats. He is about to shoot her when he sees his friends in danger. They are all down, he realizes what is more important. He shoots the bot and it goes down. They make the RPM enforcer and with the combo of the Twins' power, they destroy the bot. It is made giant and Road Attack Zord fights it. Mach Megazord then attacks the bot and destroys it in one fell swoop. Black sighs as he looks down at the weapon. After the commercial break, the control key is broken and Ziggy is still stuck on his idea of controlling women. Dr. K scans Dillon, saying he made the right decision, Dillon is still upset. The virus has spread to 40%, when it hits 50%, he will loose control to Venjix. She can't stop it. Summer and Dillon exchange looks.

Review:
There was no much to this episode. It had the plot points but it was like it just happened, stuff just occurs. But, since they have given us such great episodes already, I forgive them with no problem. Tenaya 15 has no major design overhaul than Astronema did when she went evil, just a design on her face and her armor gear is now silver and has two metal stripes on her stomach.

Posted by Lavender Ranger at 5:03 AM