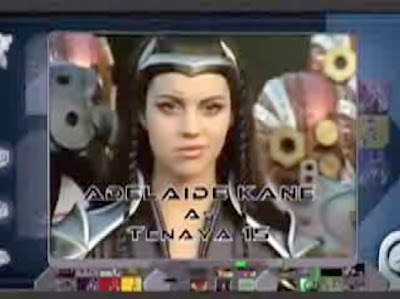 Episode Summary:
Tenaya 15 gets a new card on the opening, I didn't think they would change the opening, so I didn't record it---I was loading in a new disc. It's not much, its just her (with the cyborg stuff on her face) and it says 'as Tenaya 15' instead of Tenaya 7.

Ziggy is alone and finds a penny, saying it is his lucky day. He spots thugs and starts running from them. They try to fight but he avoids them in a rhythmic coordination. He then disappears. Dr. K is working on a new weapon and he teleports as Ranger Green in her chair and she accidentally sits on his lap! Tenaya looks at guards guarding a gate. Back at the evil lair, Venjix meets his new body that looks like Shifter, it is black. Venjix uploads into it, rather quickly, with no explanation on how. Tenaya comes in and says this mission will be difficult and bows to him.

Ziggy explains to the gang that he owes them, saying there is a mix up with numbers and hijacking the truck... $5 million. He says he is a ghost. Summer says ghosting him doesn't make sense. Frenso Bob tells his goons to 'ghost him.' Tenaya comes in, the guards hand her and Bob tells them to let him go. She asks if he controls the truck drivers, she says she has a job for him, giving him Ziggy in return. Ziggy panhandles to Flynn with a can saying 'save Ziggy,' the twins give him rocks and buttons. Kilobyte attacks the city and confronted by the seven. Dillon fights him and goes down. He goes towards Ziggy, he cowards and Kilobyte grabs him.

After the break, the Rangers regather. Kilobyte says its boring. The six morph. Kilobyte drops ZIgy and fights Blue, drops him, fights Yellow and Black and drops Yellow. Black and Red go after him and he kicks down Black. He fights the twins and brings Silver down. Ziggy morphs. Red and Green fight him and they both go down. The truck goes up to the gate. It is a pick up for Truman. The driver gives them a paper clipboard, they say its digital now, he says if they want to call Truman an old man and they let him in. The Rangers go down to Kilobyte's finisher. They de-morph. He leaves laughing. Tenaya grabs Ziggy and covers his mouth. The others realize he is gone.

3 Grinders take Ziggy in and he says his family is high-strung. He says he is not scared of her or Venjix. She says she is taking him to Bob. K says Green's signal is out, Black says she is as bad as the machines. Scott says he is sending the twins to her. K widens the search for Green. Bob gets the package and it glows red and he laughs. The Grinders puts the bombs in place all over the city like light bulbs. Ziggy tries to convince Tenaya against turning him in. A black limo arrives and Bob comes out. The twins and K work on the new weapon. She tells Red of a breach in the system. They are to make the exchange, Ziggy for the case. The case is given to a Grinder, Tenaya opens it.

After the break, Kilobyte faces the four Rangers left. He takes them all down. Bob wants Ziggy, Tenaya brings her gun up, saying he is valuable to them. Ziggy fights the Grinders and Tenaya and gets his morpher back, he morphs and tells the gangsters to run. The Rail Saber is finished. Dr. K detects Green. She tells Gema to help "Zig-- Ranger Green." The gangsters leave in the limo. Tenaya fights Green. Gold arrives with the Rail Saber to save the four. Gold loads the cells 11 and 12 (T-rex and Triceratops) into the saber and fights Kilobyte. Kilobyte goes down. Green and Ziggy fight. Silver flies in, literally and they both fight Tenaya. Gold gives the saber to Red, he puts the mamoth cell into his gun and makes the Rail Blaster by combining the two and take down Kilobyte. Kilobyte says begin the download and becomes big.

PaleoMax is formed and the other zords attack Kilobyte. Silver and Green fight Tenaya but go down. Tenaya picks them both up and drops them down. The Grinder and Tenaya leave. ValveMax is formed with Gold zord as an arm and HighOctane fights Kilobyte. K has detected charges around the city. The Grinders are about to detonate it when Mach Megazord arrives with Ziggy's zord as an arm. Road Attack Zord is deployed. The five robots kick Kilobyte down. Kilobyte attacks them and out of the blaze, the 12 zords comes towards him and form the Ultrazord. They destroy him, he says it isn't over yet.

Back at the evil lair, Kilobyte comes in damaged and moaning. Tenaya brings in the case. Venjix says the final strike is coming up. Back at the garage, Ziggy is packing and moving out, scared. The others try to convince not to leave. Fresno Bob comes in and his men grab Ziggy. He says when he saved his life, he figured he is 'all right' and they are now even. Ziggy is thrilled. He calls him 'bobarino' and Bob tells him not to push his luck.

Review:
Tenaya 15 doesn't have the 'moxie' she used to have. Even though Astronema was brainwashed and evil, she still had a unique personality. The robotic-like Tenaya is listless. I didn't like how the zord battle was reduced to a few minutes because with the unique zord combos, it was kinda too fast to get. Footage of Episode 44 of Go-Onger was used, meaning they only got footage to six episodes left and there is only 4 episodes left. I think this episode was made to wrap things up with Frenso Bob and the cartel since there are only 4 eps left. No new episodes next week, just re-runs. ABC schedule says Episode 29 will air in December. No episode titles or descriptions have been revealed as of yet. Did I mention, there are only 4 more eps left?
Posted by Lavender Ranger at 5:30 AM