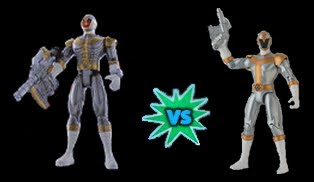 There have been complaints through the years in the fandom of the state of the Power Ranger figures. It all started with the Power Rangers in Space figures that started featuring abs. All figures before were plain. In fact, the original female figures had no boobs. The first female figures to have breasts were the Power Rangers in Space figures. Above is a picture of the Titanium Ranger figure in 2000 that had many muscles that doesn't exist on even a muscle-bound man and to the right is the new Super Legends Titanium Ranger figure (2009) who is a bit more realistic. Back in the day, there was more concern about girls' self image with Barbie and other dolls, but nowadays it is a pretty equal concern. The majority of the Power Ranger figures have been joked that they look like they are under 'Steroids.' The RPM figures didn't ahve as much muscles and look pretty realistic. Except for the new MMPR figures... they are back to the steroid look. Most superhero figures are like that these days, look at the Pro Wrestling figures and Venom. Will this trend change anytime soon? I don't think so. Should it? Maybe they shouldn't be as exaggerated. Especially with a show, in which even though they wear skin-tight spandex, we don't see much in ab work but mostly more in crotch-wise. 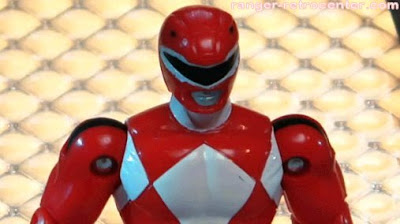 Posted by Lavender Ranger at 11:33 PM