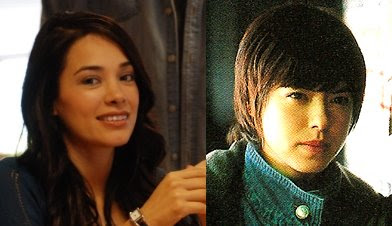 Maya Young / Yui Kanzaki
Both damsels-in-distress women in the middle of the 'Rider War.' Yui's past is murky and depends on the series and the 13 Riders TV Special, but what remains the same is her connection to her brother Shiro, who she is seeking. I will try to explain it but maybe I will get it wrong. She died young but her mirror self offered herself and then forgot she was from the mirror but she would die when she became 20. Yui and Shiro created the mirror monsters and since the monsters have no life, they come to our world seeking life force. And they listen to her but she doesn't know why. Turns out Shiro is the creator of the Rider War and was seeking a way to save his sister. As for Maya, she is a blogger/wanna-be investigative journalist who believes in sci-fi. She gets kidnapped every so often by mirror monsters and that's how she can see them. She helps Kit and to a lesser extent Len.

Yui, I would nickname 'Mousy Rider' because all she did was 'mouse' around, crying, whining and dramatizing the place. In the end, Yui dies and everything is rebooted. Maya seemed to care for Kit like a little brother and was thrown into the war, she didn't care about anything else but the safety of the world. Maya and Yui both have female family members that own businesses, Yui's grandmother owned a tea shop that Shinji and Ren lived at and Maya's aunt owns a book shop everyone visits. Maya has two friends--Trent and Lacey, Trent knows everything about the Riders and has a crush on her but Lacey doesn't believe it and betrays her by giving the Rider info to a rival journalist.

Unlike Miu, Maya actually became a Kamen Rider, breaking the unspoken rule that the Kamen Rider damsels-in-distress shouldn't be Kamen Rider. Although, Natsumi Hikari of Kamen Rider Decade becomes Kamen Rider Kivaara, but only in the final movie. Eubulon reassigned the Siren deck to Maya to be Kamen Rider Siren. Maya was briefly a warrior until Kase was taken out of the void and she returned the deck to her, saying she rather fight evil by writing. Maya and Trent helped out the Kamen Riders defeat Xaviax and faced him. In the last episode, she wrote a 'fictional' story about it and her aunt had a big chain store. She also ended up with Price.

General Xaviax / Shiro Kanzaki
There was no 'main villain' in Ryuki, it has been said by fans that Xaviax is more like a Kamen Rider 'Showa Era' villain. Makes sense since the director/writer is a Showa era-fan. Xaviax (left and center) is basically an alien who has taken over the mirror world of Ventara and is now to enslave our world. Xaviax misleads young men and promise them everything they want to become Riders. The original Ventara Riders are exact duplicates of Earthlings and the DNA is locked to the Advent Decks, so since Xaviax vented the originals, he had no choice but to get the duplicates to become Riders on his side. He manipulates and tricks them to do his bidding. Shiro Kanzaki (right) was Yui's brother who sought to save his sister from dying when she was twenty so he created the Rider War. I may have this wrong but at some point he died and it is probably his mirror self that manipulates the other Riders for his own whims.

Shiro even controls Odin, getting other people to be the body but to do his whims in order to get the big wish at the end of the war--to save Yui. Xaviax also controls Wrath, Odin's counterpart by taking over his body and fighting as Wrath. Xaviax has a sick sense of humor and thinks ahead and used Kit as a pawn. He didn't think highly of any of his pawns other than Drew, James, Adam, and Kit. Wrath is vented and Xaviax is left behind---leaving Len the only Kamen Rider left. Xaviax then steals the dragon deck and gives it to Adam, who was not vented. Xaviax forces Adam to infiltrate his friends and betray them once again, in order for him to keep his love Sarah. Xaviax then fought the Riders in the penultimate episode, and was outnumbered 16 to one. They used the special link card Eubluon gives them to completely destroy him. 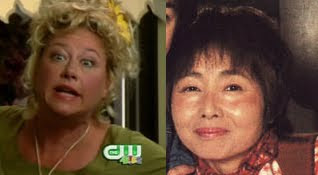 Grace Kiefer / Sanako Kanzaki
Grace was Maya's aunt who owned a book store, Sanako was Yui's aunt (the sister of her father) who owned a tea shop where Shinji and Ren lived and worked. Victoria Jackson is very talented and very funny, being from Saturday Night Live, but unfortunately she wasn't that funny here. She was just like out of it, and her acting matched everyone's else's: atrocious. Like Grace said, "I do not like this." Grace was flaky, new-agey and more concerned with her book store than with her niece Maya. Sanako on the other side was comic relief, seemingly out of it but was more intuitive that people initially thought. Sanako did not like Ren/Knight. Grace was not seen in the finale but she had a big book chain store.

Eubulon / Hideyuki Kagawa (Alternative) and Hajime Nakamura (Alternative Zero)
Kamen Rider Alternative and Alternative Zero were not Kamen Riders like the others, they were two men that created their own decks, so they weren't let's say, 'official' or 'original' ones that Shiro Kanzaki (Yui's brother) made. Hideyuki (center) was a scientist who used Tiger's deck and made the Alternative deck. He wanted to close the Mirror World but was killed by Tiger. Hajime was sick the day Shiro began the experiments. Hajime (right) never forgave Shiro and Yuri, for the events that occurred. Hajime eventually joined Professor Kagawa to stop the Rider War as Alternative. However, Nakamura's reasons were for vengeance and thus was killed by Satoru because of those reasons. In KRDK, Eubulon (left) is the 'Vent Master' and played by the legendary Mark Dacascos. Strange enough Alternative's Contract Beast Psycorogue was used as a regular monster in KRDK before Ebulon even appeared. Alternate and Alternative Zero were the same suits basically (with minor different details) so they came one for KRDK. Eubulon helped Xaviax with his mass people transporter, had a change of heart and decided to create the Riders in order to defeat him. Some fans believed Eubulon was like a 'dues ex machina' but he really was the mediator between the Riders--snapping some sense into Kit before he vents Adam, saying his nightmare would come true. Eubulon creates the link card in the penultimate episode in order to defeat Xaviax. He heals Chris' asthma, heals Kit's dad, and helps teleport the Ventarans from Karsh back to Ventara.

I didn't put Eubulon in the other post about the riders because I thought it would be too long as it already was and to 'beef up' this post.
Posted by Lavender Ranger at 8:38 AM

Xaviax is the master of disguise and the trickster with psychic force just like in Star Wars.