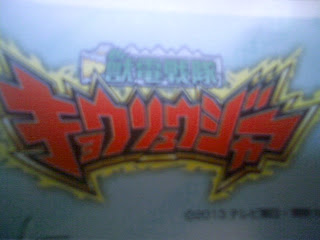 UPDATED 12/7/12 5 PM EST
Jyuden Sentai Kyoryuger is the 2013 sentai. It is said former Power Ranger Executive Producer and Stunt Coordinator and Gokaiger stunt coordinator Koichi Sokomoto will be one of the main directors.﻿ Riku Sanjo (who wrote for Kamen Rider Double and Fourze) is to be the head writer for Kyoryuger, he never wrote for Sentai before. I incorrectly thought we would get something by the 1st of December, having been spoiled last year by early bird stuff. Maybe Toei didn't plan an announcement that early because it was a weekend, usually their announcements hit before Saturday. December 6th is when the toy catalog comes out. Many fans have commented on this being the THIRD sentai to have Dinosaurs as a theme but it is not the first to repeat a theme, maybe it is the first one to repeat a theme a third specific non-vague theme. Dinosaurs and locomotives are fairly popular with kids so it is a gimme. 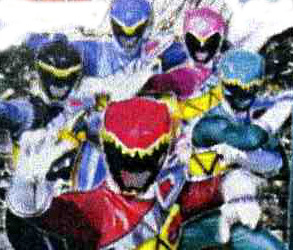 - Five Colors: Red, Blue, Green, Black and Pink
- Second time since Changeman there is no Yellow
- Red: Tyrannosaurus, Pink: Triceratops, Black: Parasaurolophus, Green: Velociraptor and Blue Stegosaurus
- GabuTyra (Tyrannosaurus), Stegocchi (Stegosaurus), and Dricera (Triceratops) gattai into Kyoryuujin, the main robo.
- Parasgan (Parasaur) and Zactyl (Velociraptor) are replacement parts for the main robo.
- They have batteries (JuuDenchi) they insert in stuff like Goseiger's cards, Gokaiger's keys, etc.It plays Samba music when inserted.
- Return to Spandex, Go-Busters this year was leather
- Pink is the lone female, which hasn't happened in a series that started with 5 since Gaoranger. Lone Pink females haven't happened since Timeranger.
- First time Triceratops is Pink, last three times has been some form of blue (Go-Onger had one too!)
- Third time Tyrannosaurus leader has been red, but there has been blue Tyrannosaurus (GokaiSilver) and orange in Goseiger.
- Stegosaurus was red-violet in Abaranger, first time a Ranger has that dinosaur.
- Parasaurolophus was green in Abaranger, first time a Ranger has that dinosaur.
- Velociraptor is the first time in Sentai, excluding the Raptor Riders of Abaranger.
-JyuuDenChi are where the Dinosaur souls are stored, they are the batteries.
- Their henshin item is the GaburiVolver (Gaburi means 'to bite' and Volver is possibly from Revolver). The JyuuDenChi is a set in the "Gaburinchou' and henshin is carried out with sambo sound. 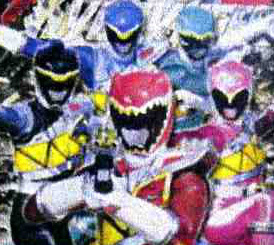 I have to say that I am a little disappointed that the pictures aren't clearer. We got clearer pics of Go-Busters last year by this time. It seems Toei is keeping this one under tight wraps. The blurriness of the pic threw me off but now I've gotten used to it. I've hear "Retro" thrown around and it is true, I does look a bit of a throwback. I like how the black of the visor wraps around the mouthpiece. And not being a huge fan of yellow, I'm liking the color lineup, it's different. But my 3-year old grand nephew would had liked a male Yellow. I showed him them and he stuck a Yellow Ranger in my eye.

I understand the thinking behind one female and 4 males. Because like it or not, it is a boy franchise. And boy toys sell more. And lately, Bandai has only had limited figures of the females so instead of having 3 boy toys to sell, they can sell 4. Look at Jungle Fury merchandise (T-shirts, birthday supplies, bookbags, etc.), most had Red, Blue and Bat Ranger, instead of Yellow Ranger. And whenever they make extra rangers in the US (Spirit Rangers in Jungle Fury and T-Rex, Mammoth and Triceratops Rangers in RPM), they are all male.

The Kyouryuger will henshin with a gun (I guess Saban has to add some glasses again---joke). They'll also get some sort of sword weapon.
Posted by Lavender Ranger at 6:16 AM

Awesome. Been a long wait (I meant that just as loving to see a new Sentai, not a diss towards Go-Busters). I think the suits look awesome and will be fun to watch when it airs.

It took me a minute to realize there was no yellow ranger. That'll be a first when we get to the PR Adaptation. I think it took a while to dawn on me is because of the abundant yellow on the chest with the Gingaman style triangle bite pattern.

Rex as Red is unsurprising, though I am pleased that Triceratops and Pteradactyl are getting a bit of a color shake up and throwing in new dinosaurs for good measure.

Erik, it took me a while too! When I read a comment about no yellow, I went back up and saw the picture to realize it is true. I make a lot of fanfic drawings that have no yellow, and my deviantart followers complain about it. I am not a fan of yellow and commend them for doing this.

As a business stand point I understand the reasoning behind one female, because like it or not, it is a boy's franchise and it makes sense to have 4 males. Look at Jungle Fury merchandise, almost no yellow at all. Go-Busters also has 4 males and I am sure that inspired this.

At last! There is yellow ranger! We needed something different!! I CANT WAIT FOR THE CATALOGUE PHOTOS!

I know its very unlikely but does anybody else think that maybe this is the year we get a true female 6th ranger?

thetruebigboss, we have no idea at this point. Speculating is fine and fun. It would be great but I have realized that just like the Red Ranger, the six ranger is most of the time a male to sell toys for the boys franchise. Go-On Wings suppiled a loop hole.