UPDATED 12/6/12 10:30PM EST
This post will deal with the Pros and Cons of the show itself, merchandise, promotion, etc. of Power Rangers Samurai and Power Rangers Super Samurai from Saban Brands. I've been meaning to do this for a while but waited until now that the series is almost done.


Merchandise
I have publicly complained that there was not much merchandise in 2011 for the first season of Power Rangers Samurai but there has been a lot more in 2012. Elie Dekel has expressed that getting merchandise has been a journey. I personally think there was a lot of debates of money and licensing and such. But now it seems there are more things coming out that Disney never did (Squinkies, Morphsuits, phone apps, app games, Mashems, Trivial Pursuit, Monopoly, etc.) but there are still things that Disney did that hasn't appeared yet (Toothbrushes, towels, etc.). I also commend them on the DVD box sets and finally bringing MMPR to DVD. Also having Super Samurai on Blu-Ray. 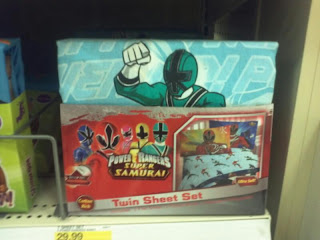 What I would really like in merchandise is Power Rangers to emulate Batman, Spider-Man and Star Wars in adult Collector products such as toasters (some have Darth Vader faces), waffle makers (same), busts, helmet replicas (like Halo), car accessories (steering wheel cover, mats, air fresheners, seat covers, windshield covers, and antanee heads), Shot glasses, CD Cases, and a Monster Jam monster truck (like Ninja Turtles has---this is my nephew's request). Update: Today I was informed by Raz that there are indeed bed sheets. 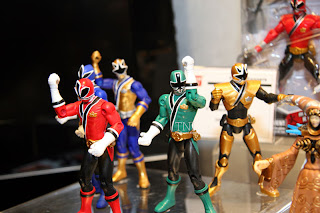 Toy Line (Bandai)
Great part of the Bandai toy line was that most of the toys were show-accurate. The Disney toy lines seemed to be over-flooded and full of re-paints and re-packaging. Also, it was full of toys that weren't on the show. But the Samurai toy line was mostly show-accurate, save for one toy that was originally from Operation Overdrive and the various bikes and the Tiger Tank. What I didn't like was how the girls were treated. When the male regular figures came out, there were no females in the Fall Line of 2011. The regular females came out in Spring 2012 but with the Super mode males and no Super modes were made for the females. The female Rangers came with skirts identical to the one made for Pink MMPR Ranger, which is triangular. 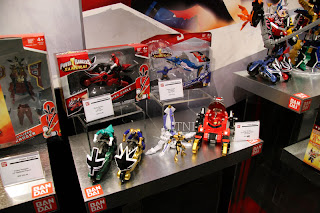 Also, their regular weapons came with the Mega mode figures and other unique weapons came with the regular figures (except for Red who got his canon). But I do have a sinking feeling that some of the 'Original' Samurai toys that were not from Shinkenger were constructed in better quality than the other toys such as the Mega Blade, Battlizer Red Ranger figure, etc. compared to the Samurai Megazord, which is not like the original ShinkenOh nor the Spin Sword, Samuraizer or Gold Morpher. They later than released a deluxe Samuraizer. But all in all, the toy line was 100 times better than the Disney line. What I would like more than anything and I am sure my fellow Power Force members MorphinLegacy and Rovang would agree with me is MORE FEMALE figures [But given what we know about Sentai and Power Ranger's future---Go-Busters (possible PR in 2015) and Kyoryuger (possible PR in 2016) have 1 female, but Kyoryuger could change ala Go-Onger.]. But it seems Power Rangers Megaforce will be going the same direction as Samurai. 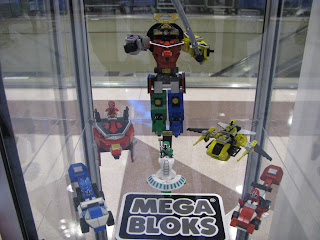 Toy Line (MegaBloks)
Power Rangers has a long history with MegaBloks since Ninja Storm (but it stopped with Mystic Force) and the MegaBloks take on Samurai has been a mix bag in my opinion. Some good, some bad. Reminds me of products of Power Rangers back in the day. Some were shody merchandise and others were real good quality. In Disney (many may not agree with me), it was rarely shody merchandise but I might be wrong. Anyways, with MegaBloks we were served mini figures in blind packs that were wildly popular with both kids and collectors. What I didn't like was they mixed up the modes so it was hard to form a team. For example, they had Mega mode Pink in series 1, Mega Mode Blue in series 2, Mega Mode Green, Red and Gold in the Hero Packs and they never released Mega Mode Yellow. Also, they never made a Pink Ranger Turtle Zord, which irked fans but they were comitted to not making Pink Ranger products in fear boys wouldn't buy them. So much that they put the Pink Ranger cockpit within a big expensive set of Samurai Megazord Bonus Pack. I liked the style of the figures but now they are changing the design with Megaforce. Let's see how this one goes. 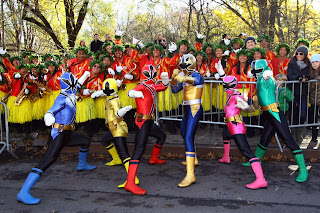 Promotion
Saban has been really great at promoting Power Rangers, with appearances of suited Rangers at the Macy's Thanksgiving Parade, the Rose Parade on New Years day, Power Morphicon, San Diego Comic Con, Licensing Expo, the Japanese relief event, White House events and much more. Also they had a big premiere for Samurai. They have also gotten Twitter, YouTube and Facebook accounts for Power Rangers and mPower program. They have lots of YouTube viral videos like the Dubstep one and the current one with album cover recreations. 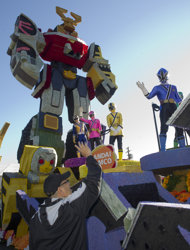 Misc
Everyone was excited about Saban taking over Power Rangers again but adult fans were mostly dissapointed with how Samurai turned out. Some feel that Saban dealt too much on promotion and hyping the show and not the show itself. In show business, it doesn't matter how big you taut a product, the product itself should be good. All flash, no substance. I think they did a honest effort but just took it in a direction that adult fans weren't expecting. Samurai has a great charasmatic cast and I hope the best to them in the future. I do personally think that Saban Brands concerntrated too much internationally and didn't concerntrate enough in the United States in promotion and events. But it is a slow process and I'm starting to see the fruits of their labor now. Power Rangers is starting to have more promience but not enough in my opinion. Another thing that is bugging fans is the 2 year thing, they are so used to just 1 year for a theme. 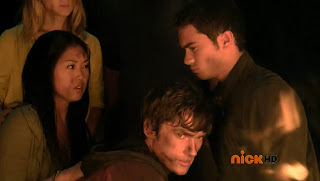 The Show Itself
Last but not least! Jonathan Tzachor is the executive producer of Power Rangers Samurai and decided to follow the source Shinkenger closely. I think its funny since many fans thought Samurai's Japanese theme would be unadaptable and not do well in the American market, Saban showed them wrong. They called Kanji "Symbol Power" and kids quickly latched on. Many know the symbols by heart and identify them correctly. Now, a lot of adult fans have complained that Shinkenger was followed way too closely and Samurai was just a carbon copy. There were some changes: no Kuroko (the black cloaked helpers), Bulk and Skull added, cockpits changed with Mega Mode and Shogun Mode added, Shiba Clan being 'Lords,' Dayu's killing background, Uramasa's dark background, Xandred's sake and other tidbits. Kids I've spoken to love the show and see no problems.

Fans have a long list of problems with the show: the writing, the acting, the puns monster say, and overall blandness of the show. Saban and crew said the show would be 'lighter' than past seasons but it is hard with such dark material of Shinkenger. I applaud Tzachor and crew for trying to copy Shinkenger as it was a good series. But it is kind of hard with amatuer actors and emotionless deliveries of lines. Shining light came in Hector David Jr. who brought enthusiasm and attitude to the role of Mike. He just understood it and got it. In many ways I see Samurai as a very complicated satire of Shinkenger, in the kind of way it is so bad its funny and that the seriousness of the characters is just supposed to be taken lightly. I really don't hate PRS. I know lots that do or just think it sucks. My advice to the writers is to not talk down to the audience, make sure the actors emote, and write their own stories. Word is that with Megaforce, they will have more original storylines.
Posted by Lavender Ranger at 12:33 PM