Since I missed out on writing reviews on these episodes (and Stroke of Fate), and I got the Complete Blu-Ray set, I will be doing them today. Pictures thanks to Samuraicast.com as always. 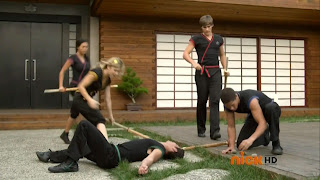 The gang spar and Kevin thinks about Serrator, that he is gone rogue and up to something big. Mike was to spar with him but fell. Kevin puts a dot on each attack and they form a line. Serrator calls a monster to create misery around a locator he gives him. Antonio is proud of the fish he caught and takes picture of it in a photo booth Bulk and Spike relax doing mediating techniques in bright blue and orange outfits. Octoroo figures out the Serrator will be making a crack in the world and that Deker needs to do the final strike. Serrator has been planning for this for years. With Dayu and Deker, Dayu is mad and wants to go after Serrator. Deker still thinks Serrator will be fixing his Uramasa. 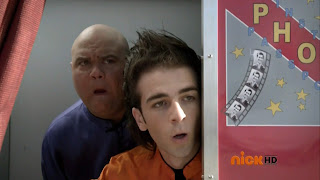 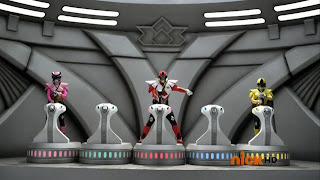 Jayden goes super and fights Serrator. Serrator blocks the Rangers and Jayden takes the girls to fight the monster as Serrator fights the other boys. Deker arrives and Serrator explains the plan. Jayden destroys the monster and the three form Samurai Megazord to fight its big life. Deker wants his sword but Serrator tells him he won't give it to him without a little favor. The girls use the Beetle and Swordfish and make their combos with Megazord after Moogers holds it down. They use Tiger and two Spitfangs arrive. They become the Battlewing Megazord and take them two down. They then call the Claw Armor Megazord. Jayden goes to Shogun mode and destroys the foe. 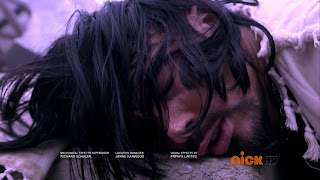 Serrator says that the only way to release his curse, he can do it with one quick slash with the Uramasa. The energy surges among the line, wiping out the Rangers and Dayu jumps out of the way. Each point explodes with purple energy. Serrator says he knows in the end Deker will do his bidding. The Rangers are unmorphed and on the ground. Deker faints. Serrator laughs.
Episode Review:
The Bulk and Spike stuff was funny and needed as the rest of the episode is dire and full of despair But the funny parts seem to grouped together giving the episode a disjointed feel. Other than that, the Special Effects from Shinkenger look great. And also kudos to the team in New Zealand to make all that debris and makeup of the gang hurt. Because back in the day of MMPR, the Rangers wouldn't even have a smudge and end up at the park.
﻿
Posted by Lavender Ranger at 6:20 PM