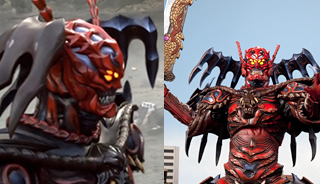 Xandred/Doukoku
Basically the same, both scary and strong. Only thing is that Doukoku drank his alcohol Sake and in Samurai, it's called 'medicine.' They die the same way as well. 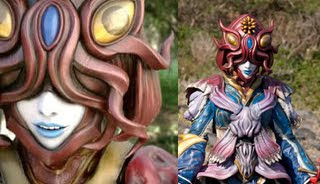 Dayu
Same name, similar stories. The original Dayu is much darker, as she killed the man who she loved and his wife, her rival. Both connected to the pink ones and both care about the half-human. She was once human in the PR version that was in love with Deker and made a deal with Serrator and he made both her and Deker into Nighloks. The way they die is the same, they both become dresses and help their boss become stronger. 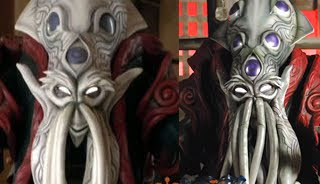 Octoroo/Shitari
The suit in New Zealand seems to show the mouth out more. Very similar, they both say nonsensical words and they are the smarty-pants and their alliance is always called to question. They both die in the Sanzu River. 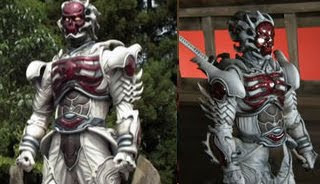 Deker/Juuzo
Both are half-human, may have become in different ways. Juuzo is a Gedou and Deker is similar, but he didn't choose to become a Nighlok. He was a human in love with the human Dayu but when he is injured, she makes a deal with Serrator and he tricks her and erases Deker's memory and makes him a half-human, half-Nighlok. They die in similar fashion but different details. Kevin stabs him in the back and he dies. They both have the same plot: to fight the Red one with his sword. Uramasa is made of souls in Shinkenger, while in PR it was forged by Serrator. Deker is played by Rick Medina, who played Cole in Wild Force. 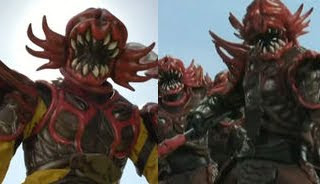 Moogers/Nanashi
Both grunt sets fight in human height and giant height and some had wings and flew. 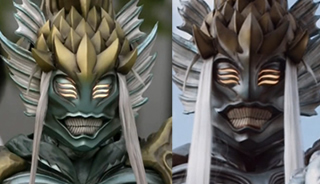 Akumaro/Serrator
Akumaro Sujigarano appears on Episode 27, who takes over for Doukoku and plots to get rid of him. I didn't like the character of Akumaro, I felt he was cliche of a 'new' character to come mix things up and it is the same thing all the time. Serrator's voice actor and the quickness of episodes helped make me like him. Serrator was more of a skilled villain with precise plans. While in Shinkenger, it felt too drawn out and tedious.
Posted by Lavender Ranger at 8:11 PM

Actually Octoroo/ Shitari gets killed in the Gosei Vs Shinkenger movie. The Gokaigers killed him off not because of the Sanzu River.