Corrections Updated 12/4/12 12:17PM EST
Like I was asked long ago to compare season 2 of MMPR to Dairanger, here I am comparing Power Rangers Samurai and Super Samurai to Shinkenger. Many people have pointed out how Samurai is like a shot-by-shot remake of Shinkenger, but character points are different and how the actors handle the characters is different. 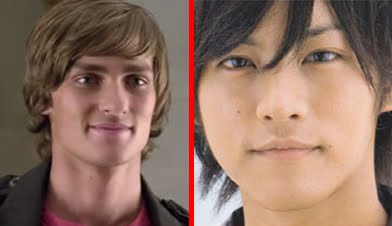 Jayden/Takeru
Takeru was the brave and serious leader with a burden. Jayden is the leader, who seems to have no personality until more episodes into the series. Jayden is more cheery as Takeru barely smiles. Both lost their fathers, who were red warriors and they were raised by their Jii. Takeru had more embarrassing things happen in his childhood like peeing his pants in fear of a ride and was disrespected by Chiaki, when he painted on his face with his ShodoPhone. Takeru hide his feelings more, Jayden smiles more, especially when Antonio appeared, he seemed more than thrilled about that. Takeru has a legitimate reason to leave when Karou arrives because he is not the true Shiba head but Jayden's reason to leave is because he won't distract the others, but he could still be part of the team in theory. It leaves a weak plot point but he does leave to defeat Deker, which he is able to do with the help of his friends. 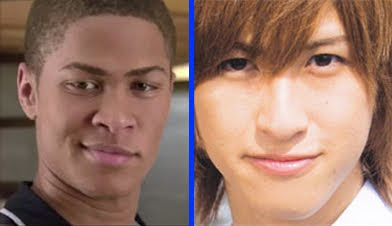 Kevin/Ryunosuke
Ryunosuke is a comical character as he takes his task way too seriously and often idolizes Takeru, but Takeru does trust him the most. Ryunosuke beats himself up when he defies Takeru. Kevin is by the books like Ryuunosuke and supposedly according to Mike, he is a stiff fellow, but he seems to have his own sense of humor. I feel like Ryunosuke is made fun of but Kevin not in such a over-the-top fashion but just ribbing on him from Mike. Kevin had to give up Olympic swimming while Ryunosuke gives up Kabuki, which Americans wouldn't get, and Kevin's black father does have people scratching their head about their Japanese background, Kevin could have easily been mixed. Anyway, Kevin is very stiff and comic in a subdued way (except when Mike puts a ballet skirt on him in one episode). 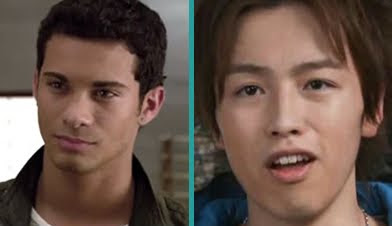 Mike/Chiaki
Both free-spirits, both fan favorites and both like video games. But Mike seems to be more of a gamer than Chiaki. Chiaki is more disrespectful towards Takeru AND Jii, drawing on them and such. Mike seems to 'straighten up' much quicker than Chiaki. Hector David Jr. definitely brings his own flavor to the character. I believe that Chiaki and Mike are different characters (more so of all of these here), even though they are similar. Mike is more of a dancer as Hector is a dancer. Chiaki's father appears in Shinkenger and shows more of why he is a cheery guy because his mom died when he was young and his dad wanted him to be more happy. But this is not explained with Mike. Mike and Emily's romance is more prominent in Power Rangers, even them holding hands and saying they are beginning a relationship by the final episode. Both Alex and Hector (the actors) addressed that they would had like their characters to have the same tense relationship Takeru and Chiaki had. 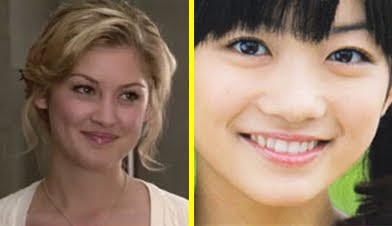 Emily/Kotoha
Both are sensitive, soft-spoken sweethearts that push themselves too much and play the flute, but I think Kotoha takes it to near-suicidal or sadistic levels. Also both had sick sisters that were supposed to be Rangers instead of them. Emily does more jokes and she is more child-like in her innocence and curiosities. Kotoha's modesty seem to come out more for me, as it is more of a Japanese trademark in Sentai characters. Emily on the other hand, becomes 'rougher' with a new 'personality' in "A strange case of the munchies' and 'whips' Bulk and Spike into shape. She also seems to have a tongue and cheek approach to Mike as she says "Mike has Kanji issues." 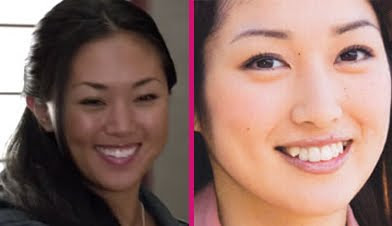 Mia/Mako
Mako is one of my favorite characters, she is strong, smart, and has keen-instincts. Mia and Mako both dream to be brides and are bad cooks. I don't like the 'bad cook' factor off both of Mia and Mako, because as a feminist, I don't like the counterpoint of women have to be good cooks and hence if they want to be a bride, they have to do the same. But since not all Pink Rangers express wanting to be brides, I forgive it... twice. I met Erika Fong, she is a nice girl but it's nothing against her. The writers did try to make her a strong character here and there but it doesn't quite work. They never bother to address Mia about her cooking, probably in order to pay it off with Lauren's love for it. But I did like how Mako gave up in cooking and throws her cooking book in the garbage. I would had liked that factor for Mia. They also added the factor of her and her brother, which was different in Shinkenger---Mako's parents wanted her to give up and go with them as her mother, a former Shinkenger, got injured. 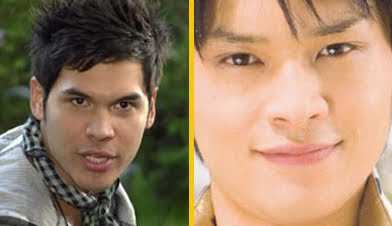 Antonio/Genta
Genta is often called 'happy-go-lucky' but I feel he is most best described as highly optimistic and passionate. Both dreams to show what they are made of and they are extremely loyal in the fact that they want to make good on a promise to their childhood buddies. Antonio mixes Spanish with English but since Steven Skyler isn't Hispanic, his accent seems lacking to me. It gets a bit hokey at the end. And later in the episodes of Power Rangers, Antonio is more of a comic relief. Genta is as well but I feel he was since he first showed up. And I blame the writers for making kids (mostly ages 4 to 7) think 'Golden' is a color. As I have said repeatedly, I am an Elementary School Teacher and kids that age tell me "Golden" is a color and love how Antonio says "Golden" a lot. 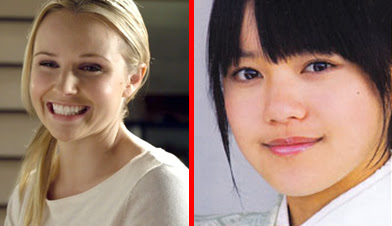 Lauren/Karou
Karou was known as the 'princess' and her fighting form is known as Hime (Princess) Shinken Red. She was meant to be a plot twist as she is the real head of the Shiba Clan, not Takeru. Lauren is Jayden's older sister and the true head of the Shiba Clan and true holder of the sealing symbol just like Karou. As Karou is harmed and gives the sealing disc to Takeru, Lauren gives Jayden a disc to activate his Shogun mode outside to defeat Xandred. Lauren is much more cheery but just as a strong and stern leader. She wants to be integrated in the team whereas they didn't cover that with Karou. Karou came with her own mentor and team but Lauren came alone. 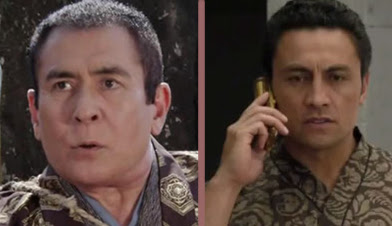 Jii (Hikoma Kusakabe) / Jii (Mentor)
"Jii" is a nickname the Shinkenger give Hikoma which means "Old man" or "Samurai." While Hikoma Kusakabe has a full name, Jii in Power Rangers Samurai has no full name nor much of a backstory. They also call him 'Mentor.' Both had to train their fake Red boys as their fathers were dead and they were basically the surrogate fathers of the Red Rangers. Hikoma has a day off that he visits his wife's grave and visits his daughter and granddaughter once a year. Both of them stay with their charges at the end. They both ride a motorcycle, both had problems with Green and Gold. Hikoma on the other hand encouraged Mako to learn to cook and in the Kamen Rider Decade teamup, Takeru cares for Hikoma to make sure he goes to the doctor. 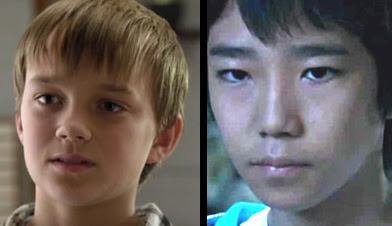 Cody and his father / Hiro and Toji
Hiro and Cody both have the ability to produce Modikara/Symbol Power and entrusted in guarding the Ushi Origami/Bullzord. Both try to control it but loose control of it and eventually with the help with the Red Ranger, they control it. The difference is that Cody has a father and Hiro has a grandfather, and Red accesses the Shogun Mode in PR and it doesn't exist in Shinkenger. Toji is Hiro's grandfather. As a result of the deaths of his son and daughter-in-law in a landslide to which he believes is the fault of the Ushi Origami, he has produced a Secret Disk that is designed to destroy it.

Posted by Lavender Ranger at 8:11 PM

I agree I'm not a big fan of the "Mia is a bad cook" gag, mostly because it was never clear what it was that made it bad. Was it burned? Too salty? What was she making that was so bad? Something fried? boiled? grilled? It seemed too vague to have any sort of effect.

Kevin was a character I had a the hardest time watching. Najee De-Tiege's reading of the dialogue is the one that felt the most "directly from the page". Thats an especially glaring when the episodes are largely copy and paste translations. I get that Kevin was supposed to be the "comedicly serious" type who serves as a foil for the others who had more loose and antic prone. However I can't use that as a reason to justify his stiffness when Rene Naufahu is playing that same type of role so much better.

While I could find Steven Skyler a bit irritating at times, I at least admired the liveliness of his performance, same with Alex Hartman and Hector David Jr.