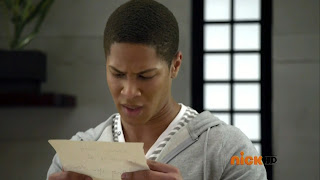 Summary:
Rangers are weaken on the ground. Antonio notices a chance to attack an unconscious Deker but hesistates, he tells his team and Mike says even he knows it was a good idea he didn't do it. Antonio feels bad and leaves. Deker is now awaken and washes himself in a small stream and thinks of Serrator's words. He walks on his own in the forest and have flashbacks to that night and find a place familiar. Dayu greets him and asks if he recognizes the place. She asks if he feels something, he says nothing and walk away. We are given another flashback of Serrator making him and Dayu into Nighlok. 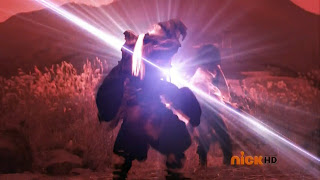 Mike walks into Kevin and shocks him. The Lightzord has a letter on it from Antonio. Jayden sends Mike and Kevin after Antonio as he went to go against Deker and he goes with the girls after Serrator as an alarm goes off. Bulk and Spike think of a way to plug in one of the holes of the line. They come up with a plan to plug it with all the gum they have. Deker bumps into Antonio and asks him why he didn't stop him when he had a chance. Antonio says he is there to stop him now. Red, Pink, Yellow and Lightzord fight Moogers Serrator set out at the weakest spot. Deker says to attack him because he is unarmed. Antonio kneels down and begs Deker not to do it, that millions will suffer. Deker says he is no samurai and is about to attack him when Kevin and Mike attack. Mike says Antonio is not weak, that his heart is the strongest compassion. Jayden goes super and Deker arrives. Deker attacks Serrator and says he only cares for his sword. Serrator screams. Deker closes his sword in the seath. All the purple energy leaves. Bulk and Spike roll the giant gumball into the geyser and plugs it. They both celebrate from above the gum but can't get unstuck. Deker trusts they will finish this, they morph and attack Serrator with Octo Disk Cannon and Bullzooka at the same time. Serrator grows. 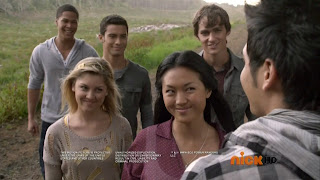 They fight off Paproyx and form the Gigazord. Serrator kicks balls at it. Red goes Shogun again. The Rangers couldn't defeat him so they call for Shark Zord and channeling the power of all the zords, they destroy Serrator. Dayu asks Deker if he has turned his back on the Nighlok. Deker says he will lift the curse on his own. The Rangers walk during a sunset, Antonio stops, Mia comes up to him. He says he thinks about Deker's choice. The gang tell Antonio he made a good choice too. 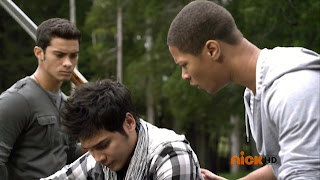 Episode Review:
Even though fans have criticized that Samurai is so much like Shinkenger, joke that it is just a translation other than an adaption, I commend Saban to let even the darkest story points in like Deker daring Antonio to attack him unarmed and calling him no samurai. I also like that Serrator's plot line has been condensed because in Shinkenger, it is too drawn out. And there is a whole subplot about the souls in Uramasa that is not here in PRS and I am glad, it makes it too messy and sordid. I am disappointed that Yellow or Green doesn't get to use their Shogun Mode and there is so much of Red in Shogun Mode.
﻿
Posted by Lavender Ranger at 7:19 PM