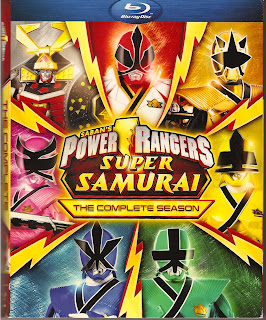 First of all, thank you to Saban Brands and Lionsgate for the complete season of Power Rangers Super Samurai Blu-Ray 3 disc set. Second of all, most likely fellow Power Force member Fury Diamond of Rangercrew Blog will be reviewing this and posting up the menus but I decided to give it a try as I usually review all the DVDs I ever get (on Spanengrish Ramblings). 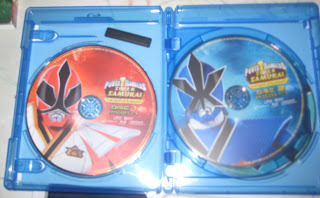 The box shelve and case itself have the same graphics. As with all Lionsgate DVDs, the previews come up and you can't skip it with 'Menu.' You have to press 'forward' to skip the previews. The DVD menus are exactly the same. It would had been nice if Lauren appeared in the menu for the last disc but oh well. When you wait, a lightning bolt appears and it loads, changing red  to yellow. This set does not include Trickster Treat nor Stuck on Christmas.
Disc One: 1. Super Samurai 2. Shell Game 3 Trading Places 4 Something Fishy 5 The Rescue 6 The Bullzord
Disc Two: 7 He Ain't Heavy Metal, He's My Brother 8 Kevin's Choice 9 Runaway Spike 10 The Strange Case of the Munchies 11 A Sticky Situation 12 Trust Me 13 The Master Returns
Disc Three:  14 A Crack In The World 15 Stroke Of Fate 16 Fight Fire With Fire 17 The Great Duel  18 Evil Reborn 19 The Sealing Symbol 20 Samurai Forever
Extras? Not much, just stuff from Power Rangers YouTube like: Train like A Ranger shorts, Ranger Swarm from Licensing Expo 2011, and the Music Video from "He ain't Heavy Metal, he's my brother." I would have liked some interviews from Kimberely Crossman (Lauren) and the others. 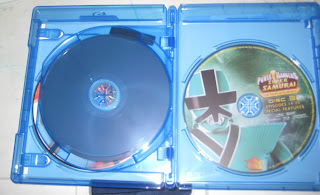 I can't post screen captures because I am guessing the rules are the same to Lionsgate as Shout! Factory, I am not sure. Anyway, the season itself I felt it was the same as the first but they did take more liberties this time. Bulk and Skull did actually get involved this time, but by the end, not enough. They get mixed in with the Samurai Rangers in "Runaway Spike," "A Strange Case of the Munchies" and "Stroke of Fate" where they make a giant gumball. I wish they did have some episodes of flashbacks and backstory on Bulk and Skull because lots of younger fans had no idea who they were. Kids have told me they don't like Bulk and Spike. 50 episodes, 1 movie, 1 teamup special and one sequel special have been reduced into 43 episodes and things don't seem so rushed like the Disney Seasons here in these 20 episodes. Check out my episode reviews. 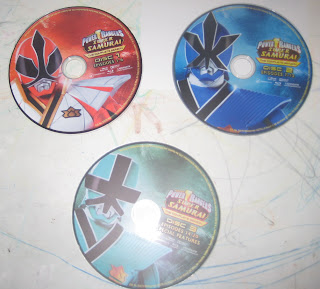 Older fans have their problems with Power Rangers Samurai and Power Rangers Super Samurai being too much like its Japanese counterpart Samurai Sentai Shinkenger. In the defense of the creators, the show is targeted to children in the United States who have NEVER seen Super Sentai, part of the reason that Power Rangers EVEN exists. The reason I put those words in capital letters is because too many adult fans complain about this fact and they fail to realize this point. I mean, it would be nice if the writers were creative and made their own storylines and Power Rangers was unique to Super Sentai. But Elie Dekel of Saban Brands personally told me that he was surprised we fans knew about Sentai and knew things before they did. 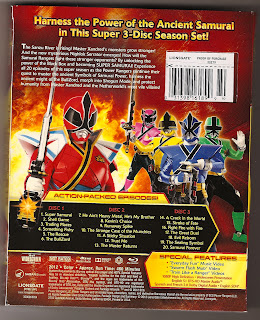 Also Jonathan Tzachor probably decided to follow Shinkenger because Shinkenger was such a great series and wonderfully written. Given that lots of fans initially thought Disney dropped out of Power Rangers thinking that Shinkenger was quote "Unadaptable" because of its Japanese theme and background. But PRS and PRSS proves it can be done. I don't think most fans even imagine that the Samurai theme would be around for TWO years. Now fans can also argue that the writing and acting play into the 'blandness' of these two seasons but I honestly think it was a modest attempt. Kids really like it and understand it, keeping track of all the names and plots. Most kids I talk to are more into the action than the comedy. And Saban Brands keep talking about the "DNA of Power Rangers" but they forget two stables of the franchise: last names for the Power Rangers (we only got 4 out of 7) and the name of the city they live in. It looks like they live on an island. I will be covering more on the pros and cons of Power Rangers Samurai later this week.
Posted by Lavender Ranger at 2:57 PM