SPOILERS
Thanks to Lionsgate and Saban Brands, I have the last episode before it airs on Nick in the US. Also, you can view it on Netflix. Pics thanks to Samuraicast.com as always. 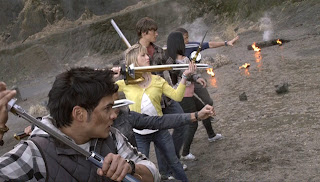 Summary:
A recap of the last moments of the last episode are shown before the theme song. Picking up from the last episode, the six Rangers are on the ground and unmorphed, damaged and all. They still summon the courage to fight the Moogers, not being morphed. Lauren meanwhile works on yet another disk and she uses up all her energy into it and faint. 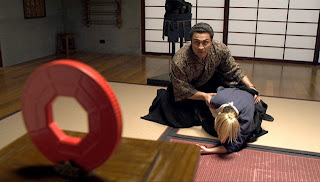 It is all her power and it can only be used once. Mentor arrives on his bike to the site. Mike tells Jii he has to teach him how to ride his motorcycle. Jii says that scares him more than any Nighlok. Jii gives him two discs, one disc is from his father, said to double his power. Xandred walks into an area of destruction, just like the one they usually do for Sentai but looks oddly organized for a set of destruction. The Rangers race in to fight the Moogers. The Rangers morph. 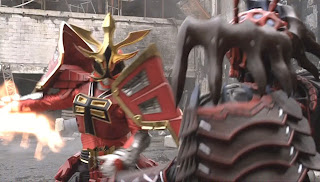 The Rangers capture Xandred with symbol power and Jayden uses the Double disc to create two Fire Smashers and fights Xandred. Xandred knocks him down. Blue uses the fire disc and weakens him. Then Jayden uses Lauren's fire Disc to summon Shogun Mode outside of the Megazord. He keeps hitting the weak spot of Xandred and destroys him. He used the Mega Blade and not the Shogun Spear. Xandred grows big and the team forms Gigazord. 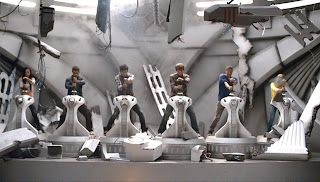 Jayden decides to de-morph and concentrate their Symbol Power into a  big attack and got close enough to Xandred. They use the Spin Swords and Barcuda Blade and go forward, they loose zords and become Battlewing Megazord but Xandred makes them just the main Megazord. The cockpit is almost destroyed, all in pieces. Jayden says it has been a honor. They strike Xandred, he says the Nighlok will rise again, the river retreats back to the Netherland and Octoroo drowns into the river with the ship. Jii looks for the gang. They arise from debris. 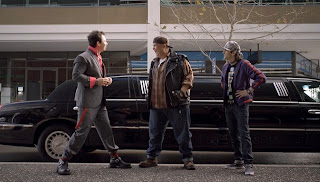 Jii congragulates them and they do the "Samurai Forever" spiel. Bulk and Spike are happy the Samurai Rangers saved the day. Now it is time to say goodbye for some reason. A limo arrives, Spike admires it. Bulk ties his shoe and falls and greet Skull. Skull says Bulk is old. Spike and Skull chew gum and say hi. They climb in the limo and say goodbye to 'Bulkie' from the sky window thingy and bump their heads with a clearance stick. Back at the Shiba house, Lauren's outfit looks like a stewardess from the 70's. She says goodbye to Jayden, she says she is bad to goodbyes and hellos. She leaves and the others come to Jayden. Antonio will go exotic fishing, Mia will go to Culinary school (finally), Kevin is going to train for the Olympic qualifying tournament and Emily and Mike are going to Emily's sisters. They hold hands. They go out and say goodbye to Jii. Jayden is free and doesn't know what he will do. Jii gives Jayden a red electric guitar. Samurai forever. 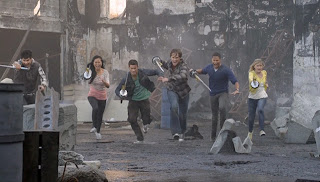 Review:
Favorite quotes? Jayden asks, "You guys can stand up right?" "I was just taking a siesta," Antonio says. Also... "I am going to Culinary academy." Mia says. "Thank you," Mike says. "No comments," Mia says. "I didn't say anything," Mike says. "Well, I can take a hint," Mia says. No you can't! If you did, you would stop cooking already. As for Bulk and Skull, I am touched he is just in one episode and the final one but I am sure fans wanted a whole episode. The series didn't delve much into their backstory and I kinda wish they did because lots of kids I talk to are confused as to who they are. A whole 2nd grade class tells me they hate Bulk and Spike, that they are annoying and boring. I still have to review "Trickster Treat" and "Stuck on Christmas." "Stuck on Christmas" airs Saturday December 15th at 1PM Eastern and Pacific,
﻿
Posted by Lavender Ranger at 7:51 PM