I thought this would be an interesting subject but I didn't know if I had enough to back it up. The Subject being how differently one costume can be seen culturally when displayed in two different ways.

Kibaranger, the name of the original White Ranger in Gosei Sentai Dairanger, was a child hero. Even though the Ranger is meant to be a tall adult---his weapon Byakkoshinken spoke for him to conceal his identity but the suit actor was indeed shorter than the other suit actors. While when it came to the White Ranger, he was the epitome of power, an award to Tommy for all he suffered as the Green Ranger. 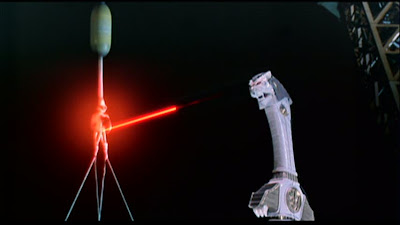 I read somewhere on a website that a fan hated Saba and didn't get the purpose of Saba's existence. The reason he spoke was because from the footage, the weapon spoke. In Dairanger, Byakkoshinken spoke for Kou like I mentioned before and he advised him and was like 'don't do that.' and he had powers. He could make the sky dark and lighting, he would fly and levitate and had telekensis. Sometimes he would go to the leader of the Dairanger about his concerns. One time Kou wrapped his mouth with a cloth. In Power Rangers, Saba was meant to advise Tommy but in the end, he really didn't and his speaking slowly stopped. In "A Ranger Catastrophe Part 2," the last time he would speak was when he said "White Ranger, I'm afraid I've failed you. I can see no way out of our present situation." In the movie he briefly appeared and didn't speak. 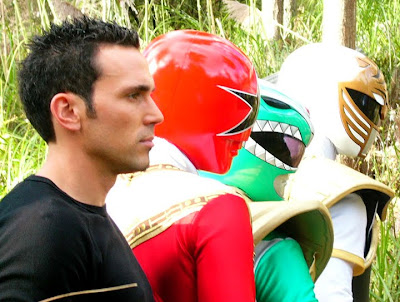 Much like the Green Ranger's floppy shield, Tommy as the White Ranger had what looked like arm bands. But in truth, they are like shirt sleeve cuff, like the rest of the Dairanger. The American Saban people made the bands on the arms, but when the White Ranger appeared again in Dino Thunder, he had the sleeve cuffs like Kibaranger, mainly because they got the suit from Japan. 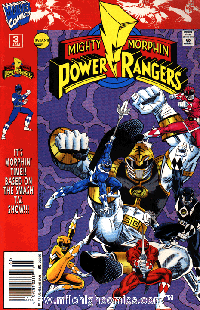 I think it is interesting that in Japan the costume was seen as a little kid (the vest look childish) but for the White Ranger, the vest was a symbol of power, calling back the Green Ranger shield. Tommy had to be the leader (by default since Jason's actor was fired and written out of the story), a commanding force and the costume looked really cool and strong. Maybe fans that grew up with the White Ranger won't agree me about the vest looking childish because of their perspective. For me, just exclusively me, I was 11 when the show started and I have seen the entire Dairanger series multiple times and that's how I see it, maybe I'm alone on this one.

Posted by Lavender Ranger at 12:36 PM

Well growing up with PRs obviously my opinion is biased as well. The white ranger just feels odd being shorter than the other dairangers, I can't think of a kid with ranger powers, its just too silly seeing a kid grow into his suit but kibaranger still grew into his suit just he remained smaller than the rest. IMO The Kiba ranger suit definitely would look better with the other dairanger suits if he wasn't a kid.

Well, I guess it depends on your perspective and who the character was. Since Kibiranger was a kid, his costume may seem childish. But since Tommy was older, it seems more powerful. That's my theory.

I think one of the reasons the vest may look childish on a small person is that it somewhat invokes the look of a Japanese school uniform, don't you think? With the dark color and the line down the middle.

Americans don't have that frame of reference at all, and even if we did, I don't think the connection would be as easily made with the appearance of a large, leading-looking American actor in the suit.

For me, the Kibranger suit gave me a sense of Kou's character.

For Tommy, the suit just reminded me of how annoying he was as the White Ranger. :P