In MMPR 1993 toy line, fans found three bikes with the male Rangers and sidecars (not including the females) but they never seemed to appear on the show...

Until the background of episode "Calamity Kimberly" and appeared in one episode or another. That is because they existed in Zyuranger, as I have mentioned before. 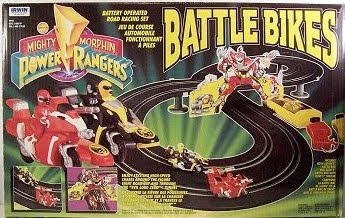 Even the Battle Bikes were not properly introduced on the show, they continued to appear in coloring books, and other merchandise. Including this Battle Bikes race track toy that featured Lord Zedd so I am thinking it came out in either 1994 or 1995. 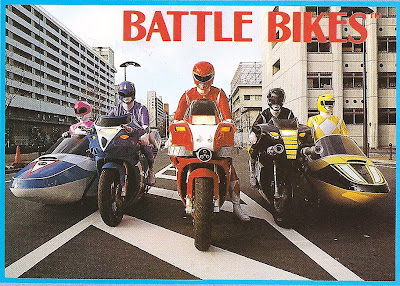 In Mighty Morphin Power Rangers book Vol. 2 The Zords vs. The Monster Squad, the Battle Bikes appeared. This was the only instance of live-action appearance of Battle Bikes called as such in Power Ranger merchandise. In Zyuranger, most of the footage of the Zyuranger using them was out of costume, so the producers couldn't use the footage. And probably the reason they didn't make their own bikes so because of costs. But they did have the money by Season 3, hence creating the Shark Bikes. 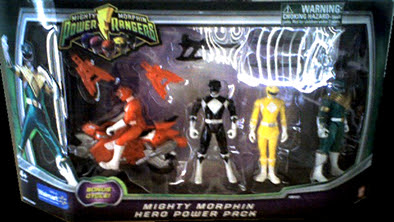 Recently in the 2010 batch of MMPR toys, the red battle bike appears in this power pack set.

What interested me even more than the Battle Bikes in Power Rangers are the unused weaponry in Japanese tokusatsu.

I remember reading in one Super Sentai guidebook that the Zyuranger's bikes (the Zaurer Machines) could be combined together to form a finishing attack, which they never actually do on the show. Moreover, Burai could've also perform the Babel Attack with the Zyurangers as well according to the back packaging of the Hikaru Chogokin Dragon Ranger figure.

I think Metalder was also supposed to use a sword at one point.

I rememeber the rangers using the bike in the first few eps. It was the fisrt and last time they use it.

Nice post.I remember reading in one Super Sentai guidebook that the Zyuranger's bikes could be combined together to form a finishing attack, which they never actually do on the show. thanks for sharing here..
Sports Good