UPDATED 1/5/11 8AM EST
Even though Power Rangers is notorious for re-using props, Toei have done a good job of at least not repeat using monsters for other series. Both some props have turned up here and there.

In Carranger (1996), in this scene from episode 22, Signalman remembers how it was when he was a kid in school, to his left you can see a child dressed with the head of the Haniwa Ventriloquist from Dairanger (1992). 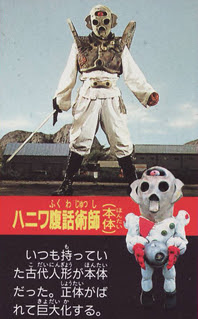 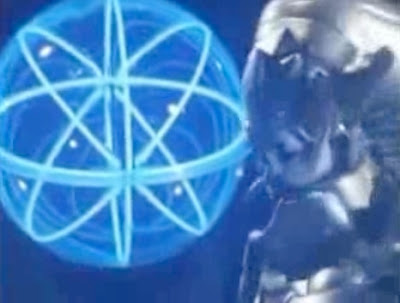 The Blue sphere was used in Jetman in the Vyram lair, maybe it was the first time used. Not sure.

I totally forgot, it was in Bandora/Rita's palace! 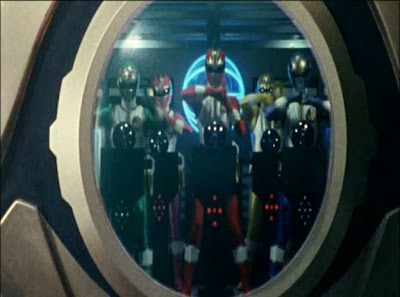 Reused in the background of the Dairanger cockpit. Thanks for the reminder!

In 1999 GoGoV/Lightspeed Rescue, it was in the 'skull castle.' Here it is in the right bottom corner. It seems that in Power Rangers, it was only seen three times.

In 2002 Hurricanger, in Chuzubo's lair, you could see it just laying around. Here is in the top middle, glowing it's aqua blue color. Never seen in Ninja Storm. This is the only prop I see constantly used in Super Sentai. 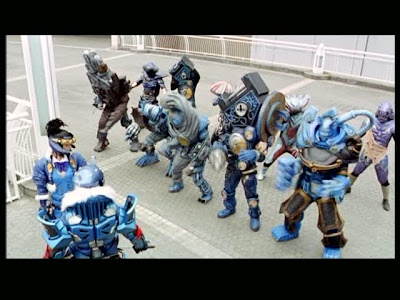 But in a rare event, monsters were indeed reused. In Boukenger Movie: The Greatest Precious, Gekkou conjured monsters for Dark Shadow. The first five in the row were actual monsters from the show: (left to right) Takumigami, Kanadegami, Nendogami, Jougami and Kawazugami. Both in the back are recycled monsters from past series, I don't think they actually fought the Boukenger, it was only for this scene. 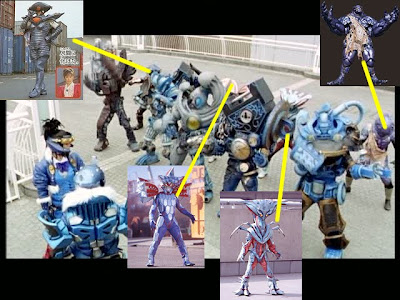 In the background, left to right: A simplified Rogue (san boobs) from Timeranger (Thanks Mr. Nurgle!), a simplified and smaller version of Jougami, DonMoyaida and Kasasu from Dekaranger and a simplified Troll from Magiranger. All the monsters are blue. 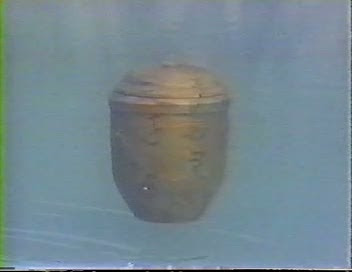 Bandora's imprisonment/container of golden leg
In the picture above is the space dumpster, which was a recreation of Bandora's bin and it was recreated once again in Operation Overdrive for Thrax. Anyhoo, I think the bin was like the one to the right --which was used for the birdcage vagabond in Dairanger. 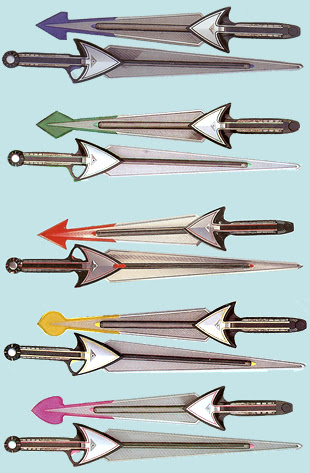 Also the Spark Vectors from Timeranger were used as weapons for the Igarods in Dekaranger, I don't have a picture.

I know there are more reused props out there but I can't remember any others. Let me know! 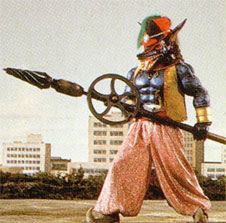 Super Sentai Fan tells me that Dora Jin of Zyuranger was in Kakuranger... 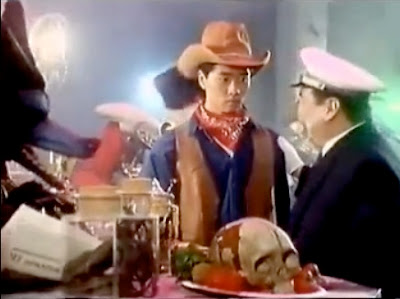 Briefly in a scene in Episode 3 of Kakuranger as a bartender in a monster bar. 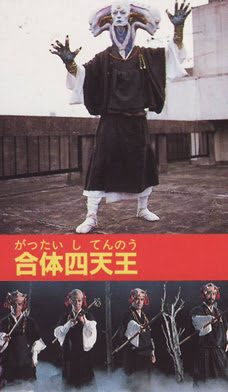 Gattai Shintenou of Dairanger was reused in Kakuranger as well... 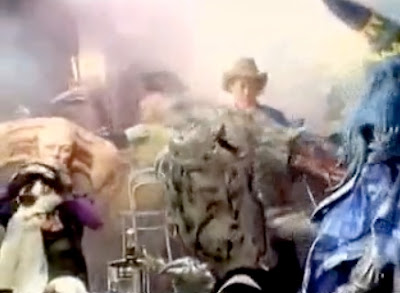 Re-painted in a human skin color. 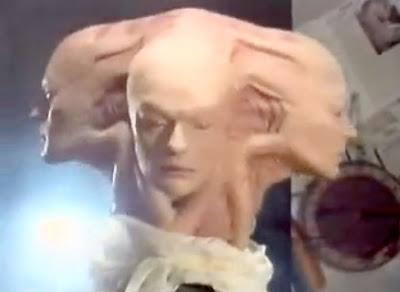 I think the mystery monster is a repainted Rouge from Timeranger.

Also, the blue sphere was in the cockpit for the Dairenoh in Dairanger.

The blue sphere was in Bandora's Palace in Zyuranger.

Well, there is inpressive the the blue sphere, the bins and monsters, only utilize in the Super Sentai in 1990s to 2000s and Power Rangers series, too...

Thanks to you all!

Two of the villains from the Super Sentai World special, General Bango and General Damaru, re-used the heads from two of the Gingamen from Fiveman. Bango had the floppy green head and Damaru had the one-eyed skull head.

The Blue Sphere Was Also In Megaranger

Megaranger, which episode and for what?

Toei is allowed to cut back once in a while. They managed to make new monsters for every episode (minus two parters) with mostly brand new mecha/monster fight, all while making them still fun to watch. A little reuse never hurt and the few monsters reused (considering that each series brings 50 new ones) were never main ones again. I say "Toei, you deserve a little reuse".

The Blue Sphere was also in Kakuranger episode 12 at around the 02:13 mark.