All right, all right, I know I talk too much about this movie, but it is the 15 anniversary for god's sake! Can you believe it has been 15 years since this movie was released? Anyhoo, lot of fans ask why the Rangers had different weapons in the movie, but it goes along with where is Squatt and Baboo? And also, why do they have shiny suits? I just think since it is non-canon, just go with it, also they look cool. 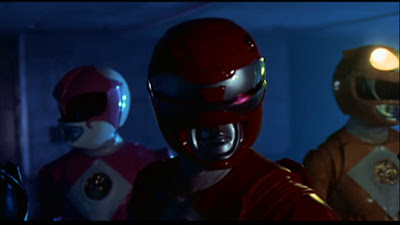 "Power Scope"
Rocky calls this out and his helmet changed into this VR Trooper-esque version (which I haven't yet seen any cosplay attempt to replicate) and can track the Oozemen. 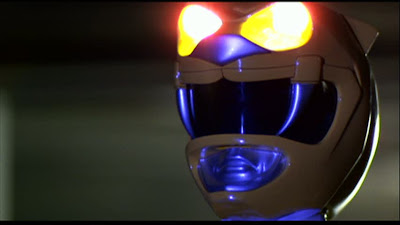 "Power Beams"
Tommy asks for some lights and Aisha activates this. I thought this was so cool when I first saw it and it is still cool! 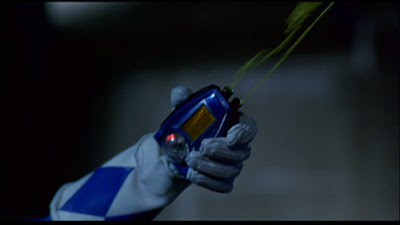 Stegastinger
Originally supposed to be the weapon of the Black Ranger in the early draft of the script (Billy was to have Audio Enhancers in his helmet). When I first heard it, I was like 'Billy is the Triceratops, not a Stegosaurus.' I remember one time on a local show in Miami, Lauren Delisa interviewed this spokesperson dude at a convention and he was with four of the Power Rangers (during season 2, without Yellow), and he said Black was the Stegosaurus. I was like, 'Are you blind?! Can't you see the tusks and ears on the helmet?!' He probably thought since Red, Blue and Pink were Dinosaurs, so were the others. Anyway, I digress, the weapon doesn't even look at all to be related to a Stegosaurus. 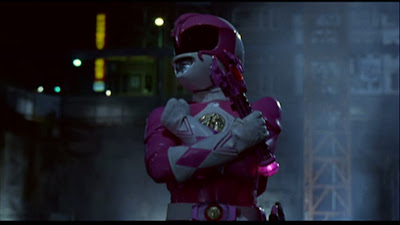 Pterodactyl Thunderwhip
Kimberly would release a lizard-tongue-like whip out of this weapon. I like its design and like the glowy pink light on the bottom. It might just like a Baton, but it had a lot of potential. Black had no weapon in the actual movie and Tommy had Saba. In the early draft of the script, it was going to be called the Raptor Ribbon. It seems they wanted to add more Dinosaur names. Speaking about Ribbons... 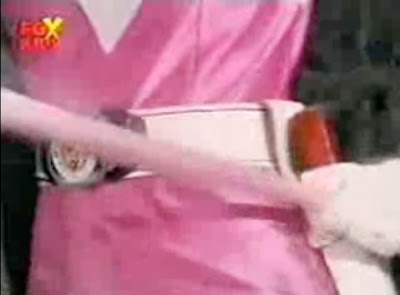 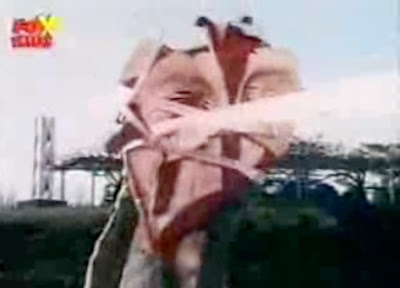 Maybe it was inspired by this Ribbon. In the episode "Bloom of Doom" which had footage provided by Toei but didn't appear in Zyuranger (now dubbed by fans as Zyu2), Kimberly takes out a string of pink ribbon that she wraps around the foe and electrocutes the beast with. We never see this weapon ever again!
Posted by Lavender Ranger at 11:19 PM

Well, it atleast would have been cool is Black was a Stegosaurus and Yellow maybe a Raptor. For a true all Archosaur Team! ( Archosaur, because Pteranodons are not Dinosaurs but Perosaurs. Both Dinosaurs and Pterosaurs are Archosaurs, which translates into "Ruling Lizards" Dragon Ceasar/Dragonzord can be seen as Godzilla, who in turn is considered a Dinosaur ) Because you know Dinosauirs >> Megafauna

I always loved the movie and liked all the extra weapons they showed. I always hoped they'd change to the movie suits in the show and use the weapons used in it.

I dont mind all the movie talk at all... I am a renewed power ranger ran, and finding all these blogs and all, its been interesting to hear all the different takes on the movie, especially the uniform change and the thought process behind the team losing the dark visors and mouthpieces on the helmet (which thank god didnt happen!) So any more information you can post up about the movie, I say the better! Keep up the good work... would love to read/hear/see more interesting tidbits about this peice of power rangers history, especially it being the 15 year anniversary.