Power Rangers Turbo (1997) / Gekisou (Car Racing) Sentai Car Ranger (1996)
There was a second motion picture called Turbo: A Power Rangers Movie. They gained the most unpopular Ranger ever, Justin, a 11-year old. After the movie, the regular Power Rangers graduated and switched to younger teens mid-way through the season. Carranger were employees are a car-repair garage given powers by an alien, it was parody/homage to Sentai hence the extra-goofy monsters.

Tommy / Kyousuke (Red Racer) / T.J.
Kyousuke was stubborn and sometimes selfish, obliged to be butt of jokes. Tommy was just a standard leader and T.J. took the torch, he was humble and friendly. T.J. was the first African-American leader, to be followed by Jack (2005) on S.P.D..

Katherine/Yoko (Pink Racer)/Cassie
Yoko loved eating many kinds of foods and once struggled with loosing weight. When she couldn't, she blamed a monster that was not responsible. Katherine, on the meanwhile did worry about weight, but was effected by a monster, becoming light as a feather. She was the same sweet and caring Ranger. Cassie was gutsy and somewhat rebellious.

Adam/Minoru (Green Racer)/Carlos
Minoru was a goofy businessman, in charge of the accounts at the garage. He once accidentally mailed a deadly weapon to a grandmother. He was nothing like his American counterparts. Adam was the great fighter he always was, but a bit more adventurous and confident than before. Carlos on the other hand, was a bit self-centered until Adam had him turn around, but still remained a bit ignorant.

Tanya/Natsumi (Yellow Racer)/Ashley
Natsumi was the chief car repairer, she could fix anything with her lucky wrench she got from an auto mechanic she admired as a child. She could always fix anything since she was young and was made fun for being a tomboy. Tanya was a bit tough but always caring. Ashley was a former cheerleader, but not as annoying, cheery but realistic... well as much as you can be on PR. 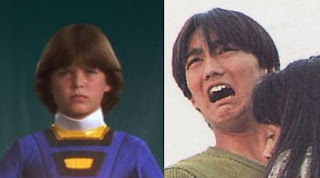 Justin/Naoki (Blue Racer)
Naoki was the designer, mostly kept to himself, didn't want to be involved in schnanagans. He was awfully shy, especially when it came to women, he would freak at their touch. Justin, the most hated Ranger ever (think Anakin in Phantom Menace), was just a kid, precocious and curious, he also had a strong sense of what was right. 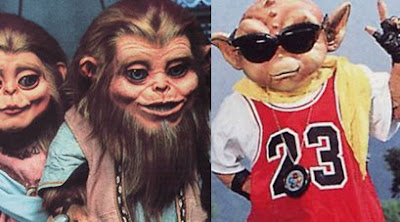 Lerigot / Dappu
Lerigot first appeared in the movie and no one like him but not as much as they hated Justin. One movie critic said his voice sounds like a pigeon. He had a wife and son. Many wondered where he came from, well, his inspiration came from Dappu, the alien from Carranger who made the Carranger with his 'car-magic.' Dappu first wore a brown robe but then a basketball jersey and sunglasses, after being made naked by a monster who took people's clothes. Dappu was the only 'mentor,' while Lerigot wasn't the main mentor, the main mentor was Dimitria, who was an original creation. 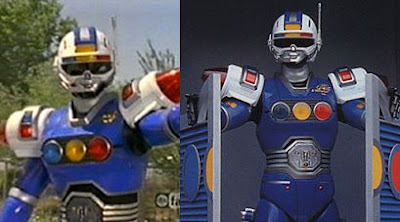 Blue Senturion / Signalman
Blue Senturion was a space cop, a robot who was then controled by evil for a ep or two, same happened to Signalman who was the planet Police. Signalman was the one with a family, maybe it is what inspired Lerigot's family. Signalman became home sick and went back home for a while. He had a command post on Earth, while I suppose the Blue Senturion stayed in the Power Chamber. He came from the future with a message that all the baddies would team up. He was last seen fighting evil forces in the season finale (Countdown to Destruction) of Power Rangers in Space. 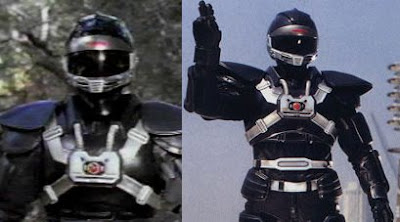 Phantom Ranger / VRV Master
The Phatom Ranger was a mysterious Ranger that could become invisible. VRV Master wasn't a Ranger at all, he was an ally. Both brought in the new zords. He was mysterious too. But it was later revealed he was Dappu's father but we never saw him without his helmet. Dappu once had a dream where he saw his parents and they looked like him, but VRV Master is clearly taller and skinner than Dappu. Oh well. The Phantom Ranger's true identity was never seen or revealed. It was rumored that he was Zordon's son Shadow and that his identity would have been revealed in a third part to Countdown to Destruction, but because of budgetry reasons, it never occurred. It could be plausible that Phantom Ranger was Zordon's son as he came from Eltar, his home planet.

Posted by Lavender Ranger at 7:33 PM