Power Rangers Time Force (2001) / Mirai (Future) Sentai Time Ranger (2000)
Same storyline, team from 3000 traveled to our time to stop criminals. There they met a direct ancestor of their leader. 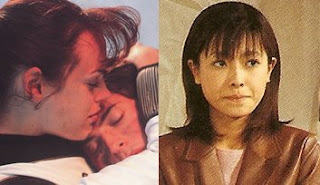 Jen / Yuuri (Time Pink)
Jen and Yuuri were pretty similar. Yurri was a hard-as-nails and rarely smiled and took her mission seriously. Jen was also a stern leader, but did so a bit more emotion, it probably was a cultural thing. Major difference was Yuuri's damage was that a criminal killed her entire family. Jen's fiance Alex was seemingly killed and then when she went to our time, she met Wes which was Alex's ancestor and exact double. 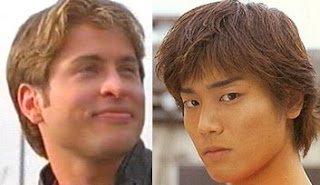 Wes / Tatsuya (Time Red)
Wes and Tatsuya were both sons to rich strict fathers and they were both free-spirited, wanted to conduct their own future. Wes was bit more wild-streaked, probably just cultural differences. They both had romantic involvements with the Pink warriors. They never got to kiss them. 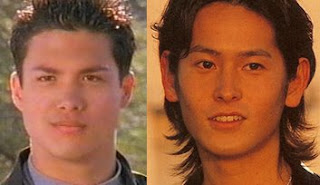 Lucas / Ayase (TimeBlue)
Ayase and Lucas were both serious and quiet race car drivers. The big difference was that Ayase was much more serious and he criticizes Tatsuya all the time. He also fought with Domon. Ayase was cocky, sarcastic and ballsy. He hides a secret, that he has a terminal illness and will die soon. After time was altered at the end of the series, a cure for Osiris Syndrome was found and Ayase was cured. Lucas ended up dating one of the former villains Nadria. 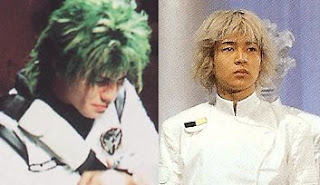 Trip / Sion (TimeGreen)
Trip and Sion were both aliens from outer space planets with funny-looking hair and the tech experts. Major difference was that Sion simply dyed his hair and was an orphan from his planet Hummard (Kal El situation). Trip's hair was actually green and he had a crystal on his head. He was from the planet Xybria, his people had precognitive and other psychic abilities. Sion was much more child-like and innocent, due to his alien physiology, Sion only needs to sleep once per year, but it takes him a week of hibernation when he does it. However, Trip was treated more like the nerdy awkward one. 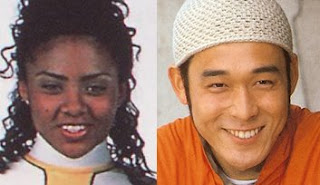 Katie / Domon (TimeYellow)
Both are very very different, other than gender. Their only similarity was that they were both strong. Although, Katie was abnormally strong, due to genetic engineering. Domon was a girl-crazy erratic former pro-fighter. He fell in love with a reporter and she bore his child at the end of the series. Katie is bubbly and loves hugs. 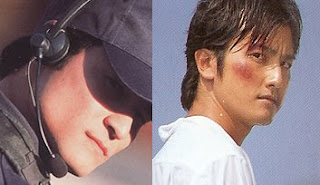 Eric (Quantum Ranger) / Naoto (Time Fire)
Eric and Naoto were very similar in the respect that they had pasts with the Red one (Tatsuya and Wes). While the latter wanted to be friends, Eric/Naoto wouldn't have it. They both had selfish motives and wanted to be on top. They both wanted to kill the enemies, as those were merely escaped prisoners, not really monsters. Only differences were cultural and acting changes, also Naoto died trying to save a little girl from the enemy. Eric went on to partner up with Eric. 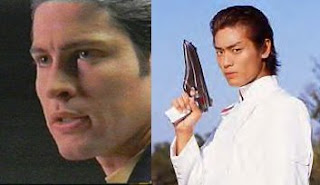 Alex / Ryuuya
Both series had two characters in the year 3000 that were the descendants of the red warriors the team met in 'our time' (2000/2001). Major differences was their alliances and how they were treated. We never officially met Ryuuya in the beginning, we just saw him. Villainess Lila took his image and randomly picked the Timeranger. Later on, the real Ryuuya came and took the place of TimeRed, took them back to the future, and tried to erase their memories. Alex proposed to Jen and then was seemingly killed by the main villain Ransik. His persona later changed with no explanation and no longer wanted to marry Jen but did assist them by sending them Time Shadow, Eric's battle armor and healing Wes' father. Both Ryuuya and Alex were stern then on.

Posted by Lavender Ranger at 11:22 PM

it was very cool that the pink ranger was the leader!!!