The Future of the Power Rangers Part 2 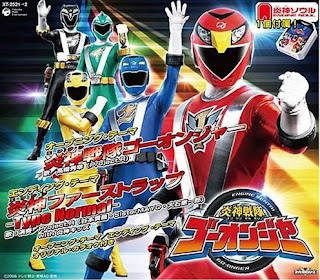 One of my reliable sources says Disney is ditching the animated idea and sticking with live-action and everything is back to normal... for now. According to some rumors and circulation and one source being one of the reliable rumor fans 'poweranimals' (whose real name is Matt) that the next series will be called "Power Rangers R.P.M.," based on the previously blasted-upon by fans series "Engine Sentai Go-Onger." For now, it is a tentative name and fans so far like that it doesn't include the word 'force' in it as three series already have that name ("Time Force," "Wild Force," and "Mystic Force.") By the by, "Operation Overdrive" was almost "Drive Force." Like I said before, we won't know for sure until June in the Licensing Fair when Disney reveals it. Also, my reliable source says the series will be leaving New Zealand and moving to Canada, supposedly cheaper. But that will probably won't have the cool connections that currently have with Japan, footage for opening sequences were shot for two sentai shows in New Zealand. Costumes, props, and even sets have been moved easier since Japan and New Zealand are so close together.
The G.K.A. Times

Related: The Future of the Power Rangers
Posted by Lavender Ranger at 9:04 PM