Power Rangers Lost Galaxy [1999] / Seijyu Sentai Gingaman (Star-Beast Team Milky Way Man) [1998]
In Power Rangers Lost Galaxy, we started with a new team which would continue every year such as Super Sentai. Power Rangers in Space was the last team that would gain whole-new powers. Supposedly 'not so distant future,' there is a space colony from Earth that headed to a new world. Three soldiers, a brother and a mechanic landed on a strange planet (Mirinoi) and picked out legendary swords with one native and became Power Rangers. They swore to protect Terra Venture, the space colony. They later entered the 'Lost Galaxy.'

As for Gingaman, it was much much different. But curiously the characters and some of the storyline was similar. The whole team was of a special magical land hidden in the Earth that (yes) pulled out swords out of stone and became the Gingaman. They wore tribal outfits, road horses and never traveled the galaxy. 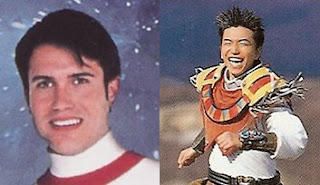 Leo / Ryoma (Ginga Red)
Ryoma doubted his own responsibility and was kinda childish, more fun-loving than anything. Leo was much more rule-breaking, he snuck aboard Terra Venture and accidentally got everyone to Mirinoi. They both had a lot to learn and both dealt with their brother's supposed deaths. Both older brothers were more responsible and respected and fell down a chasm. 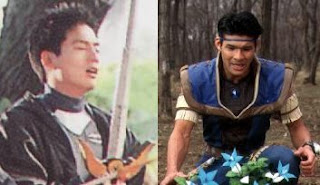 Kai / Gouki (Ginga Blue)
Gouki was a nature-loving shy big lug, while Kai was a stuck-up know-it-all. He conflicted a lot with Leo. They differed in confidence. 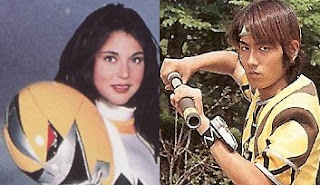 Maya / Hikaru (GingaYellow)
Other than obvious differences, Hikaru was much more playful and risky. Maya on the other side was nature/tofu girl. She loved nature and spoke to their Galactabeasts, while the Gingaman spoke to all the Gingabeasts. 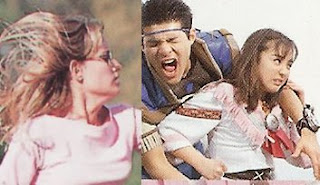 Kendrix / Saya (GingaPink)
Saya was basically the girl of the group, while Kendrix was the 'Billy' of the group. Intelligent, techno-savy, caring, and a bit flirty. Because the actress playing Kendrix fell ill at the time (leukemia), she was temporarily replaced and came back at the season's end. Kendrix was the first Ranger to ever die, she came back though, but technically she did die. 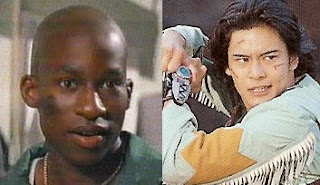 Damon /Hayate (GingaGreen)
Damon was a spaceship mechanic and strangely was used as a 'decoy' at times. He was strong and brave. Hayate fought with the villianess of the series on a regular basis and mourned his girlfriend. The villianess made a copy of his girlfriend to tease ad kill him. 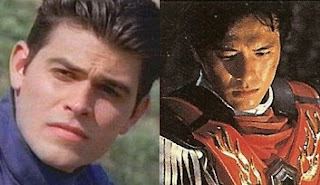 Mike (Magna Defender) / Hyuuga (BullBlack)
Both Mike and Hyuuga were respected and responsible guys who were meant to the leader and then fell into chasms made by a foe. They were both believed to be dead and their little brothers were forced to become the leaders and they doubted their leadership. They later came back, taking the powers of a warrior who took their life force temporarily. Differences were just cultural things and acting. 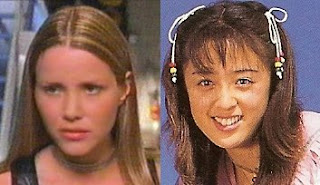 Karone / Saya
Karone came in when Kendrix died, she was formerly Astromena of Power Rangers In Space. She always wanted to be a Power Ranger and when the opportunity came, she wanted to redeem herself. In one episode, she had to face a warrior she turned to stone and face her own evil self to gain a Battlizer for Leo. Very different from sweet Saya.

Posted by Lavender Ranger at 9:45 PM