In a secret ninja academy, students were trained to be ninjas. Aliens attacked and took their students, leaving three from one school and two from another to fight evil. Major difference between both is that in Hurricanger, the students were killed and in Ninja Storm, they were captured and in the last episode, they were saved. 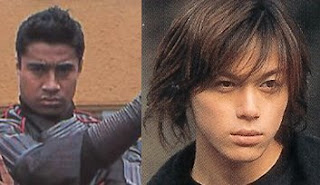 Shane Clarke (Red Wind Ranger) / Yousuke Shiina (Hurricane Red)
The Hurricangers were actually the principal three, they were of the Wind Academy, hence the Power Rangers being the 'wind rangers.' Yousuke was a young go-getter, he really went to great lengths to get Ikkou on his side and to be his friend. Shane on the other hand, was laid-back. Neither liked training but when trouble came around, they stepped up. Shane was also a skater. 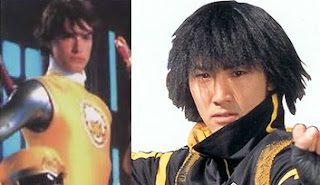 Dustin Brooks (Yellow Wind Ranger) / Kouta Bitou (Hurricane Yellow)
Kouta was a strong, yet nice and gentle guy. Dustin was the 'fan boy,' geeky, cute, and a little gullible. He always saw the best in people. Kouta was always concerned about his sister, he didn't anything to happen to her. Dustin was the one most effected by the Thunder Rangers and the one betrayed by one of the 'villains.' This never happened in Hurricanger to Kouta specifically. 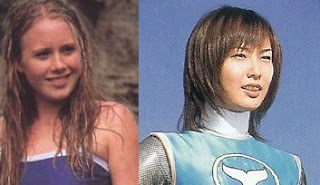 Tori Hanson (Blue Wind Ranger) / Nanami Nono (Hurricane Blue)
Tori was the first female blue ranger, to be succeeded by Madison in 2006. Nanami was actually the third female blue warrior, followed by Urara in 2005. Nanami was an aspiring singer, her manager trotted her around everywhere. She was sweet and caring, and was the one betrayed by a villain, not the Yellow warrior. Tori on the other hand is sarcastic and keeps her boys in check. Tori also became very jealous when other women were around her man Blake. 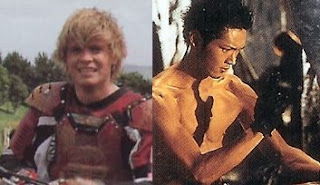 Hunter Bradley (Crimson Thunder Ranger) / Ikkou Kasumi (Kabuto Raijer)
The leader of the duo Goraijer, Ikkou is serious and a bit stubborn and doesn't care much for Yousuke at first. The Goraijer have a heavy rivalry against the Hurricanger, they want to be the best and don't care killing them, hence teaming up with the enemy. The Kasumi brothers' father was screwed up in the head, he trained his boys to kill each other, leaving one the victor (in theory). Ikkou was also given a deadly bug that was slowly killing him and he refused to take care of it. Ikkou is one of my favorite characters.

As for Hunter, he was much more severely toned down than Ikkou. He was the leader of the Thunder Rangers and he and his adopted brother were tricked into joining the bad guys, believing the Power Rangers' mentor killed their parents. He was then put 'under a spell' to try to destroy his brother. Hunter was just there really, no real character development, just a one-episode rivalry with Shane. 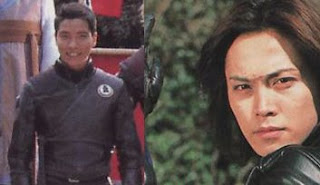 Blake Bradley (Navy Thunder Ranger) / Isshuu Kasumi (Kuwagata Raijer)
Kasumi followed his brother, he was shy around girls and quiet. He spent more time with the Hurricanger than his stubborn brother did. Even though he resented his father, it didn't mean he didn't feel free from his hold and felt extreme pride in his school's fighting style and ways. He was once influenced by his father's spear. He had a crush on Nanami but never told her. It was hinted she felt the same way.

Blake was a fun-loving smart aleck 'cool' guy. While Nanami and Isshu's love was never explored, Tori and Blake did date. Unlike their counterparts, Blake and Hunter immediately joined the main three. Instead of being consumed by his father's spear, Blake just trained with a special weapon with a former senior student, who Tori became jealous of. 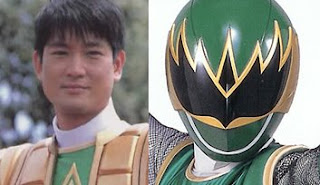 Cam Watanabe (Green Samurai Ranger) / Shurikenger
Shurikenger was unique in that he had no real identity. He was once Kagura Asuka, a great student that was chosen by a higher power for this honor, but unfortunately he would loose his identity and body. His body became Shurikenger. He spoke in a mix of Japanese and English, which obviously they couldn't translate to Power Rangers. So what Shurikenger did was take the identity of the guest star of an episode to trick the enemy or the heroes. Past Sentai heroes would guest star. Shurikenger, himself, was a comical character. He did end up dying.

Cam on the other hand, had been on the show since the beginning and later joined the fold. Cam's first counterpart is Oboro, the daughter of the ninja's mentor. He is smart, intelligent and sarcastic, and much older than the others. He traveled to the past, he gained the power from his mother, who is now deceased. Because of all the work, he created a holographic robot copy 'Cyber Cam' to work on the tech stuff. Well, definitely Shurikenger and Cam are different. 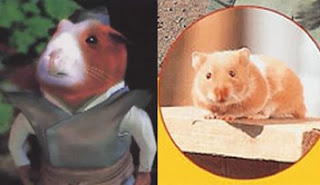 Sensei Kanoi / Mugensai
Both Senseis were accidentally turned into little furry creatures, only Sensei became a guinea pig and Mugensai became a hamster. The guinea pig was all CG, while the hamster was half a real hamster and half a horrible fat puppet. Mugensai had a gruff voice and kept secrets from the gang, he also was a bit bumbling. Sensei spoke a serene voice and was somewhat stubborn. Also, the main bad guy was his twin brother.

Posted by Lavender Ranger at 10:43 AM

shurikenger didn't die, he made an appearance in abaranger v.s hurricanger