Ohranger was about government officers who used technology driven by ancient power that fought an alien army of machines. Zeo was basically the teenagers we knew from MMPR fighting against the same army of machines. 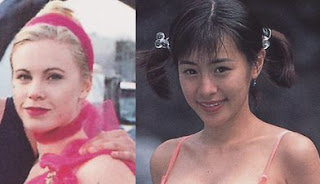 Katherine Hillard (Zeo Ranger I Pink) / Momo (OhPink)
Katherine joined the team in season 3 of MMPR, replacing Kimberly. Kat was from Australia and was put under a spell by Rita in order to take Kimberly's power coin and the Falconzord. She spied on the Rangers as a cat name PC at the humane society where Aisha volunteered at. She even became a monster [In Kakuranger, it was a fox] the Rangers had to fight. When Kimberly's life was in danger, she snapped out of it. Once becoming a Ranger, she and Tommy raided Zedd's palace, she was almost made evil again--she was also afraid of being rejected by the Zeo crystal by her evil past. She eventually started dating Tommy, after being properly dumped by Kim through a letter. Kat was much warmer than Kim, sweet and caring. Momo was bubbly and not afraid of being in a swimsuit. 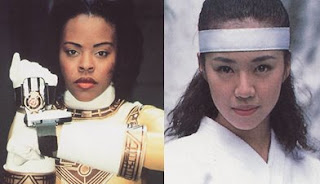 Tanya (Zeo Ranger II Yellow) / Juri (Oh Yellow)
Tanya was added just at the cusp of the rangers transferring to Zeo. Juri was not afraid of spying and pretending she allied to the enemy. Juri was much more stern and responsible than Momo. Tanya would never betray her friends and she was a bit gullible but knew her responsibilities. When she was offered to become a singer, she knew being a Ranger was more important. Zordon let her use her powers once to save her long-lost parents which she was tipped off were on an island. 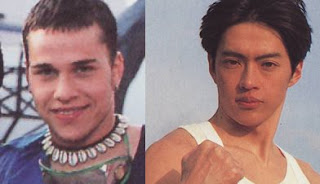 Rocky (Zeo Ranger II Blue) / Yuuji (OhBlue)
Yuuji was young and a bit more sensible than his teammates. Rocky became more of a joker, after having almost no personality when he replaced Jason in Season 2 of MMPR. It was also revealed Rocky was of Mexican hertiage. 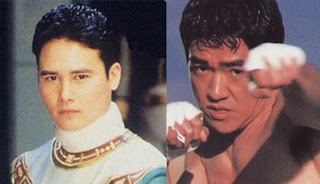 Adam (Zeo Ranger IV) / Shouhei (OhGreen)
Adam replaced Zack in Season 2 of MMPR. Adam was shy & sensitive and sometimes faltered at a challenge, like when he had to fight in a martial arts competition against Tanya's jackass ex-boyfriend. Shouhei was much more cocky, stubborn and confident. 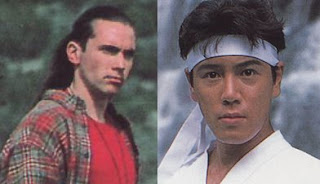 Tommy (Zeo Ranger I) / Gorou (OhRed)
Gorou is a strong and dependable leader. Tommy was the same leader he always was. When his teammates were danger, he went to the limit, even to the point of risking his life. In Zeo, he discovered he had a brother he never knew of a Native American tribe and he trusted him with his secret. 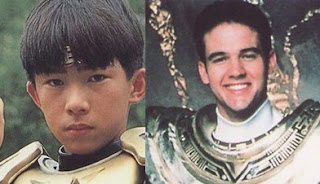 Riki (King Ranger) / Jason (Gold Ranger)
Riki is a legendary child-like hero who chased the enemies off Earth 600 millions years ago. Jason came back to the team when he was needed to become the Gold Ranger. The difference is obvious, Jason wasn't a immortal warrior who looked super young. However before he got the Gold Ranger powers, they belonged to a prince from the planet Triofia, who went to save planets that needed the help. Jason later gave the power back to him.
Posted by Lavender Ranger at 4:33 PM

I thought Zeo was a decent series. It's a real shame that it never got a Japanese dub. I'm sure it would have done well in Japan.

I also like that this team of rangers were international somewhat.