MMAR was a mini-series part of the third-season of MMPR. The Alien Rangers are also referred to as Aquitar Rangers by fans, because they are from the planet of Aquitar, a planet completely covered with water. They were summoned when the Power Rangers we know were turned into children... for the second time and their power coins were destroyed. Kakuranger were teenagers but ninjas. There is not much to compare since the Aquitar Rangers were ill-defined and there was not much character development. 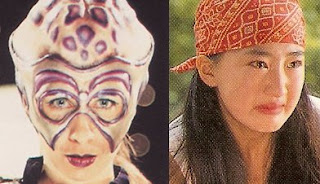 Delphine (White Ranger) / Tsuruhime (Ninja White)
Delphine is the stern and capable un-questioned leader of the Aquitar Rangers. She was somewhat motherly to the Power Rangers, even when they grew up. Tsuruhime is is the most knowledgeable and capable as a leader than Ninja Red. She also had to put up with her dad being evil. The major difference between them was that Tsuruhime was younger than Delphine and her femininity was more pronounced. They were both the first female leader in both franchises. They would be followed by Pink in 2000/2001. 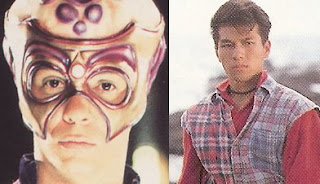 Aurico (Red Ranger) / Sasuke (Ninja Red)
Sasuke was agile, reckless and didn't pay much mind to his flaws, he was also loyal and good-hearted. As far as we can tell, Aurico devises strategies. 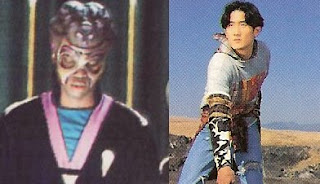 Cestro (Blue Ranger)/Saizou (Ninja Blue)
Cestro was brainy and an inventor, so he got along well with Billy. He was the first African-American Blue Ranger, blue would be bestowed to African-American characters two times after him (T.J. in 1998 and Ethan in 2004). Saizou is one of the comedians of the group and likes to help others and children. Major differences is that Cestro was much more concentrated with technology and intelligence, while Saizou was more socialable. Cestro was ignorant when it came to Earth customs. 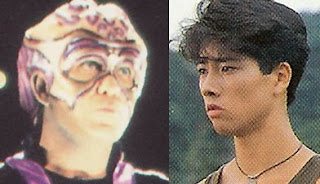 Corcus (Black Ranger) / Jiraiya (Ninja Black)
Jiraiya was born in Los Angeles and is half-Japanese and speaks English and struggles with his Japanese. His father was a police officer, was killed years ago by man (who was in an agreement by the enemy to save his daughter). He first worked as a spy in order to help the team. Corcus was the one that got the less character development. 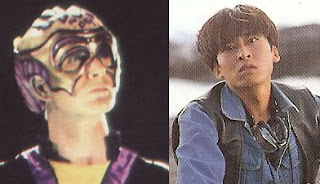 Tideus (Yellow Ranger) / Seikai (Ninja Yellow)
Seikai is a joker and indecisive and he's driven by desire for food, sleep, and women. Tideus was a bit cocky, a show-off but that was it. He was the first male Yellow Ranger, followed by Dustin (2003) and Chip (2005).

Ninjor/Ninjaman
I am including Ninjor because Ninjaman is part of Kakuranger. Even though Ninjor never interacted with the Aquitar Rangers in MMPR, it was alluded to that their powers were connected to Ninjor somehow. Ninjaman helped the Kakuranger, he was much like a sixth ranger but he is now considered among the powered allies (with Gunmajin, Signalman, Zuuban, etc.). He would change into SamuraiMan when big. Ninjaman was a pupil of the big three gods, which we know as Ninja Megazord, Shogun Megazord and Falconzord and was tricked by the big bad guy Daimaou. Even though Ninjaman was a big ignorant, Ninjor was stuck up and spoke like a Dudley Do-Right (which annoyed fans). The exclusion of Dulcea and inclusion of him, drove fans to the comedic conclusion that Ninjor was Dulcea in disguise (not seriously of course).

Posted by Lavender Ranger at 4:01 PM