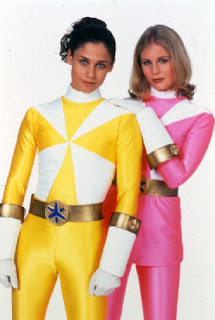 When the Power Rangers first came out, people were curious to know why the Pink Ranger had a skirt and the female Yellow Ranger didn't have one. One of the many concerns fans have had about the 15-year running series is the increasing gender bias. Through the years, the females have not gotten motorcycles and in the toyline, mostly ignored. Since 2005, there are only two figures of each female ranger in the whole line. While the male rangers, especially the red ranger (which is another issue fans have) gets around 30 or so products. Many would just say this is because it is a Boys toyline and that is the bare truth. Since 2001, Bandai America (that produces the figures) claim the Pink Ranger sells less than all other figures. Since then, the female rangers are spotlighted on eBay because they are hard to find in stores.
[The picture above is Sasha Craig as Kelsey Winslow and Alison MacInnis as Dana Mitchell in 2000's "Power Rangers Lightspeed Rescue."] 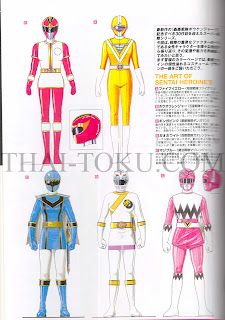 The reason that five of twelve odd female Yellow Rangers had no skirts when their female buddy had a skirt is because of the source: the Japanese series Super Sentai. The first series to be adapted to make "Mighty Morphin Power Rangers" was "Kyoryu Sentai Zyuranger" (Dinosaur Squadron Beast Ranger), which had only one female. The yellow ranger was male, funny enough his name was Boy. Mostly because he was the youngest. But there are some series (of Super Sentai) that have had two females. They could have add skirts but then there would be a conflict with the footage. I guess they rather dealt with disappearing boobs than disappearing skirts. Now, why did they have to go through all the trouble of adding a female if it is a male-orientated show?

Maybe in the beginning, they did want both boys and girls to be into it. And now, it is probably tradition. Since Disney took over in 2003, it hasn't been an issue because there have been two females in the teams of five. In the cases that the show started with three heroes and eventually get to six or five, there would just be one female and no other was gender changed. Actually there was only one series in Power Rangers that the girls has no skirts... "Power Rangers S.P.D." That one had 6 females (Pink, Yellow, Red, Orange/White, Pink and Silver/Navy), all had no skirts. While in Super Sentai, there are plenty series that the girls had no skirts. Despite common belief, yellow is not always female in Sentai. More males have had that designation.

I think the reason people wish females in Power Rangers got a little more respect is probably because in some choice times, female characters are allowed to cross the line of the traditional roles in both Super Sentai and Power Rangers. For example in Power Rangers, there has been three female leaders. White Alien Ranger in 1995, Pink Time Force Ranger in 2001, and Red S.P.D. A-Squad Ranger in 2005. Funny thing about her (above), she didn't have a Japanese predecessor and producers had to convince Disney to have a female red ranger. It is obvious they hadn't decided on her gender until later in the series since in earlier episodes, the red ranger was heard to have a male voice. Fans sum this up as her disguising her voice to fool the enemy. Ultimately, I think they let it happen because she was not part of the main team, nor where there any toys based on her or her team. Best thing was that particular team was the first 'evil' team that was not under a spell. They actually chose to oppose the forces of good on their own free will. Super Sentai producer Hideaki Tsukada was recently asked about the possibility of having a female red ranger leader and he said it wasn't completely out of the question, "But still unlikely. For example, the fact that Super Sentai is a show for 3 to 5 year old boys, having a female leading character is not supported by the toy shops." It all goes down to toy marketing and sales, both series are aimed to boys. 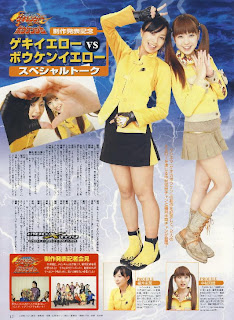 The same plight that have gone to the females in Power Rangers have come to Super Sentai. Lately female warriors have gotten the shaft in the toy lines. But not so much to storylines. To the current incarnation that will end in February, "Juken Sentai Gekiranger" (Beast-Fist Squadron Fierce Ranger] that will be adapted into "Power Rangers Jungle Fury" that same very month, GekiYellow (above) is the leader. Some fans have complained that even with that, she is not getting very much focus and it could be that she was given the leader position as lip service. The picture above is about the upcoming teamup 'Gekiranger Vs. Boukenger' coming in March. Each year the previous team meets with the current team in a straight to video special. Next to her is Natsuki, Bouken Yellow from 2006's "GoGo Sentai Boukenger" (Rumbling Squadron Adventure Ranger) and she had special focus in the series. People liked her that she was a bubbly and childish. She is a fan favorite.

[The picture above is Mina Fukui as Ran Uzaki and Chise Nakamura as Natsuki Mamiya.] 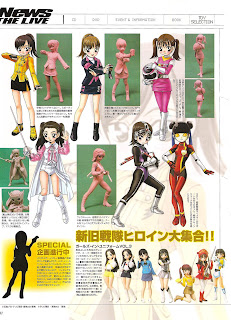 In 2007, Bandai Japan released special figures of various female characters of the entire Super Sentai franchise called "Girls in Uniform". They vary from good girls, villains, and allies. They have gotten to Volume 4 and volume 5 is on its way. If you are not familiar with these toys, they do the same with other Anime and video game series like Transformers, Gundam, etc.; they come in a small box and it is surprise who turns up. And there is sometimes a special limited figure, you are lucky enough to find. 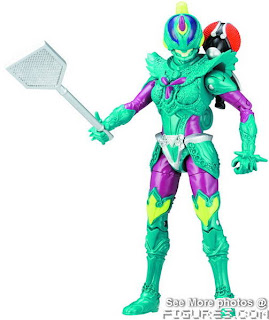 And recently thanks to Bandai America, they are redeeming themselves very much this year with the Jungle Fury toyline by reducing the re-painting and repackaging figures and having the figures more or less show accurate; and morphers and zords that are closer to the magnificent Japanese imports. Above is Camille, who in Japan is known as Mele and her packaging here says "Melle." She is the first female villain to get an action figure since Divatox in 1997! She has a zord (a small Chameleon) and was pretty popular in Japan but unfortunately she never got a figure. The only promotion she got was a small picture of her along with her male partner Rio/Dai Shi on her zord box but of course overshadowed by the big male black lion. In the PR line, Dai Shi has a sword with a Chameleon-theme and the miniature megazords come with a Chameleon zord. Hopefully her zord will be released as well. The negatives to her figure is the lack of paint in her details and instead of packaging her Sais, we get a fly swatter. She is double-billed with a fly figure Flit (above) and hence the swatter. Fans figure he is mentioned to attract boys as an incentive. She even has swatting action, how domestic.

Previously Posted on December 13, 2007
on Spanengrish Ramblings
but this post is severely modified