I am on a roll now. Since writing "Gender Bias in Power Rangers" and "Transgender Characters in Popular Culture" I felt like dealing with female villains in both series and the fact that the Power Rangers change male monsters to female. Also, the diverse male characters in Super Sentai. 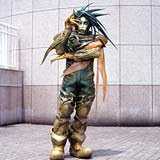 In partially all Super Sentai series, there is a main villainess and the same in Power Rangers. But when it comes to the 'Monsters of the Day,' there is a only about three to two female monsters. "Kakuranger" (1994) had eight female monsters, making them the most. I did count the series from 1991 to 2007. In Power Rangers, they convert some feminine-looking male monsters to female. For example, above left male Incubus from "Magiranger" was changed to female Gnatu for "Power Rangers Mystic Force"; male Hanasakkadoshi from "Hurricanger" was changed to female Florabundacus for "Power Rangers Ninja Storm". And these are just a few of the changes. Sometimes, they don't even use the actual female monster from the Japanese series and feel short so they make one guy into a girl. For example, from the 8 female monsters of "Kakuranger," only 4 made it to "Power Rangers." I think they do it to have balance but just have a few female villains is not going to do much. 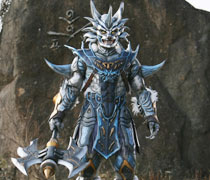 Most recently, the one above doesn't look female at all but they changed "Boukenger"'s Ouga to Crazar in "Power Rangers Operation Overdrive," the name doesn't even sound feminine. Most of the time the actor inside the suit is male. Even for the female rangers. There are rare times and more often up to recently that actual women don the female suits. And recently in "Gekiranger," a female is the suit actor for their male cat mentor Master ShaFu. 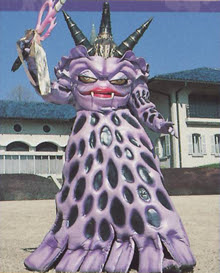 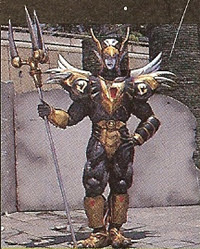 Some cases, they have no choice. Like the monster above left looks very female but was Wedding Dress Org actually male in the original "Gaoranger." In that same series, there was a intersex character Rasetsu that spoke in both female and male voice and surprisingly made it for "Power Rangers Wild Force" as Mandilok. The original American voice of Rita Replusa even voiced Mandilok's female aspect for a while. Strangely enough the female Jin (monster above right) in "GoGo Five" was converted to male in "Power Rangers Lightspeed Rescue." 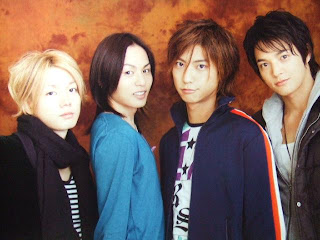 As for the male characters in Super Sentai, some are allowed to be artistic or hairdressers or look feminine. Some of those include Dairanger's Kazu, Abaranger's Yukito, and Gekiranger's Retsu and Ron (above left). In fact, many of the male heroes these days all look androgynous but that is the 'look' now in Japanese popular youth culture. Many times, ignorant people mistake them for girls. But us used to Anime and Tokusatsu are used to it. Actually the picture above is non-character time, the actors are in their regular clothes.

Posted by Lavender Ranger at 12:18 AM