Kamen Rider the First and the Next 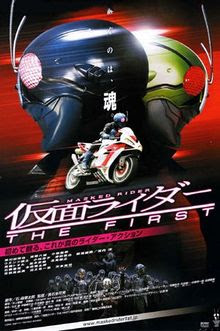 Kamen Rider THE FIRST
Kamen Rider THE FIRST is an adaptation of the first Kamen Rider series, though there are many differences between the film and the original program; some of these, however, are due to a closer reliance on the Kamen Rider manga (written after the show) by Shotaro Ishinomori. Written by Toshiki Inoue and directed by Takao Nagaishi, the film stars Masaya Kikawada as Takeshi Hongo/Kamen Rider 1 and Hassei Takano as Hayato Ichimonji/Kamen Rider 2. The film was released theatrically on Dec 5, 2005, though it had several early screenings around Tokyo during the previous two months, on Oct 23, at the Tokyo Film Festival. 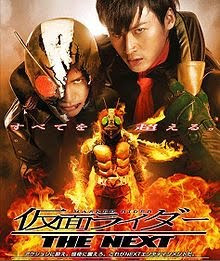 Kamen Rider The Next
The film borrows elements from the Kamen Rider V3 television series and is a sequel to the Kamen Rider The First movie. Actor Kazuki Kato, who portrayed Daisuke Kazama/Drake in Kamen Rider Kabuto, portrayed Shiro Kazami/V3. Both Masaya Kikawada and Hassei Takano reprise their roles as Takeshi Hongo/Kamen Rider 1 and Hayato Ichimonji/Kamen Rider 2, respectively. It was given a PG-12 rating for its brief nudity and violence. The film was released on October 27, 2007.

Two years after the events of Kamen Rider the First, murders occur while pop star Chiharu's "Platinum Smile" is being played, becoming an urban legend. Meanwhile, Hongo is a high school teacher with one girl Kotomi catching his attention, who was best friends with Chiharu. By the time Hongo and her find a dying "Chiharu", they learn she's actually an impostor as Shocker to kill Hongo, forcing him to reveal himself in as KR 1. Meanwhile, Hayato's body is rejecting of the cybernetic changes which made him KR 2. Hongo and Kotomi locate her brother Shiro Kazami, former president of ExaStream, which is tied to its staff's mysterious disappearance. The Shocker Riders battle Kamen Rider on as Kazami arrives as Shocker Inhumanoid code-named "V3". V3 and the Shocker Riders take down KR 1 until KR 2 re-appears to cover KR 1's escape. But after realizing his "sister" was an impostor, Kazami reveals the incident at ExaStream was a Shocker experiment of Nanobots designed to convert all humans in Japan into cyborgs, with him being a survivor of the experiment.

The 3 Riders later learn that Kotomi found the other girl, revealing what happened to the real Chihar, horrifying Kazami. Kotomi uses Platinum Smile to communicate with Chiharu, learning that she's still alive as the "ghost". After Kazami reveals to Hongo that Shocker's foreign branch brought a shipment of nanobots to spread across the nation, KR 1 arrives to stop the convoy while battling Scissors Jaguar, who controlled Nanobot Operation, with KR 2 backing him up in an all out fight for the nanobots. Though the Double Riders were overwhelmed, V3 arrives to support them. While the Double Riders kill Scissors Jaguar, V3 manages to destroy Chainsaw Lizard and the nanobots before coming face to face with Chiharu, mutated into a monster as she pleas her brother to kill her. Though reluctant to do it, Kazami executes the V3 Punch to honor his sister's wish to die.
Posted by Lavender Ranger at 10:21 AM