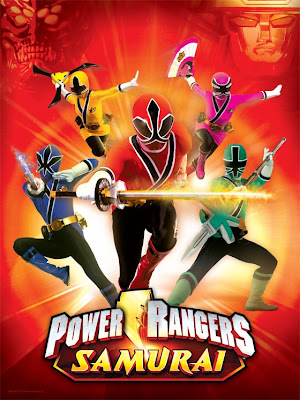 Picture above from Bandai America Blog
I am freaking out already, Saban Brands announced (Variety Article) there will be 2 years of Power Rangers Samurai. They said they would keep the same theme. While themes changed annually in years past, the Samurai theme will extend for two years. "We always introduce new elements throughout the course of the season, including the occasional new ranger," said Elie Dekel (Saban Brands), adding that Saban will keep the five original rangers. So now a Goseiger adaption might not come along until 2013 instead of 2012. But if it could work out in different ways:
Posted by Lavender Ranger at 1:19 PM

YES! Time to get it even with MMPR once and for all! (almost) Long live 21st century toku!

Will they still be using the female red ranger?

Psowill, I believe so since the casting call asked for a 'princess' and 'princess' was the nick name of the female Red in Shinkenger. And she IS in the footage, like four episodes or so, so why not? But I would love is for Bandai America to release her figure, at least in a set.

:) Ah cool. yeah I would love to see a matching set. lol Be interesting if Mcfarlane figures did some power ranger figures.

@Psowill, Bandai Japan modeled S.I.C. after McFarlane so maybe they can bring it to America.

Soooo... Yes! Samurai! So gramatically wrong! Yeah, we've seen how nick published avatar and iCarly in 20 episode seasons, which made new eps way more wishable. I also think that 2 year samurai can help goseiger for 20th anniversary, since colors and suits match a lot... Or maybe they will keep it for 25th anniversay, who knows...

All i hope is they do like they did with avatar: always keep the episodes in "to be continued" so peopole will wish more the new ep and more peopole will watch it!